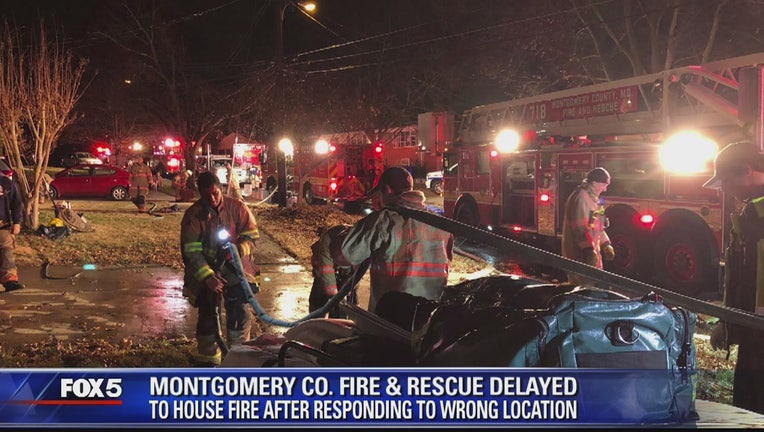 WHEATON, Md. - Fire crews responding to a house fire Friday in Montgomery County were mistakenly sent to the wrong street, in the wrong city.

The fire happened just after 10 p.m. Friday night in the 2000 block of Prichard Road in Wheaton, where firefighters eventually rescued two people and a dog.

An investigation revealed that the fire started in the bedroom and there were no working smoke alarms in the house.

Officials told FOX 5 on Saturday that responders were first told to go to 2005 Piccard Drive in Rockville, which is heard on the dispatch calls, obtained from the website, Openmhz.com.

The initial call from dispatch giving the Rockville address is heard at 10:21:24p.m.

At 10:28:27 p.m. dispatchers are heard calling the crew back, letting them know the correct address is 2005 Prichard Road in Wheaton.

At 10:29:50 a different fire crew shows up to the correct address of the house fire in Wheaton.

FOX 5’s Ayesha Khan spoke with Montgomery County Fire Dept. spokesman Pete Piringer, who said that the department is not yet sure about how and why fire crews were sent to the wrong address in the first place. It’s something he said they are looking into while communicating with county police who oversees the 911 call center.