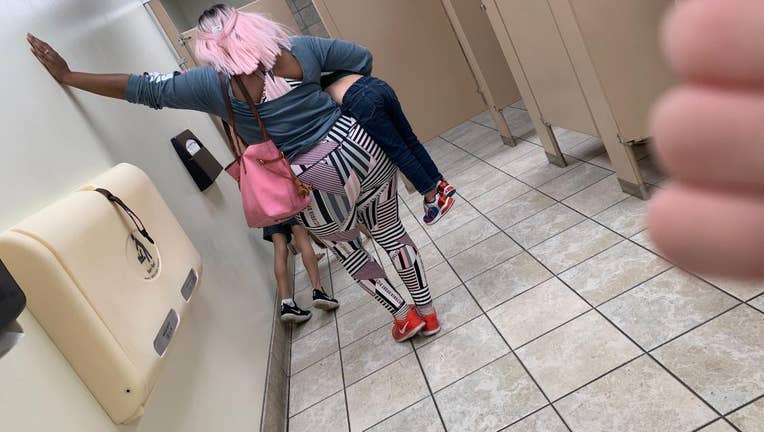 A mom makes her son do push-ups in the bathroom of a Hobby Lobby store in Killeen, Texas on Feb. 22. (Photo provided by Molly Wooden)

KILLEEN, Texas - A mom in Texas earned viral praise on social media after she was captured in the bathroom of a Hobby Lobby store giving her son a lesson on respect.

Molly Wooden, another mother who caught the moment on camera and posted it to social media on Feb. 22, lauded the unnamed mom for her parenting skills.

"To the woman in the Hobby Lobby bathroom. If my hands weren’t full of children I would have applauded you. As your son gave you the back talk of the century, you stayed calm and collected while adding 10 more push ups to his already growing number," Wooden wrote in a Facebook post.

"We need more parents like you, who aren’t afraid to parent their own children because of what someone else might think. He said 'Mama, this is the bathroom floor, grossssss.' She said 'maybe you shouldn’t have been acting obnoxious. (They have soap for a reason.) 10 more.'"

Wooden encouraged the "random woman of Hobby Lobby" to "keep on raisin' them boys right!"

Her Facebook post apparently struck a chord with thousands of parents, many of whom shared the photo and commented with their own words of support and encouragement for the mother's parentling style. "YOU GO GIRL!!" one commenting mom wrote. "Well played! Don't play with Mama! Respect has to be taught!!!!" wrote another.

Wooden later updated her original post to say that since the photo went viral, she had found the Hobby Lobby mom and connected with her "through the power of social media."

"She promptly thanked me for posting this, says she appreciates the support and positive comments, and we're hoping to grab coffee sometime... while supervising push ups that is," Wooden wrote.