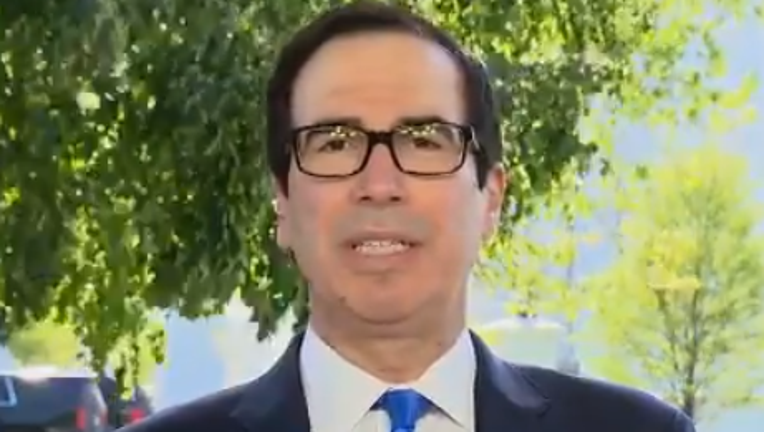 WASHINGTON - Treasury Secretary Steve Mnuchin offered a sobering take on the current state of American unemployment during the coronavirus pandemic, but remained optimistic that circumstances will take a turn for the better later in the year and the Trump administration is there to help in the meantime.

Mnuchin said the ongoing shutdown would make it unsurprising if "half of the people didn't work," but insisted this is a temporary situation.

Mnuchin, as he has done before, emphasized that the current economic crisis is the result of the government shutting down the economy due to the pandemic, as opposed to any underlying economic issues, which was the case during the Great Depression.

As far as the risks of reopening too soon, Mnuchin said he was not overly concerned about economic repercussions because he believes the reopening is being handled responsibly. He also warned that no reopening could be even worse.

"If we do this carefully, working with the governors, I don’t think there’s a considerable risk," he said. Matter of fact, I think there’s a considerable risk of not reopening. You’re talking about what would be permanent economic damage to the American public and we’re going to reopen in a very thoughtful way that gets people back to work safely that keeps people social distanced.”

The secretary said that the Trump administration remains committed to helping the public during the difficult time. President Trump has said he was not "in a rush" to sign another massive relief bill, despite House Speaker Nancy Pelosi's intention to introduce one as soon as this week. Mnuchin explained that being slow to spend more is not the same as being unwilling.

“What the president and I are now saying is we’ve spent a lot of money, a lot of this money is not even into the economy yet, " Mnuchin said, adding, "we just want to make sure that before we jump back in and spend another few trillion of taxpayers’ money that we do it carefully."