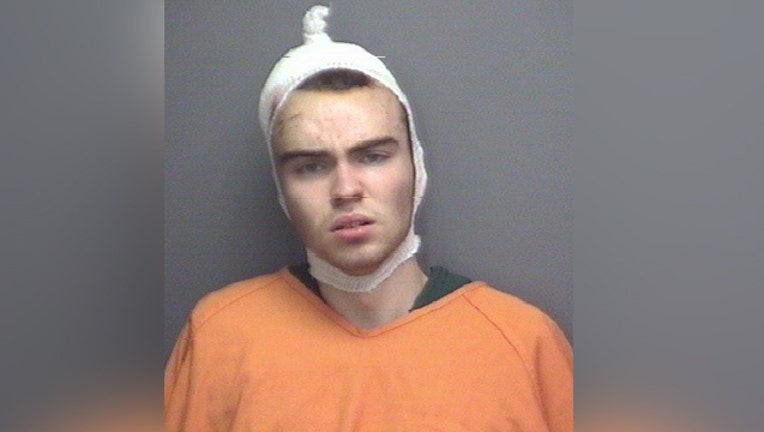 FOX NEWS - A minor league baseball player’s wife, his son and his mother-in-law were found murdered Tuesday allegedly by his brother-in-law in their rural Virginia hometown, according to reports.

Deputies found the body of a woman in a driveway and the bodies of another woman and a child inside the home in Keeling, Va., prompting a three-hour manhunt for the suspected killer, USA Today reported. The player is reportedly Tampa Bay Rays minor leaguer Blake Bivens.

An unarmed and naked Matthew Bernard, who is Bivens’ late wife’s brother, was found running through the woods just after noon, the Danville Register & Bee reported. The 19-year-old was arrested and charged with three counts of first-degree murder, Pittsylvania County Sheriff’s Office said.

In a video obtained by WSET-TV, a naked Bernard is seen being chased by an officer outside the Keeling Baptist Church. Then the suspect runs to the parking lot and seemingly attempts to strangle a man who was getting into his truck. The officer maces the suspect and chases after him before finally bringing him into custody.

A minor league baseball player’s wife, his son and his mother-in-law were found murdered Tuesday allegedly by his brother-in-law in their rural Virginia hometown, according to reports.

The Pittsylvania County Sheriff’s Office has not released the identities or the causes of death for the three victims. ESPN’s Jeff Passan was the first to report the Virginia triple homicide was connected to Bivens. The Tampa Bay Rays later released a statement that Bivens “suffered a terrible family tragedy in southern Virginia.”

“Our hearts are broken for Blake. We are grieving with him and will support him any way we can. We ask that everyone respect the privacy of the Bivens family and the Biscuits family during this extremely difficult time,” the statement read.

Bivens, 24, pitches for the Montgomery Biscuits, a Double-A affiliate of the Tampa Bays Rays minor league baseball division. He began his baseball career after he was selected by the Rays out of George Washington High School in Danville, Va., in the fourth round of the 2014 draft, USA Today reported.

The Montgomery Biscuits canceled a doubleheader Tuesday with the Chattanooga Lookouts and will return to Montgomery, Ala., where they will take on the Pensacola Blue Wahoos Thursday, AL.com reported.