A bus full of migrants sent by Texas Governor Greg Abbott arrived in Philadelphia early Wednesday morning as city officials greeted the group and provided them with supplies.

PHILADELPHIA - A bus full of migrants sent by Texas Governor Greg Abbott arrived in Philadelphia early Wednesday morning as city officials greeted the group and provided them with supplies.

FOX 29's cameras were rolling when a group of migrants, including children, from Cuba, Colombia and Nicaragua arrived at 30th Street Station around 6:15 a.m. on Wednesday.

Twenty-eight migrants, 23 adults and five children, were transferred to a SEPTA bus after a 28-hour trip from Texas, and brought over to the Lucerne Street Shelter, where they will receive aid from the city.

"Some of them have been detained for over a month families have been separated," said Rossana Arteaga-Lopenza, President of Delaware Valley's Casa de Venezuela. "It's a difficult, emotional, psychological toll, physical toll, so we're trying to give them the space that they need."

In total, 19 migrants entered the intake facility and a child was accompanied to CHOP by an adult. Philadelphia Health Commissioner Dr. Cheryl Bettigole said having medical evaluations done before the bus departed could have prevented the child from needing emergency medical treatment.

Five people -including two children - reportedly staying in Philadelphia of the 28 migrants who arrived Wednesday. The other passengers have final destinations in other parts of Pennsylvania, New Jersey, New York and Ohio.

"I feel really good, really happy," said 24-year-old Georgina, a migrant from Panama. "I'm staying with my family in Philadelphia."

Officials say seven have already departed on their own, as 14 adults and two children are still making arrangements through the city.

Migrants from Texas arrive in Philadelphia

A bus full of migrants sent to Philadelphia by Texas Governor Greg Abbott has arrived in the city. FOX 29's Steve Keeley has the details.

In a press conference Wednesday, city officials stressed that each migrant had been inspected, fingerprinted and legally pardoned into the United States to seek asylum prior to their arrival in Philadelphia.

The city will now provide temporary housing, and help the families make it to their final destination. However, they are asking residents to help support the families with monetary donations to the Philadelphia Welcoming fund.

The city was originally prepared to welcome 52 migrants who were expected to arrive as early as Monday, but Abbott's office later said migrants were not being sent to Philadelphia.

"It is sad and outrageous that Gov. Abbott and his administration continue to implement their cruel and racist policies using immigrant families, including children, as pawns to shamelessly push their warped political agenda," Kennedy said during a press conference Wednesday.

Kenney said he believes its possible that more buses will follow with additional migrants. However, the mayor did not have any information on scheduled trips.

Brown says his team was present to welcome the migrants and provide them with coats, blankets, food and coffee, and an ambulance arrived to give medical attention to a child who was sick.

"Philadelphia. The City of Brotherly Love. We showed up and showed out. We were here to welcome these immigrants with open arms," Brown said.

City officials say Philadelphia had been preparing for asylum seeks since the summer, and were ready to welcome the families. 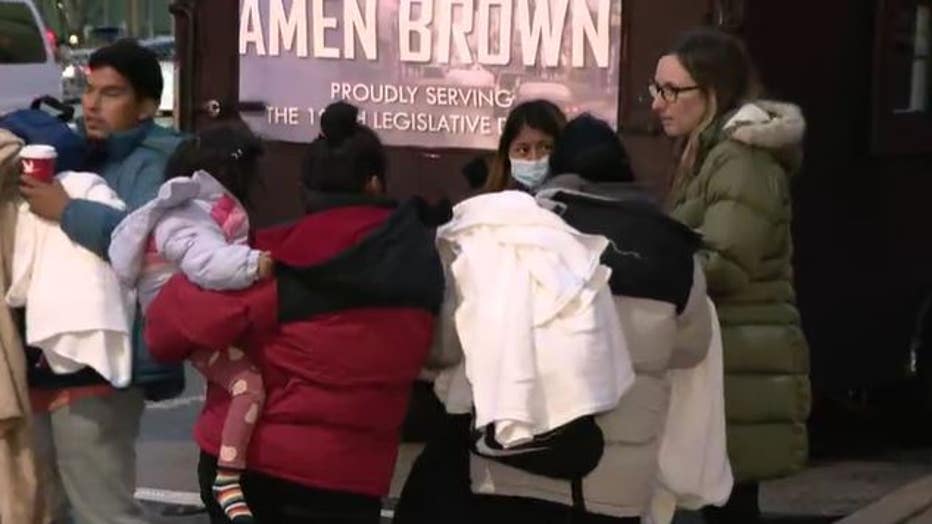 A group of migrants arrive in Philadelphia on a bus sent by Texas Governor Greg Abbott.