WASHINGTON - First lady Melania Trump broke her silence Monday about the deadly siege of the U.S. Capitol last week, condemning the violence by which she said she is "disappointed and disheartened," and mourning the police and supporters of President Donald Trump who died in the attack.

"Our Nation must heal in a civil manner. Make no mistake about it, I absolutely condemn the violence that has occurred on our Nation’s Capitol. Violence is never acceptable," Trump said in a lengthy statement posted to the official White House website.

Trump said "my heart goes out to" both the Capitol Police officers and pro-Trump supporters rioters who died, either during or following the assault. But she also lashed out at people she said have used the tragic event to spread "salacious gossip, unwarranted personal attacks and false and misleading accusations about me."

"I am disappointed and disheartened with what happened last week. I find it shameful that surrounding these tragic events there has been salacious gossip, unwarranted personal attacks, and false misleading accusations on me — from people who are looking to be relevant and have an agenda," Trump said.

The first lady did not say who she was referring to. Last week, Stephanie Winston Wolkoff, the first lady's former friend and one-time assistant at the White House, wrote an editorial accusing Mrs. Trump of being "complicit in the destruction of America."

Their friendship ended bitterly after Wolkoff, who had worked on arranging festivities for Trump's inauguration in 2017, said the first lady failed to defend her after questions arose about inaugural spending, now the subject of federal and congressional investigations.

In the post Monday, the first lady said, "This time is solely about healing our country and its citizens. It should not be used for personal gain." 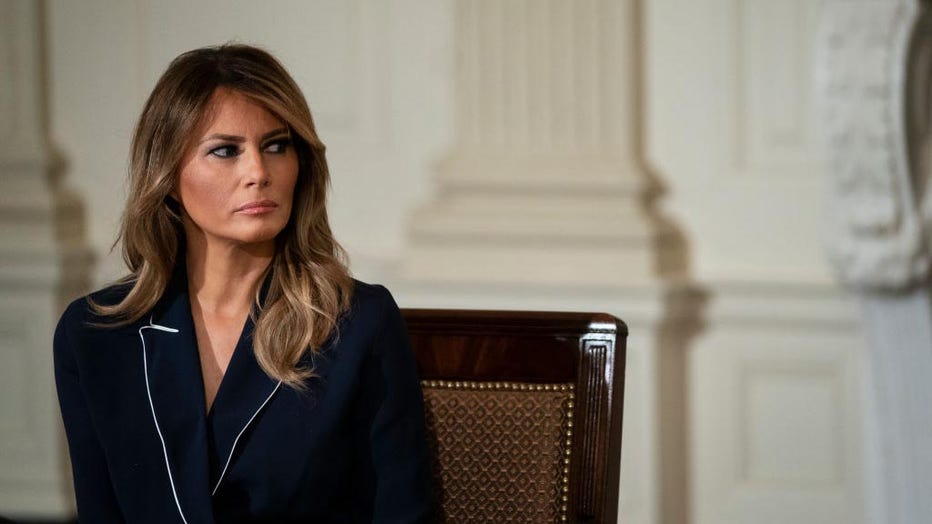 First lady Melania Trump attends a meeting of the President's Task Force on Protecting Native American Children in the Indian Health System in the State Dining Room of the White House on July 23, 2020 in Washington, D.C. (Photo by Drew Angerer/Getty

She also urged Americans to focus on what unites them rather than what divides. She implored people "to stop the violence, never make assumptions based on the color of a person’s skin or use differing political ideologies as a basis for aggression and viciousness."

"It is inspiring to see that so many have found a passion and enthusiasm in participating in an election, but we must not allow that passion to turn to violence," she said in the statement.

She added that it's been the "honor of my lifetime" to serve as first lady. Biden is set to be sworn in on Jan. 20.

The first lady’s comments come five days after the mob stormed the Capitol in support of the president’s false claims of election fraud. Five people, including a Capitol Police officer, died. A second Capitol Police officer died by suicide after responding to the riot, though it was not clear whether his death was connected to Wednesday’s events.

White House Press Sec. Kayleigh McEnany condemned the group of violent rioters at the U.S. Capitol and said those working in the White House would ensure an orderly transition of power.

The president has spent the weeks after losing the November presidential contest spreading false claims that the balloting was tainted by massive fraud and that the election was stolen from him. Numerous state and federal officials, including former U.S. Attorney General William Barr, a Trump ally, said there was no evidence of fraud on a scale massive enough to have affected the outcome.

The U.S. House and Senate had convened in a special joint session of Congress Wednesday to tally the Electoral College votes and certify President-elect Joe Biden as winner. Some Republican allies of Trump challenged or had planned to challenge the results in a futile effort to overturn the results.

Pro-Trump protesters clash with police inside US Capitol

During the normally mundane and routine process of certifying the next U.S. president, the violent mob overpowered police, broke through security lines and windows and rampaged through the Capitol building, forcing lawmakers to scatter and halt the joint session.

Video captured the Capitol's attackers pinning a bloodied police officer in a doorway. Another officer was mortally wounded with a blunt weapon, and a third was body-slammed over a railing into the crowd.

"Hang Mike Pence!" the insurrectionists chanted as they pressed inside, beating police with pipes, according to the Associated Press.

Makeshift gallows were erected outside the Capitol, complete with sturdy wooden steps and the noose. Guns and pipe bombs were found stashed in the vicinity.

Countless smartphone videos emerged from the scene, much of it from insurrectionists themselves, and more lawmakers recounted the chaos that was around them.

Trump has faced growing calls for his resignation and a possible second impeachment for his role in inciting Wednesday's violence.