DMV students use poetry to cope with gun violence

As a violent summer rages on, many young people are still reeling from the massacre inside a Texas classroom. FOX 5's Lindsay Watts spoke with two DMV-area students who have channeled their emotions into writing.

POTOMAC, Md. - As a violent summer rages on, teens from Montgomery and Prince George's counties are channeling their emotions into writing.

Jordyn Hoffman, a rising sophomore at Winston Churchill High School in Potomac, and Anaya Davenport, a rising freshman who most recently attended Dwight D. Eisenhower Middle School in Laurel, don't know each other, but they both wrote about their frustration, sadness and desire for change following the mass shooting at Robb Elementary School in Uvalde, Texas.

Hoffman said hearing about the shooting made her worry for her 8-year-old sister.

"Because she was around the age of a lot of the kids who had died," said Hoffman said. "All I could really think about was that could've been her. She could go off to school one day and I could never see her again."

Six weeks since the Uvalde massacre, which left 19 children and two teachers dead, there have been over 100 mass shootings in America bringing the total to more than 300 for the first half of 2022 according to the Gun Violence Archive.

In D.C. over July 4th weekend, police said 19 people were shot, five fatally, in multiple acts of violence across the city. Seven people were killed at random in a mass shooting at a July 4th parade in Highland Park, Illinois, and police in Richmond said Wednesday a tipster may have prevented a mass shooting planned for July 4 in the city.

Davenport said fear of becoming a victim of violence takes a toll.

"That just impacts your whole mindset," Davenport said. "Like what if I go outside and I get hurt. What if I go into school and somebody may threaten me."

Despite such a bleak present, both young women said they still have hope this country will change and that they will be the ones to make it happen in the future.

"I fully believe that my generation will be able to stop these types of things," Davenport said.

Barricaded in the bathroom,

Cause what do you do,

When you hear a seven year old scream

And gunfire in our streets;

Who was doomed to be seen; 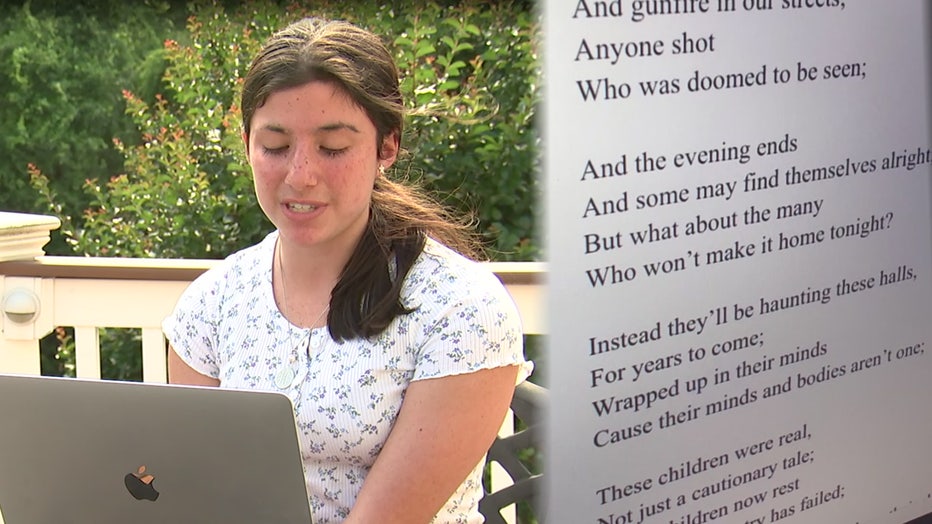 And the evening ends

And some may find themselves alright;

But what about the many

Who won't make it home tonight?

Instead they'll be haunting these halls,

For years to come;

Wrapped up in their minds

Cause their minds and bodies aren't one:

These children were real,

Not just a cautionary tale;

Cause their country has failed;

But the people will continue to shrug their shoulders,

And we'll forgive and forget

But forget at what cost;

These battles will continue,

This civil war will wage on,

Until the fateful day we realize

That something should already be done.

Anaya Davenport's speech is called "When will it happen?...."

Do you ever wonder why things happen to you? Your community? The crazy world we live in?

Do you ever question why we are defined by our gender and/or race?

Do you wonder why people are judged by their appearance, race/ethnicity, religion, or political views instead of their character? Why do these elements determine a person's identity alone?

Do you ever fear for your safety because of the abysmal events occurring in our communities?

Do you speak up when laws are made that affect the safety and progress of your community by government officials? 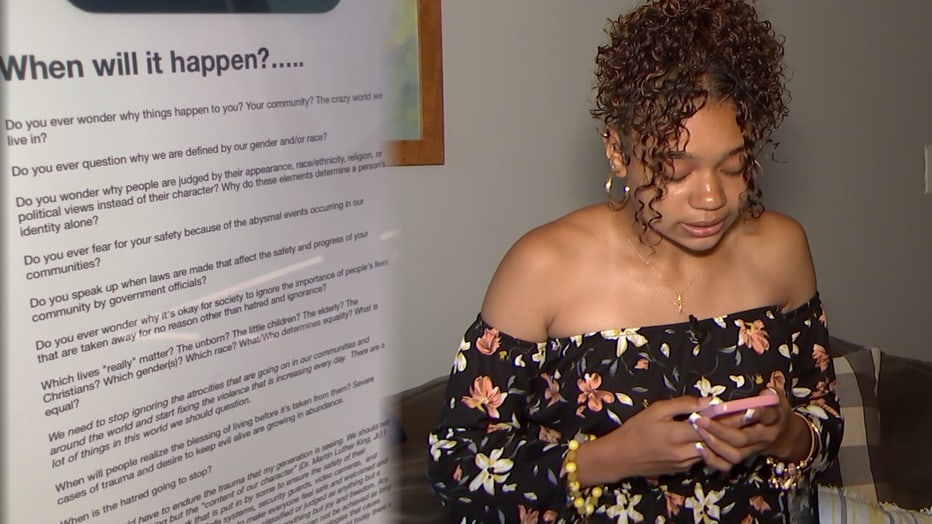 Do you ever wonder why it's okay for society to ignore the importance of people's lives that are taken away for no reason other than hatred and ignorance?

Which lives "really" matter? The unborn? The little children? The elderly? The Christians? Which gender(s)? Which race? What/Who determines equality? What is equal?

We need to stop ignoring the atrocities that are going on in our communities and around the world and start fixing the violence that is increasing every day. There are a lot of things in this world we should question.

When will people realize the blessing of living before it's taken from them? Severe cases of trauma and desire to keep evil alive are growing in abundance.

When is the hatred going to stop?

Nobody should have to endure the trauma that my generation is seeing. We should not be judged by anything but the "content of our character" (Dr. Martin Luther King, Jr.) I feel that the amount of work that is put in by some to ensure the safety of their community is just not enough. Safe systems, security guards, video cameras, and programs for the youth are not enough to make everyone feel safe and welcomed and cared about by this union. Nobody should be classified or judged as anything but a human being. We as humans shouldn't have to feel anything but joy and freedom. Any pain we face should be temporary. Unfortunately, this goal can not be achieved as long as people continue to stay blinded by inimical and prejudicial ideologies that cause people to feel the need to commit atrocities to the innocent.. In the world today there's a lot of adversity, inhumanity and very challenging circumstances that we cannot handle or conquer. Our support systems in schools, non-profit organizations, marches/ campaigns are just not enough simply because some people are stubborn, ignorant, and scared of the judgment of others and the unknown/foreign. In some cases today, there is not a strong enough or loud enough voice to be powerful enough to make these instances stop.

How do we make it stop?

Why can't we make it stop?

I believe the two main reasons are ignorance and fear.

When are we going to stop feeding into fear and feed into bravery and boldness?

There are too many suicides and murders taking place just to sit around. People, government, and law enforcement need to stop playing superhero and cop when what we truly need to do is take action! We need to feel that those that are there to protect us are truly there to protect ALL of us. People need to stop the pettiness and stop holding grudges and believing everything on the internet. We need to make it stop in schools, communities, clubs, on social media.

When will we listen to one another and see each other for what we can bring to the world and not judge by anything but a person's character?

When will it happen?