FOX 5 has obtained the 911 call made in the harrowing moments after a pilot crashed his small plane into power lines in Gaithersburg. Miraculously, both people onboard survived the crash. FOX 5’s Lindsay Watts reports from the scene of the incident with that 911 call.

Miraculously both people on board the plane survived the crash and one was released from the hospital Monday.

Following the crash, pilot Patrick Merkle, 65, calmly explained what happened to the 911 dispatcher.

"I’ve flown into a tower to the northwest of Gaithersburg airport. It’s one of the electrical towers, and believe it or not, the aircraft is pinned in the tower," Merkle said. "I don’t know how long we’re going to be able to stay here."

Police released the 911 calls of a pilot who crashed a small plane into power lines over the weekend .

Merkle tells the dispatcher he and his passenger have head injuries from being banged around in the cockpit. The passenger, identified as 66-year-old Jan Williams, says she’s concerned her rib is cracked.

Both fear what will happen should the plane fall to the ground before they’re rescued.

"I’m really getting worried," said Williams. "The plane is definitely moving from the wind."

Merkle said dropping tail first to the ground "would not be a survivable distance." 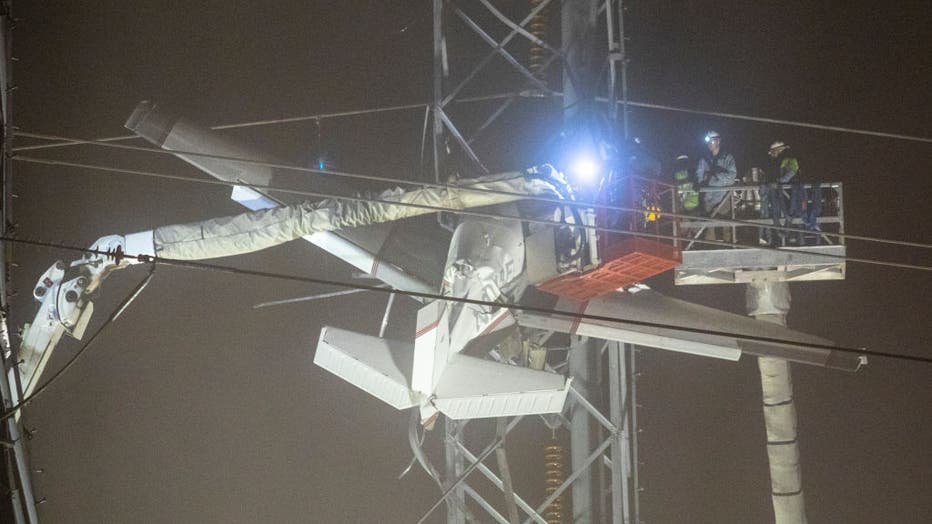 MONTGOMERY VILLAGE, MD - NOVEMBER 27: Emergency workers stabilize a plane that crashed into high-tension power line tower before they can get the people in the plane out. Montgomery Village, MD, Nov 27, 2022. (Photo by Robb Hill for The Washington Po

The dispatcher works to keep them talking with first responders already on the scene at Goshen Road near Rothbury Drive. The responding firefighters’ complicated rescue plan ultimately took seven hours.

The National Transportation Safety Board is now investigating what happened. Merkle, a D.C. lawyer, indicated he’d flown into Montgomery County Airpark before and blamed poor visibility.

"Totally a visible issue. We’re looking for the airport. I descended to the minimum altitude and then apparently got down a little bit lower than I should’ve," he said after the dispatcher asked what happened.

The airpark has long been a concern for people who live around it.

In 2014, a crash killed a mother and her two children inside a home and three people onboard the plane.

More recently, residents have raised concerns about student pilots training at the airport.

"What they tend to do are touch and go’s," said Dale Tuttle, who has been vocal about the issue in the past.

Many people living near Airpark in Montgomery County are hoping to drown out aircraft noise with their complaints.

Tuttle says pilots who are training touch down and take off, sometimes hundreds of times a day. He says the airport is like the Wild West and noise and safety issues need to be addressed.

"What last night proved is things happen, and you can do anything you want at any time," Tuttle said. "You can fly any time, fly any type of aircraft, whenever you want."

The county recently studied the impact on the community with a June report making multiple recommendations.

"That alone was a step forward," Tuttle said.