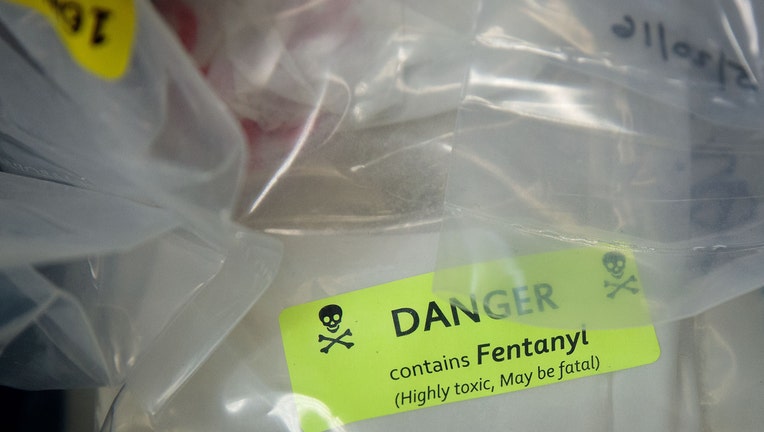 BALTIMORE (AP) -- Maryland, a state that already had one of the country's most punishing overdose mortality rates, notched a record-high number of drug deaths last year. The grim milestone was fueled by an alarming increase of fentanyl-related fatalities.

Despite renewed efforts to beat back the opioid epidemic, newly released figures from Maryland's health department show there were 2,282 intoxication deaths in 2017. Nearly 90 percent of those deaths were opioid-related, particularly the powerful, cheap synthetic forms that have been sweeping across America amid the nation's worst-ever drug crisis.

Fentanyl is the driving force behind Maryland's all-time high number of fatalities, which increased from 1,119 in 2016 to a 1,594 in 2017. That's an upsurge of some 42 percent over the span of a year. The large majority of those deaths occurred in Baltimore.

"It's terrifying that we're at a point where the numbers escalate every year. We don't even know where the peak is," said Dr. Leana Wen, Baltimore's health commissioner.

Focusing in on the state's bleak fentanyl figures, Wen said that 573 Baltimore fatalities last year involved the synthetic opioid. In comparison, there were just 12 fentanyl-related deaths in 2013.

"That's a 5,000 percent increase in four years," Wen said Friday following a round-table discussion in Baltimore with U.S. lawmakers, community representatives and others to hash over the challenges fighting the epidemic and the need for more resources to expand treatment.

The escalation in fentanyl fatalities comes as the hard-hit state is actually starting to see evidence of a dip in fatal heroin overdoses.

"While Maryland is starting to see a decline in heroin-related deaths, fentanyl-related deaths continue to rise in staggering numbers," Maryland Department of Health Secretary Robert Neall said in a statement.

Across the country, overdose tolls have been greatly aggravated by fentanyl, a synthetic opioid up to 50 times more powerful than heroin. The painkiller is often prescribed for advanced cancer patients, but it's also illegally manufactured in clandestine labs.

It's often combined with heroin but can be used alone. Dealers only need to mix a small amount of synthetics like fentanyl or carfentanil into a batch of heroin in order to stretch their supply and further imperil addicts.

The opioid epidemic shows no sign of slowing down. Preliminary figures from the first three months of 2018 indicate that there were 653 unintentional drug deaths in Maryland. These were dominated by 579 opioid-related deaths, 500 of which involved fentanyl, according to state statistics.

Wen said frontline workers in Baltimore are doing the best they can but her agency needs far more support to battle the epidemic in Baltimore, which accounts for a third of all overdose deaths in Maryland. She's been calling for the Trump administration to invoke government authority to slash prices of a life-saving overdose drug or provide funding to expand access.