ANNAPOLIS, Md. - Maryland Gov. Larry Hogan, in a Sunday interview with Fox News, walked back his earlier criticism over insufficient coronavirus testing from the Trump administration, and praised the administration's efforts to provide states with adequate medical supplies during the pandemic,

"I can tell you, I chair the nation's governors and the administration's doing a great job of communicating with all of us, and I think they've been stepping up and doing a much better job," Hogan, a Republican, told Fox News' Bret Baier and Martha MacCallum. 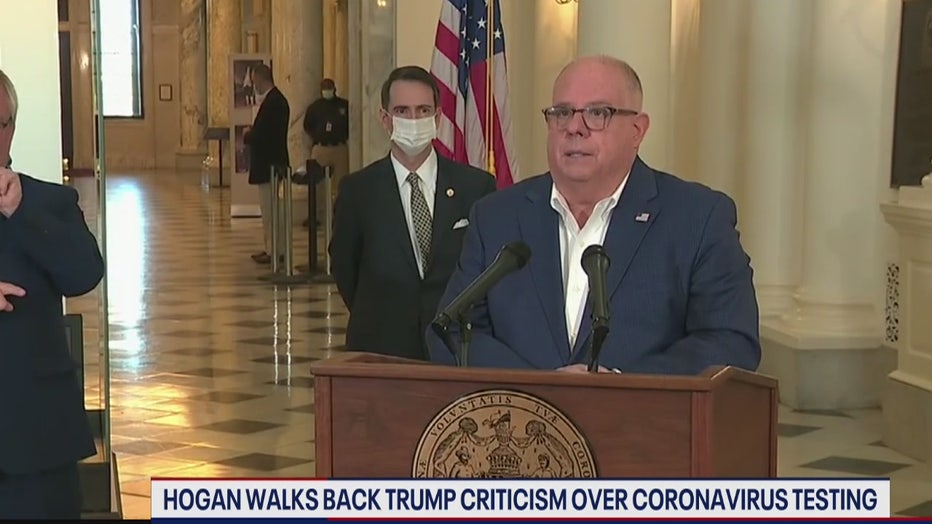 "We are all starting to get much more supplies with respect to PPEs [personal protective equipment] and I think everybody is seeing quite a bit of an effort. We've got a lot of help from the federal government here in our state, from FEMA [the Federal Emergency Management Agency] just in the past few days... and we're very grateful for that."

Hogan made the comment during Fox News' "America Together: Returning to Work" virtual town hall, moments ahead of the president's arrival.

Last month, Hogan called the president's claims that testing capacity for the contagion was at sufficient levels to reopen parts of the country "absolutely false," and called out Trump for encouraging some people to protest against their states' lockdown orders.

Since then, the federal government "has done a good job stepping up," Hogan said.

"I don't think there's any governor in America that would say we have everything that we need with respect to testing. We've all been fighting and clawing to try to find all of these different components. I think the federal government has done a good job stepping up, I think they're trying to ramp up production."

Hogan and his wife, Yumi – a Korean immigrant who speaks fluent Korean – took action following the president's message last month that state and local governments needed to step up their efforts to secure medical supplies. The two were able to negotiate with suppliers in South Korea and obtained 500,000 test kits for their state.

"The president said about a week or so ago that states were on their own and testing was a local thing and they should do that themselves, and really, basically, that's what we did," Hogan said. "We got half a million tests from Korea, bought tests from different labs across the United States. But, the federal government has been stepping up recently and FEMA has been getting us other supplies, have been very helpful, and we thank the president and his team for that help."

Protests broke out in Maryland over the weekend with some people calling on Hogan to lift the state's stay-at-home order. Hogan said that while he was sympathetic, the number of confirmed cases has continued to rise -- indicating that the state has not yet reached its peak.

"I sympathize with them... I'm a lifelong small business owner. I understand how difficult it is," he said. "I have a reopening plan that follows the president's guidelines... We're hoping to get our numbers to plateau so we can get things open as quickly as possible because we have too many people not working and too many businesses that are suffering."

Maryland, as of Sunday, recorded over 25,400 confirmed coronavirus cases, with over 1,100 deaths, according to the state health department. Over 1,600 people remained hospitalized in the state Sunday with severe cases of COVID-19.