Marcus Jones is no longer acting police chief of Montgomery County. He was officially sworn in as the permanent chief Friday.

Jones, 55, who entered the high school's performing arts center to a standing ovation, was hailed as a respected leader who is also a 34-year-veteran of the Montgomery County Police Department.

"Honored" and having "mixed emotions," is how Jones described his thoughts heading into the ceremony.

The long-time career law enforcement member was not County Executive Marc Elrich's first pick for the role. Two other finalists reportedly dropped out.

Jones, a county law enforcement member and leader for three decades, still held support from police members and those on the county council, leading the council to celebrating Jones and unanimously approve his nomination on Tuesday.

Jones officially takes on the new role during a time and week of controversy for the department.

Since last Friday, two different sides have been battling over a police "thin blue line flag" gifted to the department, but then prohibited from being displayed.

Elrich defended his decision to pull the flag, describing how some view the "thin blue line" flag as a racist symbol because of its appropriation by the "Blue Lives Matter" movement.

Before the swearing-in ceremony began, Jones spoke to FOX 5 about a greater need for understanding on both sides.

I think there's two separate issues with the flag particularly with the flag," said Jones. "You have officers who, you know, we understand what the 'thin blue line' really means and with that flag and how Blue Lives Matter hijacked that flag and utilized it for their own purpose. But they have to understand those folks who know what that flag symbolizes. But we want to make sure that our officers are not forgotten out of that discussion." 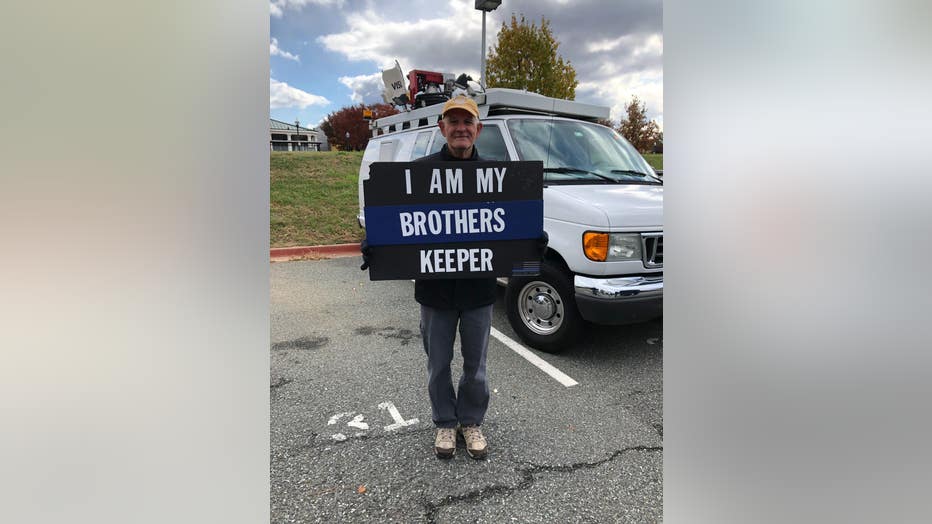 Just hours before his swearing-in, several dozen officers and supporters gathered outside of Germantown's 5th District Police Station to demonstrate, proudly displaying the police flag. More than 75 smaller versions of the "thin blue line flag" were also handed out to law enforcement members and their families. The group, Brothers Before Others, organized the demonstration.

"We didn't come down here to protest," said Brothers Before Others Spokesperson Rob O'Donnell. "We could have easily gone down to the county executive's office and posted him, and did this in front right in his face. Quite frankly, he's not worth our time. You know, we came here to support the men and women who were slighted directly."

Up until this event, many of those police officers who voiced feeling slighted did not want to do so in front of news cameras. But on Friday, some of those officers decided to speak out.

"A little disheartened," said a woman who identified herself as "Kim" and a member of the county's 6th District. "You know, we're out here risking our lives day in and day out, and it would be nice to have the support of the upper echelon."

Others told FOX 5 they did not feel supported by the county executive and that support from above is important to boosting moral.

In his closing remarks Friday, Jones spoke of pride, telling those in attendance: as long as he leads the department, they will not hang their heads.