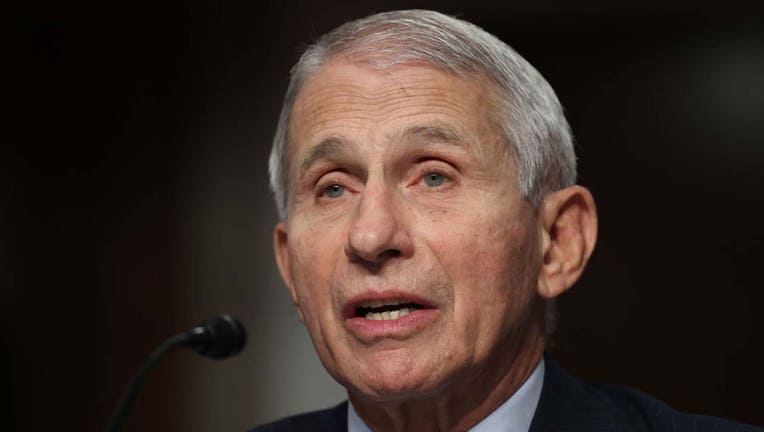 FILE - National Institute of Allergy and Infectious Diseases Director Anthony Fauci testifies before the Senate Health, Education, Labor, and Pensions Committee about the ongoing response to the COVID-19 pandemic.

GREENBELT, Md. - The man who made threats via email to Dr. Anthony Fauci, and several other health officials, was sentenced Thursday to 37 months in prison followed by three years of supervised release.

Levine, the assistant secretary for Health at the U.S. Department of Health and Human Services, as well as a Massachusetts public health official and a religious leader. Per Connally’s plea agreement,

from December 28, 2020, to July 25, 2021, the West Virginia resident used an anonymous email account from a provider of secure, encrypted email services based in Switzerland, to send a series of emails to Fauci threatening to harm and/or kill him and members of his family.

One of the emails threatened that Dr. Fauci and his family would be "dragged into the street, beaten to death, and set on fire."

On April 24, 2021, court docs show Connally sent seven threatening emails. That day, he sent Dr. Collins a series of four emails threatening him and his family with physical assault and death if Dr. Collins did not stop speaking about the need for "mandatory" COVID-19 vaccinations.

Connally admitted that he sent the threats to Fauci and Collins to intimidate them and interfere with their official duties and to retaliate against them for discussing COVID-19, testing and prevention.

During the investigation, officials confirmed that the anonymous encrypted email account Connally used was his.

The sentence was announced Thursday by U.S. Attorney for the District of Maryland Erek L. Barron and Deputy Inspector General for Investigations Christian J. Schrank, Office of Inspector General of the U.S. Department of Health and Human Services.

RELATED: Maryland man said Fauci would be ‘dragged into the street, beaten to death, and set on fire’: Feds

"Everyone has the right to disagree, but you do not have the right to threaten a federal official’s life," Barron said in a statement. "Threats like these will be prosecuted to the fullest extent of the law."

"Today’s sentencing shows that individuals threatening violence against federal officials and others will be held accountable for their crimes," said Deputy Inspector General for Investigations Christian J. Schrank of the U.S. Department of Health and Human Services Office of Inspector General. "The public, including public servants, deserve the utmost safety and the assurance that they can perform their duties without interference. Our agency, working closely with our law enforcement partners, will continue to bring those who threaten violence to justice."