A 72-year-old British man’s&nbsp;dentures&nbsp;were found lodged in his throat eight days after he had surgery, leading to complications and forcing him to later undergo an emergency procedure.

United Kingdom - A 72-year-old British man’s dentures were found lodged in his throat eight days after he had surgery, leading to complications and forcing him to later undergo an emergency procedure.

The man, a retired electrician, underwent a “minor operation” to remove a benign lump in his stomach when his dentures — a metal roof plate with three false teeth — dislodged, SWNS reported, citing BMJ Case Reports. The report did not detail where the surgery took place.

About six days after the procedure, the retiree complained he could not swallow solid food. He also noticed blood in his mouth. Doctors ordered a chest X-ray, diagnosed him with pneumonia, and prescribed him steroids and antibiotics.

But he didn’t improve and was admitted to the hospital just two days later. Medics told doctors they “spotted a semi-circular object lying across his vocal cords,” according to SWNS.

The man reportedly thought his dentures were lost while he was in the hospital to remove the lump. 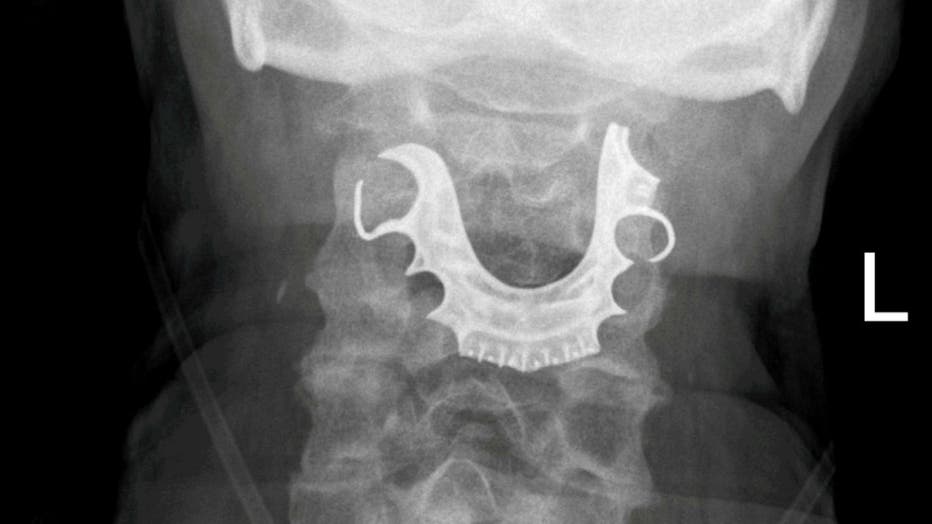 An X-ray of a patient who was left with his dentures in his throat after surgery.  (Photo by SWNS)

He then underwent emergency surgery to remove the dentures from his throat. He spent six days in the hospital before he was released — only to return again due to excessive blood loss.

The man reportedly required several blood transfusions due to a tear in one of his arteries. Roughly a week later the man was on the mend.

The report’s authors urged other medical professionals to be wary if a person wears dentures before they undergo general anesthesia.

"The presence of any false teeth or dental plates should be clearly documented before and after any surgical procedure, with all members of the surgical team made aware of what is to be done with them,” they wrote, according to SWNS.