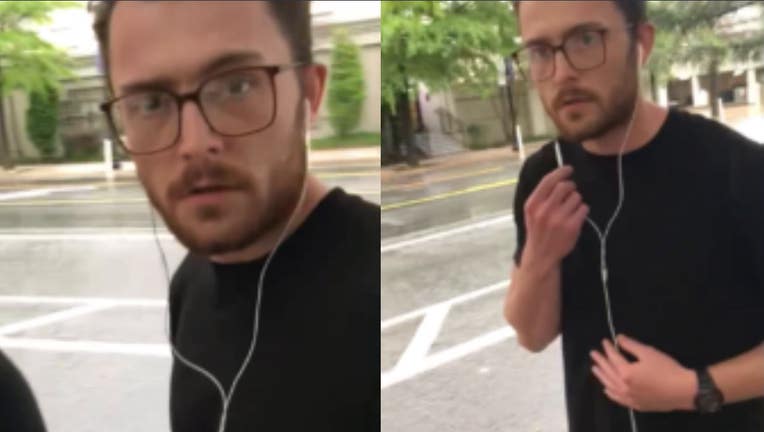 ARLINGTON, Va. - Police in Arlington County are on the lookout for a man accused of assaulting an Asian restaurant employee while hurling racial slurs after skipping out on a tab.

The incident is being investigated as a hate crime.

Two restaurant employees say the man bought $70 worth of sushi rolls at Bonsai Grill in Crystal City, then left the restaurant without paying his bill.

The search continues for a man accused of attacking an Asian worker at a restaurant in Crystal City. Police say he also yelled racial slurs during the encounter.

Two employees: a mother and son, chased after the man. The man refused to return to the restaurant, and pushed the woman to the ground after her son, Henry Kim, began recording him.

The suspect then fled on foot toward Richmond Highway.

Police say the man also used racial slurs against the two employees, who are an Asian man and an Asian woman.

"He said – "You Asians, get out of my face. I don’t want the coronavirus from you guys," Henry Kim said. "I was a little bit frustrated, but at the same time – it’s not the first this has happened to me."

The man is accused of pushing Kim’s mom to the ground.

"She’s doing a lot better. Thank, God. When she fell down, she was really hurt in the elbows and hands," said Kim.

In accordance with state law, the incident was reported to Virginia State Police as a hate crime.

The suspect is described as a 5-foot-9 to 5-foot-11 white man in his late 20s or early 30s with dark brown hair and a light brown beard. He was wearing square-rimmed glasses with a black T-shirt, black pants and black sneakers.

The assault adds to the list of surging hate crimes against Asian Americans since the start of the pandemic.

The advocacy group Stop AAPI Hate has reported 6,600 such hate incidents in the year following the start of the pandemic in the United States.