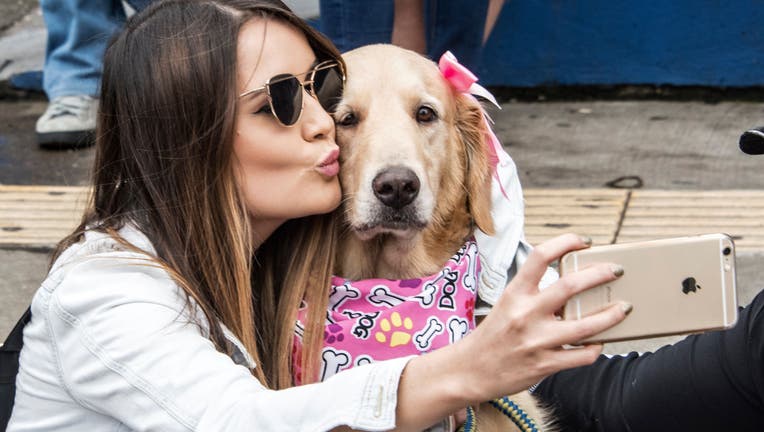 When uploading photos for a dating profile, don’t worry about being outshined by your friends — it’s your dog that people are swiping for, according to new research.

SEE IT: SINGLE MAN RECEIVES OVER 1,000 DATING APPLICATIONS AFTER RUNNING AD ON BILLBOARD

A survey of 2,000 Americans who have used a dating app (1,000 of whom own a dog) found having a cute pooch in the shot helped respondents find success matching online (63 percent).

Conducted by OnePoll on behalf of a pet food brand – called "I And Love And You" – the survey examined the correlation of dating and pets in this modern age of swiping, as well as the love Americans have for their four-legged friends.

Choosing which photos to include on a dating profile can be a make-or-break, and the survey found non-dog owners wanted to reap the benefits of a pet, too. Results revealed that 39 percent have even borrowed a friend’s dog to use in their dating profile.

But this can backfire — of the 39 percent who have matched with someone who borrowed a dog for a photo, more than half (53 percent) were “very upset” when the truth came out.

That’s not the only lie people have told on their profiles: 58 percent have come across someone who didn’t look like their profile photos, while 49 percent have encountered a match who was untruthful in the bio or description.

The survey not only looked at the elements of a successful profile, but also at relationships and how they can change when a pet is involved.

Thirty-seven percent of respondents have experienced a breakup in which a pet was involved — and 69 percent of those say they missed their pet as much as they missed their ex. Fifty-three percent worried their pet would feel abandoned, and 31 percent admit they even stayed in the relationship longer than they should have, because they didn’t want to leave the pet.

“We believe pets are people too, so not only can a breakup be heartbreaking with your human partner, it can sometimes be even harder knowing you won’t see your furry companion every day,” said Lindsey Rabaut, VP of marketing at I And Love And You. “We want the best for them, even more so after a breakup.”

Considering the love people have for their four-legged friends, it’s perhaps not surprising that 60 percent of respondents would prefer to spend Valentine’s Day with a pet instead of a partner. Also, of the dog owners surveyed, 83 percent admit to craving extra love from their furry friend around Valentine’s Day. (Respondents are eschewing the traditional romantic dinner, anyway — 73 percent would rather stay home and have a night in.)

"They deserve all the love and attention in the world on Valentine’s Day — and every day,” Rabaut added.