LOS ANGELES - Three medical workers are fighting for their lives after being stabbed inside a hospital in the Encino neighborhood of Los Angeles Friday evening.

The Los Angeles Police Department responded to a call a little after 3:45 p.m. at the Encino Hospital Medical Center on Ventura Boulevard. According to the Los Angeles Fire Department, the three people, all hospital workers, were taken to a local trauma center and are in critical condition.

The hospital was on lockdown before medical workers and patients were asked to safely evacuate as LAPD worked to get the suspect, 35-year-old Ashkan Amirsoleymani, to turn himself in. Amirsoleymani barricaded himself inside a hospital room for more than four hours.

It is unknown if the suspect and the stabbing victims knew each other.

A little after 8 p.m., an ambulance with police following the vehicle was spotted transporting a man from the Encino Hospital Medical Center to another hospital. LAPD later confirmed it was the stabbing suspect who was being taken to the hospital and that he will be in police custody.

Amirsoleymani was taken into custody after an hours-long standoff. He is facing three counts of attempted murder and is being held on $3 million bail. 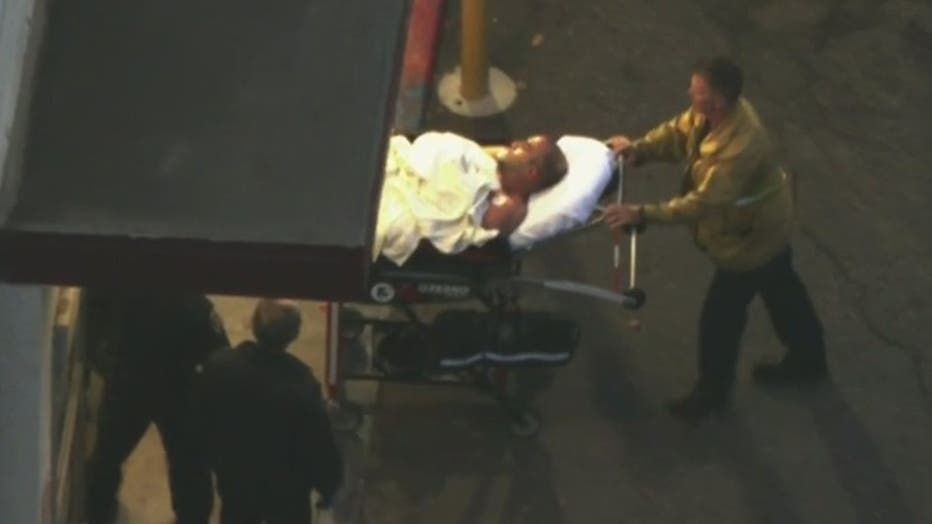 SkyFOX was over a different hospital when the suspect was being taken there after an hours-long standoff with police.

The hospital is on lockdown as there is a standoff between law enforcement officers and the stabbing suspect.

WHAT WE KNOW ABOUT THE VICTIMS

The hospital identified the three victims as an ED physician and two staff nurses. Below is a statement issued, in part, by the hospital:

"Three injured at Encino Hospital were two staff nurses and an ED physician who were all taken to the nearest trauma center. The hospital is currently on lockdown. We are continuing to monitor the situation and our thoughts and prayers are with all involved."

Dignity Health Northridge Hospital Medical Center, the facility that took in the three stabbing victims, said in a statement that all three are in stable condition.

Below is a statement issued, in part, by the Northridge hospital:

"Dignity Health Northridge Hospital Medical Center received three patients to our Level II Trauma Center suffering stab wounds from the incident at Encino Hospital Medical Center. All three patients are currently listed in stable condition.Due to federal privacy laws, we are unable to provide any additional patient information. We will now defer all questions to the Los Angeles Police Department."

WHAT WE KNOW ABOUT THE SUSPECT

During a press conference held a little after 6:30 p.m., LAPD said Amirsoleymani had a criminal history prior to Friday's incident. Some of the suspect's record includes resisting arrest and battery on an officer, LAPD said. Police said during the press conference that the suspect has a "lengthy" history with officers across Los Angeles and the San Fernando Valley.

LAPD said it made outreach efforts to Amirsoleymani's family in hopes of getting him to turn himself in. The standoff lasted several hours before he was taken into custody.

Police say the suspect walked into the hospital and was attempting to seek treatment.

The hospital has security in the building, but LAPD said it is unsure if the personnel there were armed at the time of the stabbing incident.

The attack comes days after a Tulsa, Oklahoma, hospital was under attack by a gunman. The attack at the St. Francis Health System – Natalie Building ended with four people dead, including the suspect's surgeon.

Prior to the Tulsa hospital shooting, the U.S. saw other mass shootings, including an attack that killed 19 children and two teachers at an elementary school in Uvalde, Texas and a shooting at a supermarket in Buffalo, New York. 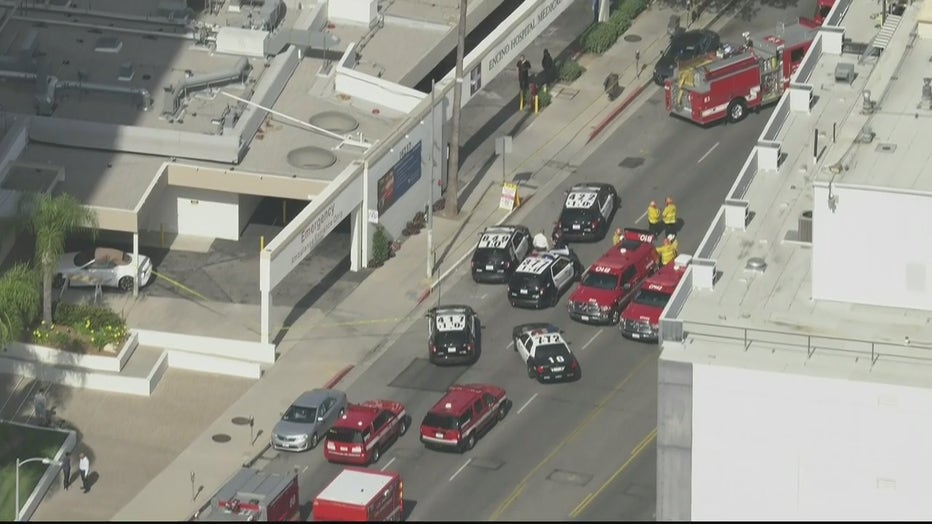