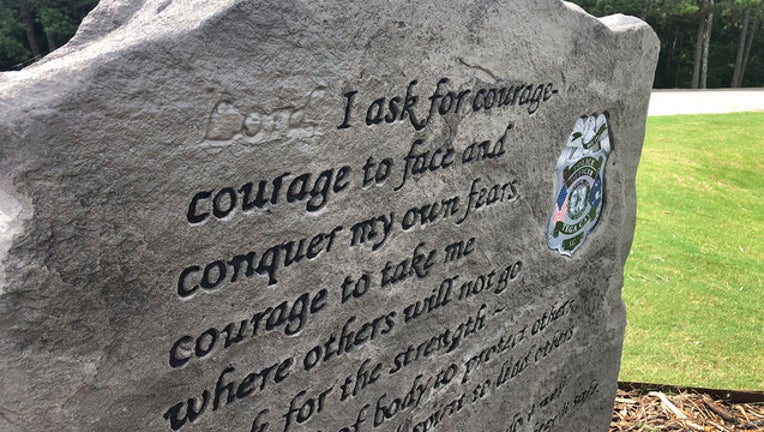 City leaders in Tega Cay, SC say they were forced to cover up the word "Lord" on a donated memorial honoring fallen officers after multiple complaints. (FOX 46 Charlotte)

TEGA CAY, S.C. - A memorial honoring fallen officers outside the new police station in Tega Cay is receiving a lot of attention. The memorial features a large stone which is engraved on the back with a scripture. The scripture on the stone was recently edited, leaving out the word “Lord”.

“These people you know they put their lives on the line every day for the safety of the community and that’s what we hope people get out of it,” said Tega Cay City Manager Charlie Funderburk.

The memorial has been outside the new police department for two weeks but was edited just last week.

“Yeah I thought someone who was upset about it just crossed it off,” said resident, Lauren Albano.

People were upset, but they weren’t ones who filled in the word “Lord”, which appears 3 different times. Instead, it was Tega Cay city leaders.

“A little surprised, but as the complaints came in the end result was pretty clear,” said Funderburk.

Funderburk says complaints came in to city hall almost immediately after the memorial went up. Following meetings with the city attorney, they decided to get rid of the word.

With the recent changes, city hall is receiving complaints again.

“I mean it was a beautiful monument with a beautiful little prayer on it. I would have left it as is,” said one resident.

“There is just as many people upset now that it got removed over people upset it was there in the first place. There is no win here at all,” said Funderbirk.

Funderburk tells FOX 46 Charlotte the scripture on the back is the same seen on fallen officer memorials throughout the country, including in Washington DC. He says since the monument in Tega Cay is new and has no historical significance, the city decided to make the change.