During the event, most locations will see up to 97% of the moon slip into Earth’s shadow. Dr. Noah Petro, a lunar reconnaissance orbiter project scientist, discussed the celestial event. (Credit: NASA)

Los Angeles - Skygazers will soon be able to witness a rare partial lunar eclipse — one of most awe-inspiring celestial events of the year.

During the event, most locations will see up to 97% of the moon slip into Earth’s shadow. The moon may even take on a reddish hue.

"Imagine all of the sunrises and sunsets from the Earth are projected onto the lunar surface. That’s why it takes on that beautiful sunset, sunrise glow," Dr. Noah Petro, a lunar reconnaissance orbiter project scientist, told FOX Television Stations. "This is an event that doesn’t happen all that often, and if you’re outside to enjoy it, take a moment to take a picture with the red moon."

According to EarthSky, which offers night sky and science news, the last partial lunar eclipse that stretched longer happened on February 18, 1440 — 581 years ago. 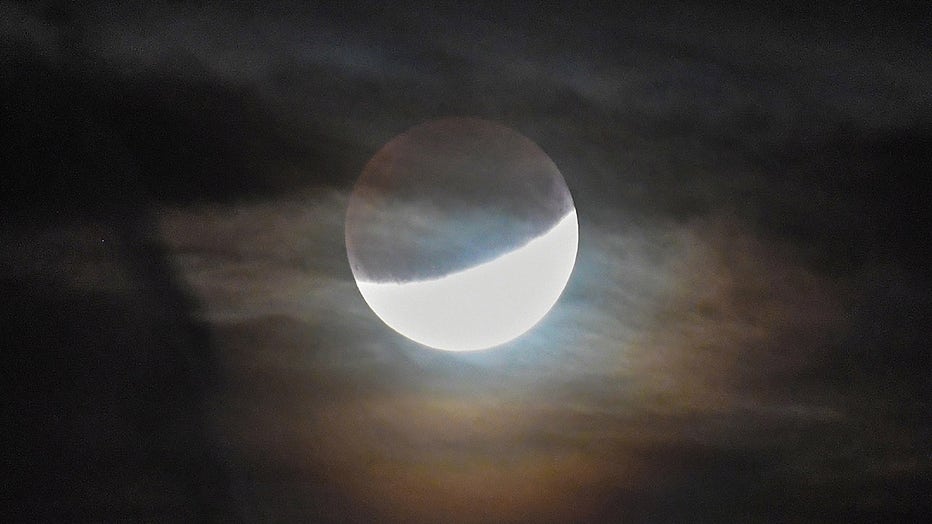 The moon is seen during a partial lunar eclipse in Lavau-sur-Loire, western France, on July 16, 2019. (Photo by LOIC VENANCE / AFP) (Photo credit should read LOIC VENANCE/AFP via Getty Image

Meanwhile, November’s partial lunar eclipse, which is the second partial eclipse of 2021, will be the longest such event within a stretch of 1,000 years.

The next time Earth will see a partial lunar eclipse as long will be on February 8, 2669.

"This is about as close to a total eclipse without being a total eclipse as you can get," Petro continued. "It just grazes that edge, so definitely something not to miss."

When, where to see partial lunar eclipse

This means the partial eclipse phase will last a whopping 3 hours, 28 minutes and 24 seconds, and the overall duration — from the moment the moon enters Earth’s penumbral shadow, to the moment it leaves — will be around six hours.

RELATED: Leonid meteor shower 2021: When it will peak, where to best see it

For East Coast viewers, the partial eclipse will reach its maximum at 4 a.m. For observers on the West Coast, that translates to beginning just after 11 p.m., with a maximum at 1 a.m.

"Partial lunar eclipses might not be quite as spectacular as total lunar eclipses – where the Moon is completely covered in Earth's shadow – but they occur more frequently," NASA wrote of the upcoming event. "And that just means more opportunities to witness little changes in our solar system that sometimes occur right before our eyes."

You can visit timeanddate.com

to get the exact timing of the eclipse from your location.

How to watch the partial lunar eclipse

Unlike a solar eclipse, a lunar eclipse requires no special equipment to view, so this event is safe to watch with your own eyes. But feel free to grab a pair of binoculars or a telescope if you want a closer view at the dazzling phenomenon.

While the moon is bright and easy to spot, the best viewing opportunities will be in areas with less light pollution and unobstructed views.

Also, make sure to allow your eyes to adjust to the dark setting, as this can take about 20 to 30 minutes.

Lastly, keep in mind, temperatures at night in late November can be chilly in the U.S., so make sure to dress warmly for the event.

Stay tuned for a total solar eclipse in December

More celestial events will light up the sky before 2021 is up.

Just two weeks after November’s partial lunar eclipse will be a solar eclipse on Dec. 4.

The "ring of fire" is a type of solar eclipse where the moon partially blocks the sun's light on Earth.

Even though it’s considered one of the biggest celestial events of the year, few people will see it, unfortunately; as the eclipse's path of totality falls on a narrow strip in Antarctica.

People in the southern tips of Australia, New Zealand, Africa, and South America will also be able to step outside on Dec. 4 to see the spectacle above their heads.

"The next major date I have circled on my calendar is April of 2024 when the next solar eclipse occurs when the path of that eclipse will criss cross the country — very similar to what we experienced a few years ago," Petro shared. "But this one will pass more North-South through the country. I’m looking forward to that, to find a spot in the path of totality, and for a few moments stand in the shadow of the moon here on the Earth’s surface."

The Leonid meteor shower occurs each year in November and peaks toward the middle of the month. The Leonids are bright meteors, can also be colorful, and are considered to be some of the fastest meteors out there, according to NASA.

The shower will peak early in the morning on Nov. 17, according to EarthSky.

Footage posted all over social media captured a meteor flashing across the sky.

Leonids are also known for their fireballs, which are larger explosions of light and color that can persist longer than an average meteor streak, as well as "earthgrazers," which are meteors that streak close to the horizon and are known for their long and colorful tails, NASA says.

Skywatchers can expect to see anywhere from 10 to 15 meteors an hour at the peak of the Leonid meteor shower, according to EarthSky.

This story was reported from Los Angeles. Kelly Hayes contributed.