Video recorded by Isabella Sloan shows a colossal wave smashing over the rooftops of two-story condos at the Keauhou-Kona Surf and Racquet Club.

KEAUHOU-KONA, Hawaii - A massive wave sparked from hurricane remnants crashed into -- and over a two-story condo building in Hawaii as parts of the Big Island dealt with heavy surf over the weekend.

Oceanfront buildings along Keauhou-Kona took the brunt of "historic" surf conditions Saturday. Swells were forecast to reach as high as 20 feet along the southern coast of Hawaii Island.

"These intense waves are all because of the remnants of what was once Hurricane Darby," says FOX Weather Meteorologist Jane Minar.

"It's flooding everywhere," says a voice in footage of the waves, taken by Isabella Sloan. 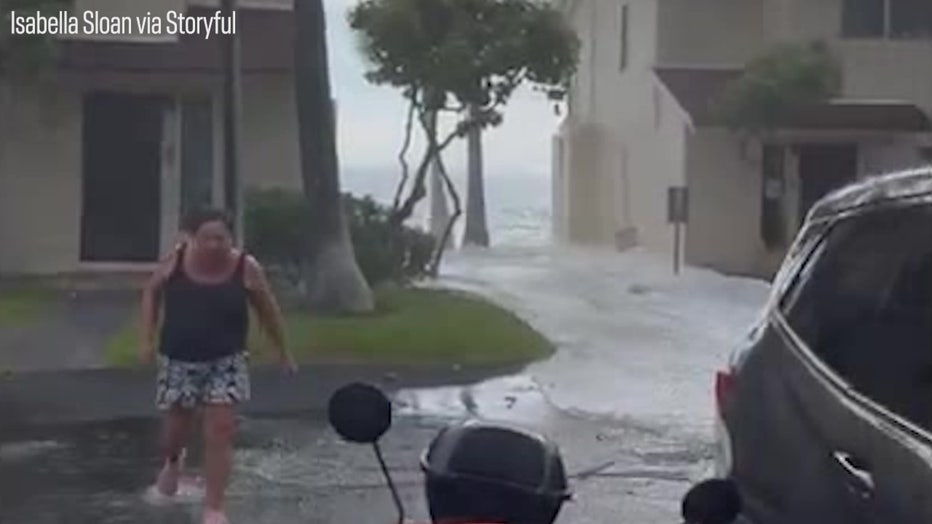 Water soaks the parking lot, along with bystanders, as waves crash in. (Isabella Sloan via Storyful)

Darby had at one point reached major hurricane status with peak winds of 140 mph – rating a Category 4 on the Saffir-Simpson Scale – while still hundreds of miles east of Hawaii. But Darby fizzled as it tracked a few hundred miles south of the Big Island. Still, the once-powerful storms churned heavy surf that eventually made its way to the Big Island.

While the larger swells had abated over the weekend, hazardous surf conditions were expected to linger into Monday.

LINK: Get more on this story from FOXweather.com