Vice President-elect Kamala Harris is the latest public figure to be inoculated against COVID-19.

She received their first round of the COVID-19 vaccine Tuesday. Her vaccination took place on camera as part of a growing effort to encourage the public to trust the vaccines.

Even before the U.S. Food and Drug Administration authorized Pfizer and Moderna’s vaccines for emergency use this month, a sense of mistrust fell over the public.

New vaccines have traditionally taken close to a decade to bring to market. Yet, the pandemic led pharmaceutical companies to develop vaccine candidates in less than a year, which created concerns that the products had been rushed and not thoroughly tested. 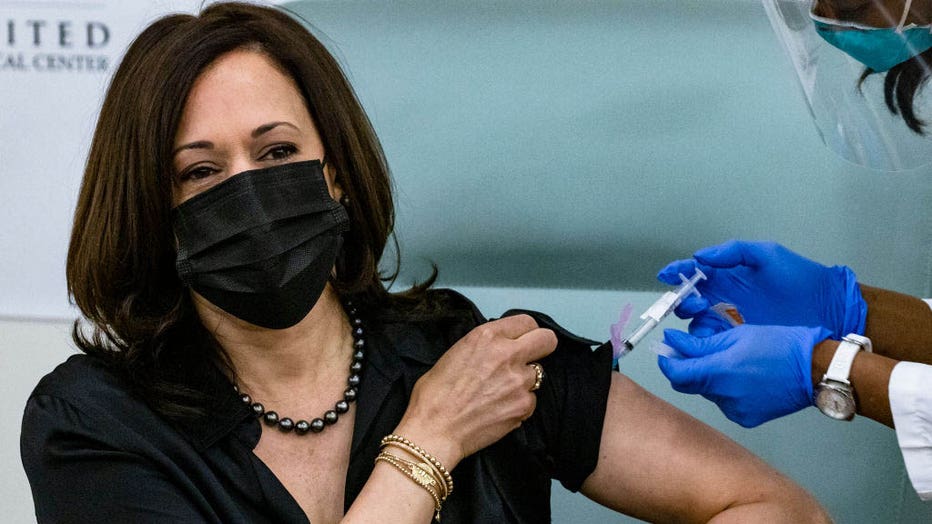 President-elect Joe Biden received a dose of Pfizer’s vaccine last week at a hospital not far from his Delaware home. His injection was scheduled a week ahead of Harris’ to prevent them from developing any potential side effects at the same time.

Dr. Anthony Fauci received the first dose of the Moderna COVID-19 vaccine on Dec. 22, stating he hopes it serves as a symbol to Americans about the shot's safety and efficacy.

President Donald Trump has not said when he intends to get the vaccine. He tweeted earlier this month that he was "not scheduled" to take it, but said he looked "forward to doing so at the appropriate time."

The White House has said he is still discussing timing with his doctors.

"When the time is right, I’m sure he will remain willing to take it," White House spokesperson Brian Morgenstern echoed Friday. "It’s just something we’re working through."

White House press secretary Kayleigh McEnany, however, offered a different explanation for the delay. She told reporters last week that Trump was holding off, in part, "to show Americans that our priority are the most vulnerable."

"The president wants to send a parallel message, which is, you know, our long-term care facility residents and our frontline workers are paramount in importance, and he wants to set an example in that regard," she said.

This story was reported from Atlanta. Kelly Hayes contributed.