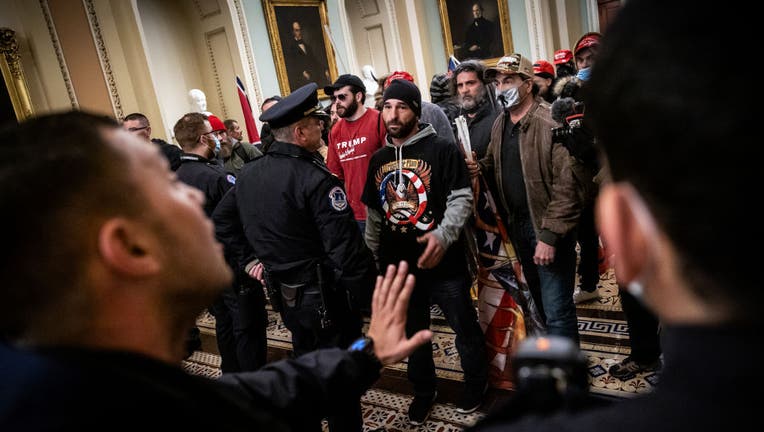 Doug Jensen, seen center, is shown with a group of rioters inside the Capitol speaking with U.S. Capitol Police officers on Jan. 6, 2021 (Photo by Win McNamee/Getty Images)

WASHINGTON - An Iowa man was convicted Friday of charges that he led a crowd of rioters in chasing a U.S. Capitol police officer up a staircase and accosting other officers guarding the Senate, one of the most harrowing scenes of the mob’s attack that day.

A federal jury deliberated for roughly four hours before convicting Douglas Jensen of felony charges that he obstructed Congress from certifying the Electoral College vote on Jan. 6, 2021, and that he assaulted or interfered with police officers during the siege.

Jensen was convicted on all counts, including a charge that he engaged in disorderly conduct inside the Capitol while carrying a folding knife in his pocket.

During the trial’s closing arguments, a prosecutor accused Jensen of "weaponizing" rioters by taking the lead in chasing Capitol Police Officer Eugene Goodman up a staircase. A reporter’s video of the confrontation went viral.

"The defendant wasn’t just leading the mob. He was weaponizing it," Assistant U.S. Attorney Hava Mirell told jurors. "He knew he had the numbers, and he was willing to use them."

Jensen, a construction worker from Des Moines, Iowa, was wearing a T-shirt with a large "Q" expressing his adherence to the QAnon conspiracy theory. One of the most memorable images from the Jan. 6 attack captured Jensen with his arms extended as he confronted a line of police officers near the Senate chambers. 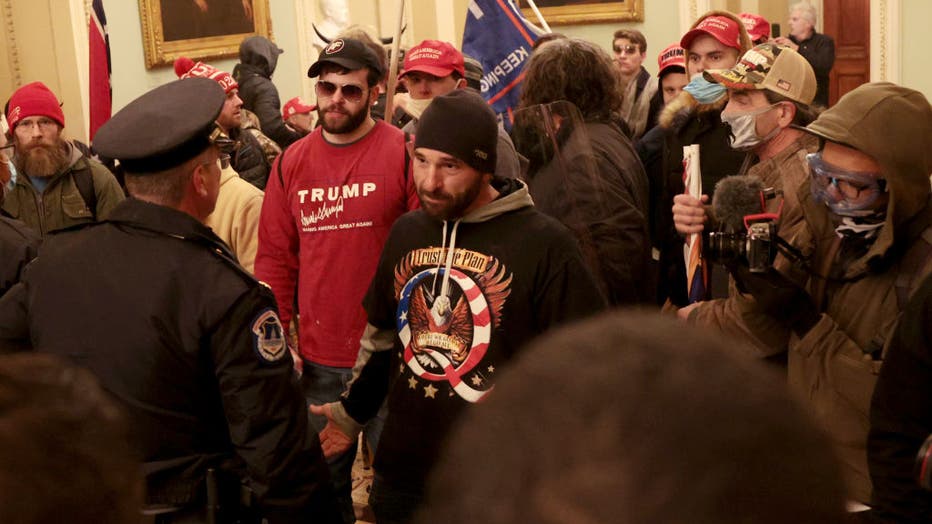 Doug Jensen, seen center, is shown with a group of rioters inside the Capitol speaking with U.S. Capitol Police officers on Jan. 6, 2021 (Photo by Win McNamee/Getty Images)

"Go arrest the vice president," Jensen told one of the officers, according to prosecutors.

QAnon has centered on the baseless belief that former President Donald Trump was secretly fighting a Satan-worshipping cabal of "deep state" enemies, prominent Democrats and Hollywood elites. Jensen believed the conspiracy theory’s apocalyptic prophesy that "The Storm" was coming and would usher in mass arrests and executions of Trump’s foes, including Vice President Mike Pence.

Pence was presiding over the Senate on Jan. 6 as a joint session of Congress was convened to certify President Joe Biden’s 2020 electoral victory. Before the riot, Trump and his allies spread the falsehood that Pence somehow could have overturned the election results.

After scaling the outer walls of the Capitol, Jensen climbed through a broken window to enter the building. Prosecutors said Jensen learned from a friend’s text message that Pence was about to certify the election results.

"That’s all about to change," Jensen replied.

Jensen didn’t testify at his trial, which started Tuesday. Goodman was a key witness for prosecutors.

Before running upstairs, Goodman approached Jensen and other rioters with his hand on his gun. Fearing for his life, Goodman retreated upstairs and found backup from other officers guarding an entrance to the Senate, where senators were being evacuated, according to prosecutors.

At least 880 people have been charged with Capitol riot-related federal crimes. About 400 of them have pleaded guilty. Juries have convicted eight Capitol riot defendants after trials. None of the defendants who had jury trials was acquitted of any charges.

Sentences for the rioters have ranged from probation for low-level misdemeanor offenses to 10 years in prison for a man who used a metal flagpole to assault an officer.