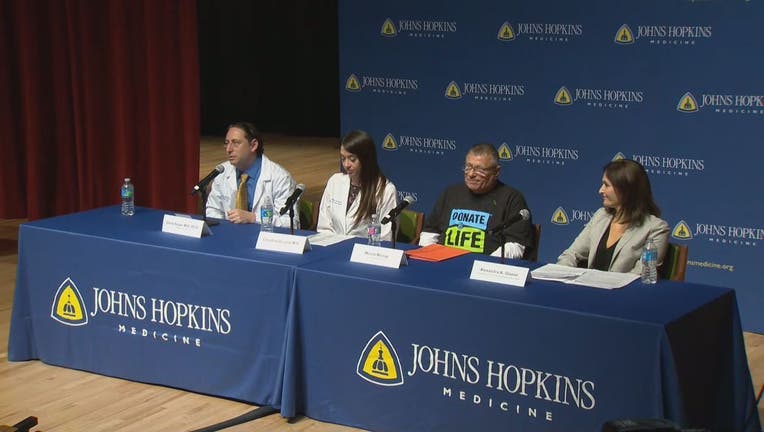 WASHINGTON (AP) -- Surgeons in Baltimore for the first time have transplanted organs between an HIV-positive donor and HIV-positive recipients, a long-awaited new option for patients with the AIDS virus whose kidneys or livers also are failing.

Johns Hopkins University announced Wednesday that both recipients are recovering well after one received a kidney and the other a liver from a deceased donor -- organs that ordinarily would have been thrown away because of the HIV infection.

Doctors in South Africa have reported successfully transplanting HIV-positive kidneys but Hopkins said the HIV-positive liver transplant is the first worldwide. Hopkins didn't identify its patients, but said the kidney recipient is recuperating at home and the liver recipient is expected to be discharged soon.

"This could mean a new chance at life," said Dr. Dorry Segev, a Hopkins transplant specialist who pushed for legislation lifting a 25-year U.S. ban on the approach and estimates that hundreds of HIV-positive patients may benefit.

For patients who don't already have the AIDS virus, nothing changes -- they wouldn't be offered HIV-positive organs.

Instead, the surgeries, performed earlier this month, are part of research to determine if HIV-to-HIV transplants really help.

The reason: Modern anti-AIDS medications have turned HIV from a quick killer into a chronic disease -- meaning patients may live long enough to suffer organ failure, either because of the HIV or for some other reason. In the U.S., HIV-positive patients already are eligible to receive transplants from HIV-negative donors just like anyone else on the waiting list.

That list is long -- for kidneys, more than 100,000 people are in line -- and thousands die waiting each year. There's no count of how many of those waiting have HIV, but Segev said it increases the risk of death while waiting.

If the new approach works, one hope is that it could free up space on the waiting list as HIV-positive patients take advantage of organs available only to them. Segev estimated that 300 to 500 would-be donors who are HIV-positive die each year, potentially enough kidneys and livers for 1,000 additional transplants.

"It increases the pool of potential organ donors and allows more people to be transplanted. That's the advantage of this whole thing, but it is a research project so we are going to monitor it very carefully," said Dr. David Klassen of the United Network for Organ Sharing, which oversees the nation's transplant system.

Hopkins is the first hospital given permission for HIV-to-HIV transplant research. Two others -- Hahnemann University Hospital in Philadelphia and Mount Sinai Medical Center in New York -- also are approved for studies, according to the UNOS.

Segev helped spur a 2013 law -- the HIV Organ Policy Equity, or HOPE, Act -- that lifted a federal ban on any use of HIV-infected organs and paved the way for that research.

UNOS says at least 1,376 people with HIV have undergone transplants using HIV-negative organs since 2005. Special expertise is required to coordinate both the anti-HIV medications and anti-rejection drugs those patients require, but large studies have shown that HIV patients fare well after transplant.

Using an HIV-positive organ adds an extra concern: Transplant recipients are exposed to a second strain of the virus from the donor, explained Dr. Christine Durand, a Hopkins infectious disease specialist. Doctors have to consider what anti-AIDS medications the donor took to avoid introducing HIV drug resistance.

Hopkins' first HIV-to-HIV transplants were possible thanks to a deceased donor. The New England Organ Bank, which arranged for that donation, issued a statement from the unidentified woman's family expressing gratitude that someone who fought HIV's stigma was able to donate and help others.

But Segev said his team also is exploring how to safely attempt kidney transplants using living donors who have HIV.

And advocates said it's time for more people to ask about becoming organ donors.

"If you have considered donation but think that no one would want your organs, let the doctors decide that," said Morris Murray, an HIV-positive Maryland man who waited years before receiving an HIV-negative liver transplant in 2013.