Soccer fans at the Khalifa International Stadium in Doha, Qatar, could be heard whistling during the Iranian national anthem while Iranian players stood silent. Credit: Vinicius Guedes via Storyful

As the World Cup is drawing cultures and countries together from around the world, one continues to be divided.

Iran is competing in the World Cup as a major women's protest movement is roiling the country — and the question whether to root for the country's national team has divided Iranians, entangling the team in the country's combustible politics.

Many view support for the Iranian team as a betrayal of the young women and men who have risked their lives in the streets, while others insist the team, which includes players who have spoken out on social media in solidarity with the protests, is representative of the country's people and not its ruling Shiite clerics.

The unrest was spurred by the Sept. 16 death of 22-year-old Mahsa Amini in the custody of the country’s morality police. It first focused on the state-mandated hijab, or headscarf, for women, but has since morphed into one of the most serious threats to the Islamic Republic since the chaotic years following its founding.

Observers note that the players are likely facing government pressure not to side with the protests, but on Monday, Iran's players didn't sing along to their national anthem before the match against England. 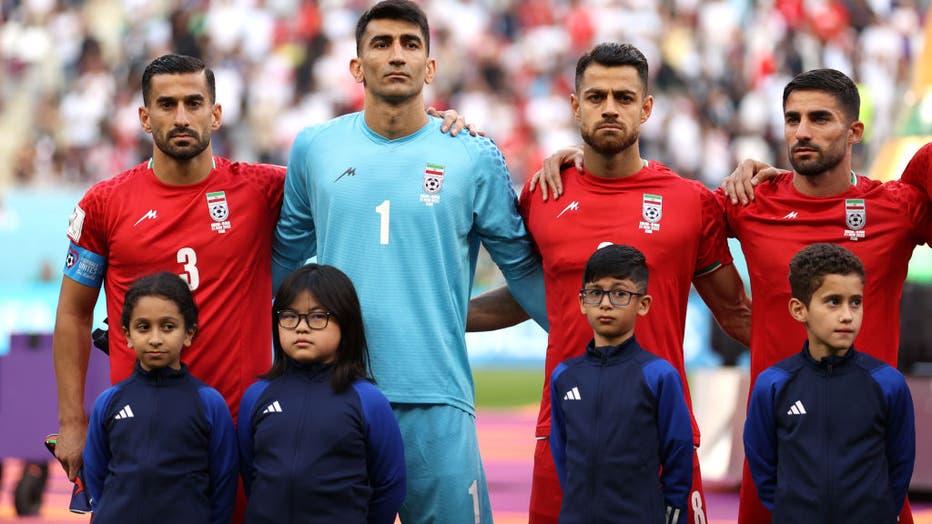 Iran players line up for the national anthem prior to the FIFA World Cup Qatar 2022 Group B match between England and IR Iran at Khalifa International Stadium on November 21, 2022 in Doha, Qatar. (Photo by Julian Finney/Getty Images)

Before international matches, Iran's players usually sing the national anthem with the right hands on their heart. On Monday they stood silently, their arms draped around each other's shoulders, prompting Iran’s state TV to cut from a close-up of the players’ faces to a wide shot of the pitch.

During the match, the players didn't celebrate their two goals, something that has become common in Iranian league matches since the protests began.

Qatar, the host country of the World Cup, is just a short flight across the Persian Gulf from Iran, and has emerged as a rallying point for Iranian political mobilization.

Many Iran fans wore T-shirts or waved signs printed with the mantra of the uprising — "Woman, Life, Freedom" inside the Khalifa International Stadium in Doha. Others wore T-shirts bearing the names of female protesters killed by Iranian security forces in recent weeks.

Other fans dressed in conservative black chadors and hijabs in the color of the Iranian flag cheered loudly for their national team.

And in the 22nd minute of Iran’s first match - a reference to her age when she died - some fans chanted Amini's name, but the chant quickly faded out and was replaced by "Iran."

Iran lost 6-2 to a superior England team, but many say the display shown by the Iranians overshadowed the loss. 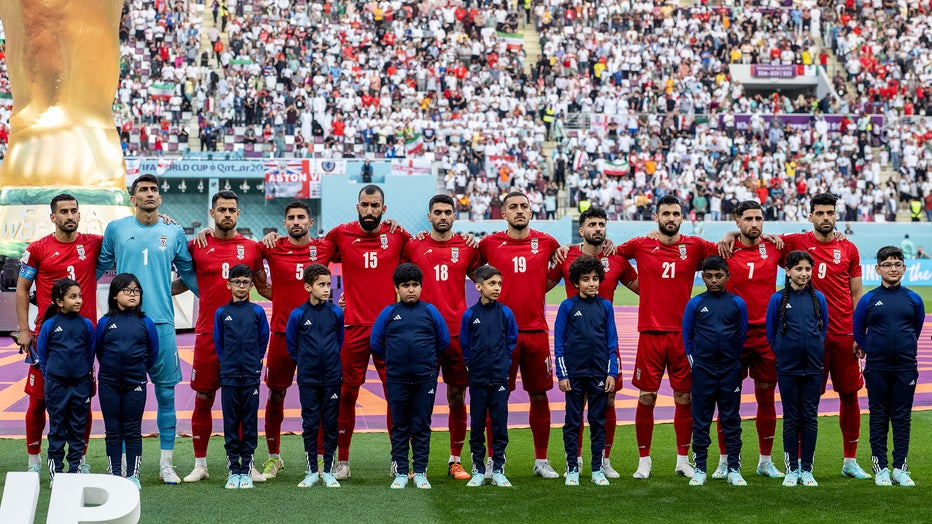 The Iranian government, for its part, has tried to encourage citizens to support their team against Iran's traditional enemies. Iran plays the United States on Nov. 29 — a contentious showdown that last occurred at the 1998 World Cup in France.

Meanwhile, security forces in Iran have violently cracked down on demonstrations, killing at least 419 people, according to Human Rights Activists in the country, a group that has been monitoring the protests.