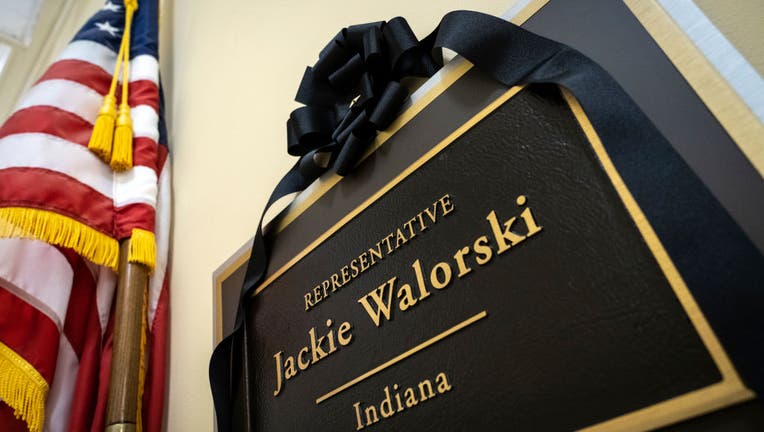 WASHINGTON, DC - AUGUST 4: A black ribbon adorns the nameplate of the late Rep. Jackie Walorski (R-IN) at her office in the Cannon House Office Building on August 4, 2022 in Washington, DC. Walorski, 58, and two staff members were killed in a car cra

The Indiana GOP has selected businessman Rudy Yakym to replace late Rep. Jacki Walorski, R-IN, on the November ballot, according to a Saturday announcement.

Yakym previously served as finance director on Walorski's 2012 Congressional campaign, and he was one of 12 candidates seeking to fill Walorski's spot on the November ballot after she was tragically killed in a traffic accident in early August.

"Congratulations to Rudy Yakym, our Second Congressional District nominee for both the upcoming special and general elections," he wrote. "Rudy will be a strong voice for northern Indiana and continue Jackie Walorski’s legacy of fighting for conservative values in Washington, D.C."

Yakym is the favorite in both elections.

Yakym won an in-party election to become the nominee last week. Walorski's husband, Dean Swihart, endorsed him for the role as well, calling Yakym "a political outsider who has what it takes to stand up to the Pelosi-Biden agenda."

Walorski and two of her staffers died in a traffic accident after their vehicle swerved into oncoming traffic. Police say it was the congresswoman's vehicle that cross the center line.

Walorski, 58, communications director Emma Thomson, 28, and district director Zachary Potts, 27, were all killed in the crash. Edith Schmucker, 56, was the sole occupant of the other vehicle, and she was killed as well. Authorities say Potts was driving the SUV.