Rabies is a preventable viral disease most often transmitted through the bite of a rabid animal.

BOISE, Idaho - An Idaho man died of rabies in the state’s first reported case since 1978, according to a state health department news release.

The Idaho Department of Health and Welfare, along with Central District Health, announced on Thursday that an unidentified man from Boise came into contact with a bat after it flew near him and got caught in his clothing. The man did not believe he suffered any bites or scratches and did not seek further treatment.

The encounter happened in August and the man fell ill in October. He was hospitalized in Boise before he died, according to the state health department. Investigations after his death revealed the man died of rabies.

Family members of the individual are being tested and monitored for possible exposure, the health department added. 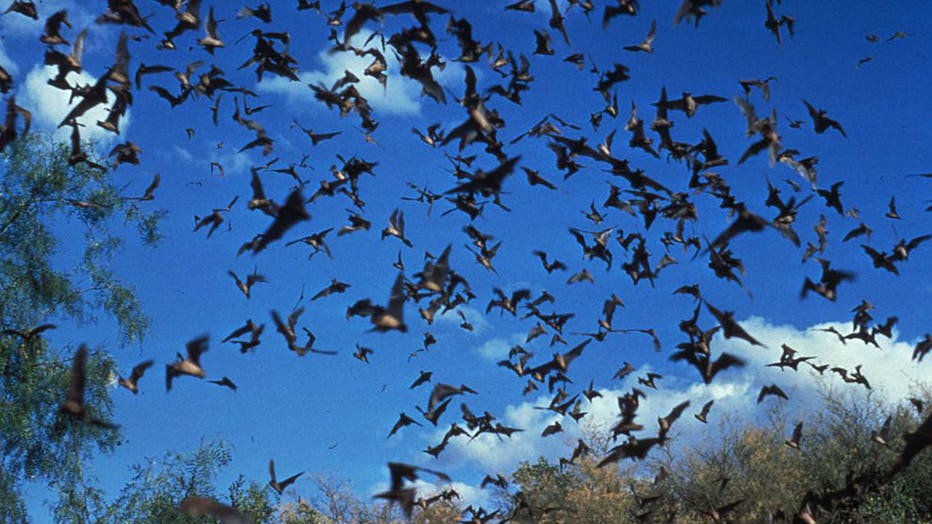 FILE - Horde of bats flying in the air.

RELATED: US adults under 60 should get hepatitis B vaccine, federal advisory panel says

Though it is rare, rabies can be transmitted to people and animals through direct contact with the saliva of an infected animal, according to the U.S. Centers for Disease Control and Prevention.

The virus can be transmitted if infected saliva makes contact with broken skin or mucous membranes in the eyes, nose, or mouth, the CDC says.

Another type of transmission, which is extremely rare, is through inhalation of the "aerosolized rabies virus," according to the CDC.

This tragic case highlights how important it is that Idahoans are aware of the risk of rabies exposure," said Idaho State Epidemiologist Dr. Christine Hahn. "Although deaths are rare, it is critical that people exposed to a bat receive appropriate treatment to prevent the onset of rabies as soon as possible."

There are approximately 5,000 reported cases of animal rabies each year, according to the CDC, and more than 90% of those cases occur in wildlife. Between 1960 and 2018, there were a total of 127 human rabies cases reported in the U.S., and 70% of those were attributed to exposure to bats.

Though human cases of rabies are rare, according to the Idaho Department of Health and Welfare, exposure to rabies is a common occurrence in the U.S., with an estimated 60,000 Americans receiving post-exposure vaccinations each year.

"Idahoans are reminded that bats can become infected with rabies. While bats can be beneficial to our environment, people should be wary of any bat encounter, including waking up to a bat in your room, or any situation where there may have been a bite or scratch," said Dr. Leslie Tengelsen, state public health veterinarian.

"Every year we have several people and pets exposed to rabies in our district, generally spring through fall," said Central District Health Communicable Disease Control Program Manager Lindsay Haskell. "We want our residents and visitors to Idaho to be informed of the risk of rabies, to take appropriate steps to limit risk, and to take action when necessary."