NEW YORK - Hunter Biden, son of President Joe Biden and an ongoing target for conservatives, has a memoir coming out April 6.

The book is called "Beautiful Things" and will center on the younger Biden's well publicized struggles with substance abuse, according to Gallery Books, an imprint of Simon & Schuster. Acquired in the fall of 2019, "Beautiful Things" was kept under wraps even as Biden's business dealings became a fixation of then-President Donald Trump and others during the election and his finances a matter of investigation by the Justice Department.

"In his harrowing and compulsively readable memoir, Hunter Biden proves again that anybody — even the son of a United States President — can take a ride on the pink horse down nightmare alley," King writes in his blurb. "Biden remembers it all and tells it all with a bravery that is both heartbreaking and quite gorgeous. He starts with a question: Where’s Hunter? The answer is he’s in this book, the good, the bad, and the beautiful."

In a snippet released by Gallery, Biden writes in his book, "I come from a family forged by tragedies and bound by a remarkable, unbreakable love." 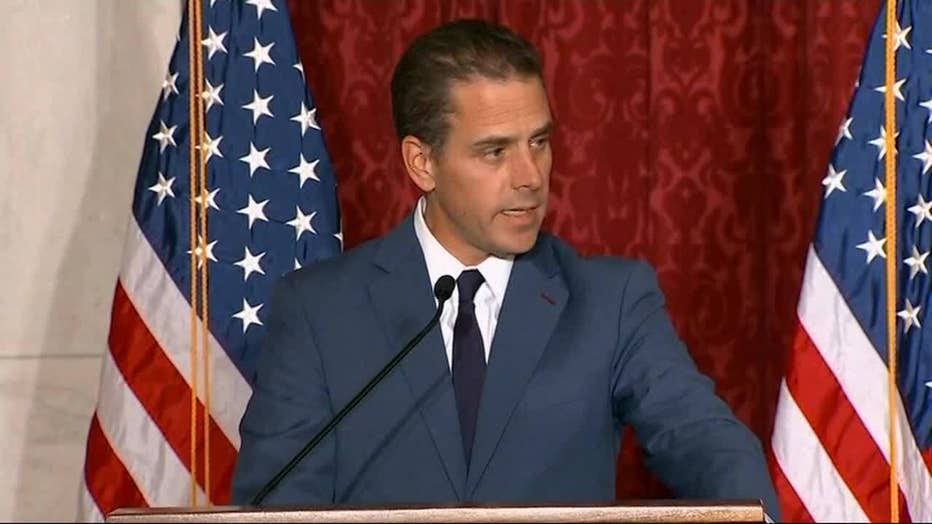 The president and first lady released a statement Thursday saying, "We admire our son Hunter’s strength and courage to talk openly about his addiction so that others might see themselves in his journey and find hope."

During one of last fall's presidential debates, Joe Biden defended his son from attacks by Trump.

Hunter Biden, who turned 51 Thursday, is the oldest surviving child of the president, who lost his first wife and 1-year-old daughter, Naomi, in a 1972 car accident, and son Beau Biden to brain cancer in 2015. The title of Hunter's book refers to an expression he and his brother would use with each other after Beau's diagnosis, meant to emphasize what was important in life.

Hunter Biden is a lawyer and former lobbyist whose work helped lead to the first impeachment of Trump. Biden joined the board of the Ukrainian gas company Burisma in 2014, around the time his father, then U.S. vice president, was helping conduct the Obama administration’s foreign policy in that region. Trump and others have insisted that Biden was exploiting his father's name, and they raised unsubstantiated charges of corruption. The House of Representatives voted to impeach Trump in 2019 after learning that he had pressured Ukraine's president to announce it was investigating the Bidens. Trump was acquitted by the Senate.

Last December, Hunter Biden confirmed that the Justice Department was looking into his tax affairs, and The Associated Press subsequently reported that he had received a subpoena asking about his interaction with numerous business entities. Though Trump made clear publicly that he wanted a special counsel to handle the investigation, then-Attorney General William Barr did not appoint one. Biden has denied any wrongdoing.

Financial terms for "Beautiful Things," which was written in collaboration with the author and journalist Drew Jubera, were not disclosed. Biden and his publisher likely will face criticism from Republicans for his memoir, although books by presidential family members are nothing new. During Trump's presidency, son Donald Trump Jr. released two books, "Triggered" and "Liberal Privilege."

President Biden has pledged that, unlike during the Trump administration, no family members would work in the White House. The book was in the works before he became the Democratic frontrunner in the presidential campaign.

New York publishers often take on authors with a wide range of political viewpoints, and Simon & Schuster has released books by Trump and Sean Hannity, along with such anti-Trump bestsellers as former National Security Advisor John Bolton's "The Room Where It Happened" and presidential niece Mary Trump's "Too Much and Never Enough."

The publisher signed up a book last fall by a leading Trump supporter in Washington, Sen. Josh Hawley of Missouri, but dropped it in the wake of Hawley's support for the Jan. 6 protest that led to the violent siege of the U.S. Capitol by Trump supporters who wrongly believed that the president had been reelected.