House Speaker Nancy Pelosi was meeting privately with factions of lawmakers throughout the day and Biden cleared his schedule to work the phones, Democrats determined to push ahead, strike a deal over his bigger $3.5 trillion effort and avoid what would be a stunning setback if voting on the public works bill failed or had to be scrapped.

Democrats are deeply at odds, trust torn, as progressive lawmakers threaten to withhold votes on the roads-and-bridges infrastructure bill they view as insufficient unless it is paired with Biden's broader vision. In the narrowly controlled House, Pelosi has no votes to spare.

All this on a day that was a partial win for Biden and his party with Congress ushering through legislation to keep the government running past Thursday’s fiscal yearend deadline and avert a federal shutdown that had been threatened by Republican blockades.

RELATED: What happens when the government shuts down?

"Step by step," Pelosi said at the Capitol, suggesting a deal with Biden was within reach.

The risks are clear, but so is the potential reward as Biden and his party reach for a giant legislative accomplishment — promising a vast rewrite of the nation’s balance sheet with an ever-slim majority in Congress. His idea is to essentially raise taxes on corporations and the wealthy and use that money to expand government health care, education and other programs — an impact that would be felt in countless American lives.

At the White House, Press Secretary Jen Psaki said that Biden was making calls, and she acknowledged the process looked messy from the outside, the "sausage-making" of Capitol Hill.

The public works bill is one piece of that broader Biden vision, a $1 trillion investment in routine transportation, broadband, water systems and other projects bolstered with extra funding. It has won broad, bipartisan support in the Senate but has now become snared by the broader debate.

Attention remains squarely focused on Sens. Joe Manchin of West Virginia and Kyrsten Sinema of Arizona, centrist Democrats who helped steer that bipartisan bill to passage, but a concern that the overall size of Biden’s plan. They view it as too big, but have infuriated colleagues by not making any counter-proposals public.

Under scrutiny, Manchin called an impromptu press conference Thursday outside the Capitol, insisting he has been clear from the start — his topline is $1.5 trillion — when in fact he has repeatedly given mixed signals about what he could support.

"I'm willing to sit down and work on the $1.5," Manchin told reporters, as protesters seeking a bigger package and Biden's priorities chanted behind him. 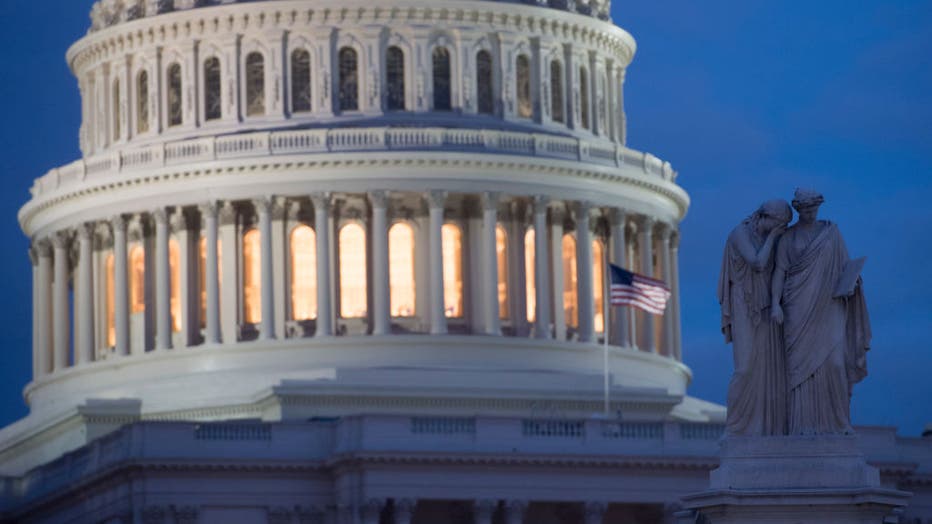 The US Capitol Building is seen at dusk in Washington, DC, Feb. 6, 2018, as lawmakers work to avert a government shutdown later this week. (Photo by SAUL LOEB/AFP via Getty Images)

Manchin said he told the president as much during their talks this week. Tensions spiked late Wednesday when Manchin sent out a fiery statement, decrying the broad spending as "fiscal insanity" and warning it would not get his vote without adjustments.

Sinema was similarly working to stave off criticism and her office said claims that she has not been forthcoming are "false" — though she has not publicly disclosed her views over what size package she wants and has declined to answer questions about her position.

Sinema has put dollar figures on the table and "continues to engage directly in good-faith discussions" with both Biden and Senate Majority Leader Chuck Schumer, spokesman John LaBombard said in a statement.

The centrist senators' refusal to bring negotiations with Biden to a close enraged progressive lawmakers and almost ensured they would tank the bipartisan public works bill if there was no end in sight to the White House talks with the centrist senators.

House Speaker Nancy Pelosi said progress is being made in the Democratic clash over the bipartisan $1.5 trillion infrastructure deal.

Democrats’ campaign promises on the line, the chairwoman of the Congressional Progressive Caucus, Rep. Pramila Jayapal, said exiting Pelosi’s office that the progressives’ views were unchanged -- they won't vote for one bill without the other.

"We’re gonna stay here all weekend if we need to to see if we can get to a deal," she said.

In a deepening party split, centrists warned off canceling Thursday’s vote as a "breach of trust that would slow the momentum in moving forward in delivering the Biden agenda," said Rep. Stephanie Murphy, D-Fla., a leader of the centrist Blue Dog Democrats.

At the same time, Congress was moving to resolve a more immediate crisis that arose after Republicans refused to approve legislation to keep the government funded past Thursday’s fiscal yearend and raise the nation’s debt limit to avoid a dangerous default on borrowing.

The debt ceiling debate shifts to October, ahead of another deadline when Treasury Department has warned money would run out to pay past bills.

Thursday's congressional floor schedule was filled with question marks in the places where there should be the announced timing of votes.

With Republicans lockstep opposed to the president's big plan, deriding it as slide to socialist-style spending, Biden as been hunkered down at the White House reaching for a deal with members of his own party for a signature legislative accomplishment.

The president canceled a planned trip to Chicago where he was to discuss the importance of COVID-19 vaccines, met separately with Manchin and Sinema at the White House and even showed up at Wednesday evening’s annual congressional baseball game, a gesture of goodwill during the rare bipartisan event among lawmakers.

Together, Sens. Manchin and Sinema are holding the keys to unlocking the stalemate over Biden’s sweeping vision, the heart of his 2020 campaign pledges. While neither has said no to a deal, they have yet to signal yes — and they part ways on specifics, according to a person familiar with the private talks and granted anonymity to discuss them.

Manchin appears to have fewer questions about the revenue side of the equation — the higher taxes on corporations and the wealthy — than the spending plans and particular policies, especially those related to climate change that are important to his coal-centric state. He also wants any expansion of aid programs to Americans to be based on income needs, not simply for everyone.

Though Sinema is less publicly open in her views, she focuses her questions on the menu of tax options, including the increased corporate rate that some in the business community argue could make the U.S. less competitive overseas and the individual rate that others warn could snare small business owners.

Biden insists the price tag actually will be zero because the expansion of government programs would be largely paid for with higher taxes on corporations and the wealthy — businesses earning more than $5 million a year, and individuals earning more than $400,000 a year, or $450,000 for couples.