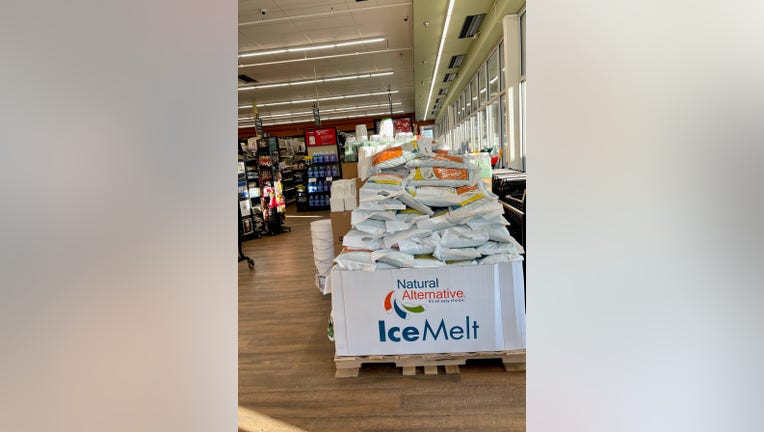 This store in Kensington is ready for tomorrow's snowfall. (FOX 5 DC / Natalie Rubino)

KENSINGTON, Md. - People across the DMV are getting ready for what could be the first big snowfall in years.

The hardware stores are packed today. Some of the most popular items flying off the shelves are salt and shovels.

Strosniders Hardware in Kennsington said they started stocking up on items earlier in the week when the forecast predicted heavy snow.

"Everyone is coming in probably a little antsy but we have all the products they need," Jonathan Aseff, the store's manager, said.

People are making sure to get out ahead of time before stock runs low.

"I got out early because i was afraid that they’d run out," Mary Holliday said after picking up six bags of salt.

"I have 11 grandchildren. They love the snow…sledding, throwing snow balls, everything," Holliday said.

For some young children in the area, Sunday’s storm could be the first snowfall they’ll remember

"My kid has never experienced snow before so this will be exciting for her," Adam Bolezal of Wheaton said. "She’s just excited to see the snow she wants to make a snow man."

Sleds are also flying off the shelves.

"Sleds have been a hot commodity. We have another shipment coming in on Sunday just for this event," Aseff said.

For people not comfortable going inside stores just yet,  Strosniders is allowing customers to order online or by phone.

"They can come in and pick it up or we could actually bring it to your vehicle," Aseff said.

Other parts of the area are also preparing early.

DOT drivers form local counties and states were out yesterday and will be out again today pretreating the roads with salt and brine.

RELATED: How much snow is expected? Confidence building for ‘double trouble’ winter storm Sunday and Monday