The meet-up comes less than 48 hours after Moore's election. Had Republican candidate Dan Cox won, Hogan said he wouldn't have gotten a tour. The governor did not support Cox and wouldn't say who he voted for in Tuesday's election.

It was a clear contrast and warm welcome Thursday when Democratic Governor-elect Moore arrived.

Moore and Hogan were all smiles after the transition meeting. Governor-elect Moore said that despite political divisions in the nation, it was important to come together as quickly as possible to begin a smooth and peaceful transfer of power in Maryland.

"What the people of Maryland want is for us to have a functioning and an orderly and a smooth transition and to make sure that government is going to focus on them and prioritize them," Moore said.

"I was very pleased to have the honor of welcoming Governor-Elect Wes Moore to the State House and we had a really productive one-on-one conversation—and we also had our teams meeting simultaneously to review and hand off transition documents," Hogan said. "Our entire administration is going to do everything we possibly can to not only ensure a peaceful transition of power, but to help them get up to speed with anything they will need." 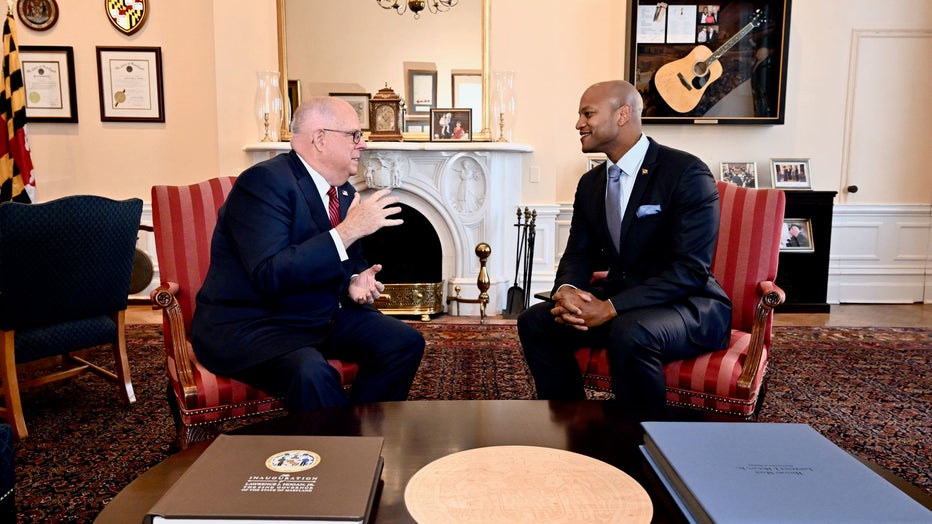 Meanwhile, speculation continues to rise surrounding Governor Hogan's ambitions of running for the 2024 Republican presidential nomination. The governor said Tuesday there was a "repudiation of crazy politics" in his party and said so-called "commonsense conservatives" like him who focused on the economy, crime and education did better than those that didn't.

"I don’t want to get into a political debate with the governor-elect, but I’ve said for many years that I was concerned about the direction of my party and I think we saw a pretty clear repudiation of crazy politics," Hogan said.

Before parting ways, Governor Hogan said he wants to host the governor-elect again, but next time with Moore's family, for a tour of the governor's mansion in Annapolis.

Moore will become the first African-American governor in Maryland history when he is sworn into office in January.

Check out the meeting below: