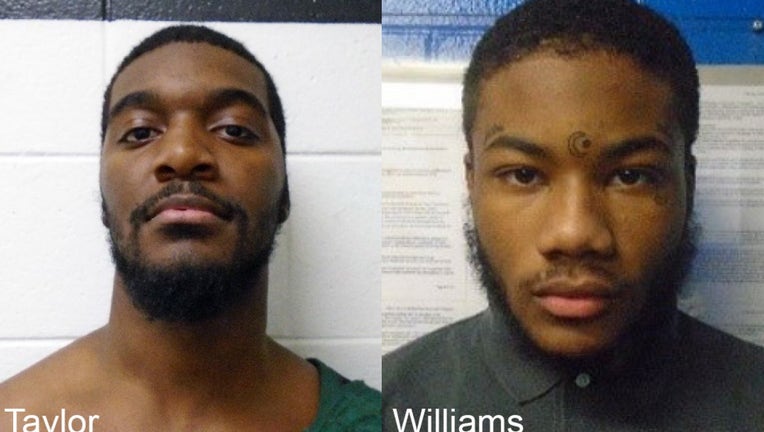 Police say Jabar Taylor of DC and Rashad Williams of Spotsylvania County were arrested in Michigan after breaking out of a juvenile detention center near Richmond.

RICHMOND, Va. - Police say two fugitives are behind bars again after a coordinated jailbreak from a Virginia juvenile detention center involving a cord, a hole in a fence and a getaway car.

20-year-old Jabar Taylor of D.C. and 18-year-old Rashad Williams of Spotsylvania County, Virginia were arrested without incident Saturday in a hotel in Battle Creek, Michigan.

The search began July 13, when the pair broke out of the Bon Air Juvenile Detention Center near Richmond.

Police say the two choked out a correctional officer with a cord, then took the officer's keys to open their cell door.

They then escaped the facility through a hole cut through a fence, then got in a getaway car that had been waiting for them.

Police believe the pair fled first to Pennsylvania before heading west to Michigan. The search for Taylor and Williams spanned nearly two weeks and 700 miles before their capture.

“This complex investigation and arrest is yet another example of the tenacity and the 'never give up' attitude displayed by Deputy U.S. Marshals and our state and local law enforcement partners all over this great country," said Nick E. Proffitt, U.S. marshall for the Eastern District of Virginia. "Hours of dedicated investigative work by our law enforcement team ensured the safety of the public by getting these very dangerous escapees back into custody quickly and safely."

Taylor, 20, was serving a sentence for convictions of two counts of second-degree murder and aggravated malicious assault. Williams, 18, was previously convicted of malicious wounding and robbery.

Both men were scheduled to be transfered to an adult detention center on their 21st birthdays.

Taylor and Williams were arrested after two of their alleged accomplices.

Destiny L. Harris, 23, of Chesterfield County, Va. was taken into custody July 14 on two counts of aiding with the escape of a juvenile.

Darren Briggs, 42, of Lawrenceville, Va., was arrested July 15 for providing a cell phone to a prisoner.