The Banksy art piece, "Love is in the Bin," which originally shredded itself upon being sold the first time, was just sold again at Sotheby's for a world record of nearly $22 million. The name of the buyer was not immediately released.

NEW YORK - One of artist Frida Kahlo’s final self-portraits sold for a record $34.9 million on Tuesday — the highest known price ever paid for a piece of Latin American art.

The 1949 self-portrait, titled "Diego y yo" (Diego and I), was sold Tuesday evening for the record price at Sotheby’s Modern Evening Sale in New York City. The portrait last sold at an auction in 1990 for $1.4 million, the company said.

The painting was purchased by the Eduardo F. Costantini Collection, according to Sotheby’s. Constantini, an Argentine real estate developer and businessman, is a renowned collector committed to supporting Latin American art and artists. He also founded MALBA, the Museum of Latin American Art of Buenos Aires. 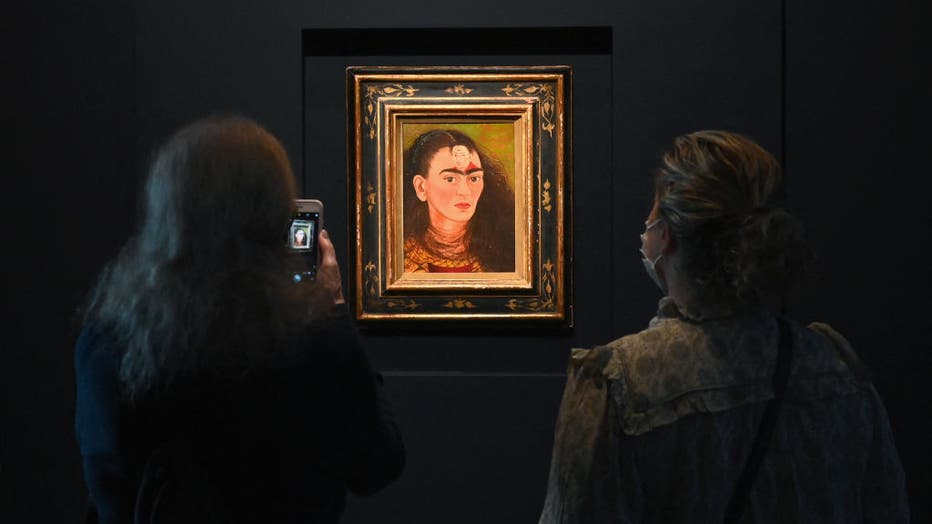 People look at Frida Kahlo's final 'Bust' Self-Portrait "Diego y yo" (Diego and I) at Sotheby's on Nov. 5, 2021, in New York City. (Photo by ANGELA WEISS/AFP via Getty Images)

"Frida Kahlo's status as a global cultural icon is indisputable, and tonight — with this outstanding result — she took her place center stage among the titans of the art market," Julian Dawes, Sotheby’s co-head of impressionist and modern art in New York, said in a statement.

"Diego y yo," which was painted in June of 1949, is one of Kahlo’s "bust" self-portraits — which are among her most famous and coveted works of art, Sotheby’s said. Her finest examples of such pieces of art were created in the 1940s, the company added.

"Following her second marriage to famed Mexican muralist Diego Rivera, the relentlessly curious Kahlo during this period synthesized incredibly diverse influences ranging from Aztec and Eastern mythology to medicine and botany," Sotheby’s said in a description. "She also depicted her tumultuous experiences with chronic illness and her increasingly complicated relationship with Rivera to build a rich, deeply personal iconography."

The 11.6- by 8.8-inch "Diego y yo" oil painting depicts a distraught Kahlo with a second, smaller portrait of her husband, Diego Rivera, at the center of her forehead. Rivera bears a third eye to symbolize the degree to which he occupied her consciousness, Sotheby’s said. 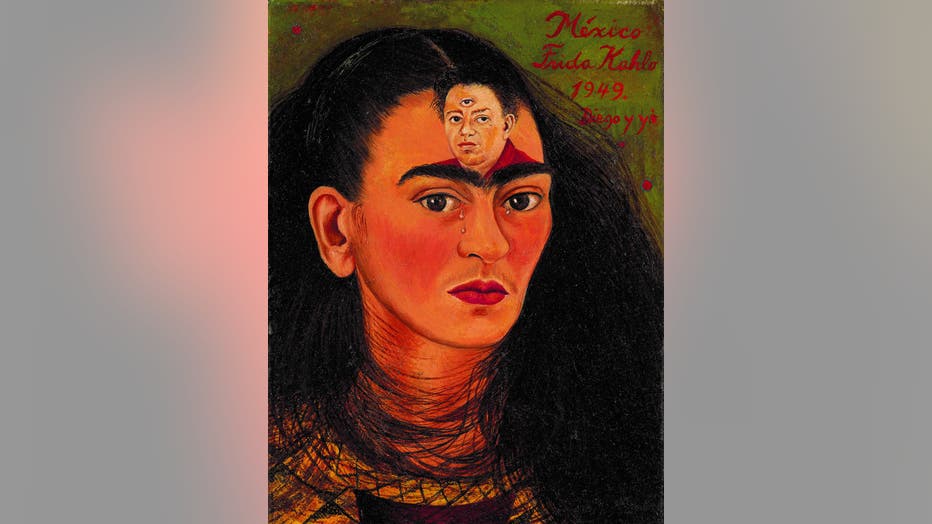 "This charged and emotionally resonant work alludes to Rivera’s relationship with the Mexican diva María Félix, of whom the muralist painted a sensual portrait also in 1949," Sotheby’s said in the description. "This relationship was the subject of numerous rumors, and although she joked about it publicly, Kahlo, who was a good friend of Félix, was deeply wounded."

In the self-portrait, Kahlo has loose hair — rather than her usual tightly laced braids — with flushed cheeks and an intense, tearful gaze. She’s also wearing a now-iconic "huipil," a blouse belonging to the traditional dress of the women of the Isthmus of Tehuantepec (Tehuanas).

Experts say Kahlo’s work is celebrated for its raw emotive power, and this particular painting captures the inner distress — as shown with three tears flowing from her eyes.

"When I look at this painting, the phrase ‘abre los ojos,’ Spanish for ‘open your eyes,’ immediately comes to mind," Dawes said.

Anna Di Stasi, Sotheby’s director of Latin American art, added in a statement, that Kahlo remains "a global icon of modern art whose work is beloved around the world."

"Diego y yo epitomizes the painstakingly detailed rendering, complex iconography, and deeply personal narratives that are hallmarks of her mature painting," Stasi said.