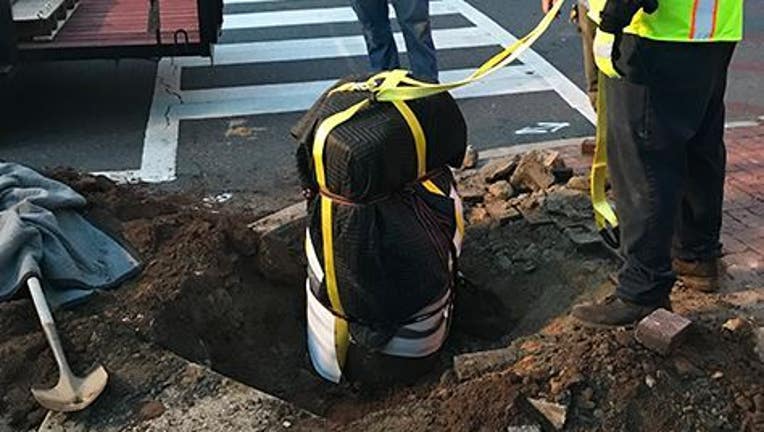 FREDERICKSBURG, Va. - A 176-year-old stone block that was used for slave auctions in Virginia will go on display at the Fredericksburg Area Museum, with signs explaining the context of recent protests against racial injustice that left it covered in graffiti.

The knee-high stone block sat for nearly two centuries in downtown Fredericksburg until the city removed it recently. Now it's on loan to the museum, which will put in on display by mid-November, with the graffiti still intact, The Free Lance-Star reported Sunday.

Sara Poore, the museum’s president and CEO, said visitors will have the option to see the actual stone or just an image of it, and there will be “clear signage that indicates the tone of the graffiti.”

“We will also discuss the recent events and the impact the stone has/had on the conversation,” Poore said. “It is our goal to use the stone as a springboard for community conversations.”

The city pulled the 800-pound (363-kilogram) marker from the ground in June after its removal was delayed for months by lawsuits and the coronavirus pandemic.

The weathered stone was sprayed with graffiti and chants of “move the block” erupted during local demonstrations over the death of George Floyd in Minneapolis, city officials said.

A local chapter of the NAACP called for the stone’s removal in 2017, saying it was a relic of “a time of hatred and degradation” that should not be displayed along a main thoroughfare.