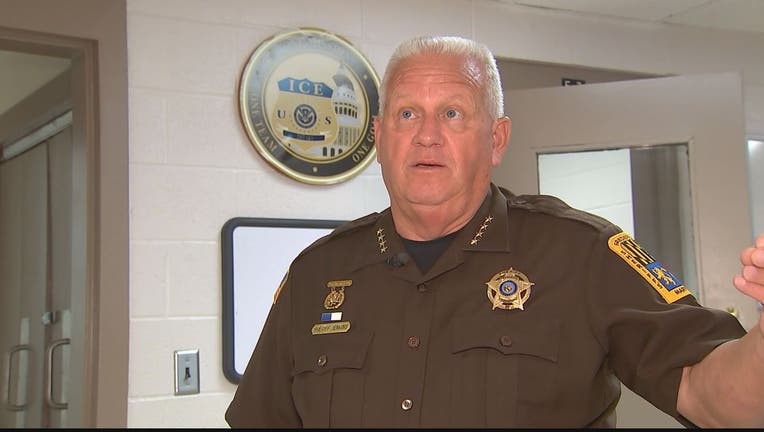 FREDERICK COUNTY, Md. - The sheriff in Frederick County Maryland is defending his cooperation with federal officials to enforce immigration laws.

Sheriff Chuck Jenkins says he does not want the kinds of crimes committed by illegal immigrants in other counties, happening in Frederick. Jenkins, for the past 12 years a signed a “287-g” agreement with Immigration and Customs Enforcement.

He says he has no doubt the cooperation agreement has led to greater public safety in Frederick County.

“When I can say that we’ve taken over 1,500 criminals and have them deported out of this county and more than 100 are criminal gang members, don’t we have a safer community unlike neighboring sanctuary counties?” the sheriff told FOX 5.

The sheriff in Frederick County Maryland is defending his cooperation with federal officials to enforce immigration laws.&nbsp;

FOX 5 was granted exclusive access to see how the “287-g” program works behind the bars of the Frederick Adult Detention Center.

In Frederick County, people who are arrested are first brought to a booking room, where they are fingerprinted.

At that time, they are also asked two questions – where were you born? In what country are you a citizen? If the inmate answers that they are not a citizen of the United States, then moved to the “ICE Unit.”

The ICE unit is staffed 24/7 – 17 of the Frederick County’s 133 corrections officers are certified as immigration officers at the federal law enforcement training center in South Carolina.

If a criminal suspect is found to be in the United States illegally, a detainer is issued for deportation.

Major Michael Cronise says that when criminal illegal immigrants finish their sentence without alerting federal officials they would be free to return to the streets.

He uses the example of one inmate who was an illegal immigrant who was convicted of sexually assaulting a child.

Once he had served his time, 287g made sure he was deported out of the United States.

“He ended up getting sentenced in our facility, with good behavior and work time they were out in 14 months. This program a convicted sexual predator from returning to the streets and he was deported from this county, I don’t know what I can say other than that," Cronise said.

Sheriff Chuck Jenkins says he is trying to make an effort to educate the public about how the program works, because he is concerned, political leaders could move to cut funding or curtail his cooperation with ICE.

Jenkins says he does not want to see Frederick County embrace so-called “Sanctuary City” polices like he says he see in Montgomery and Prince George’s County, which do not cooperation with Federal Immigration enforcement.