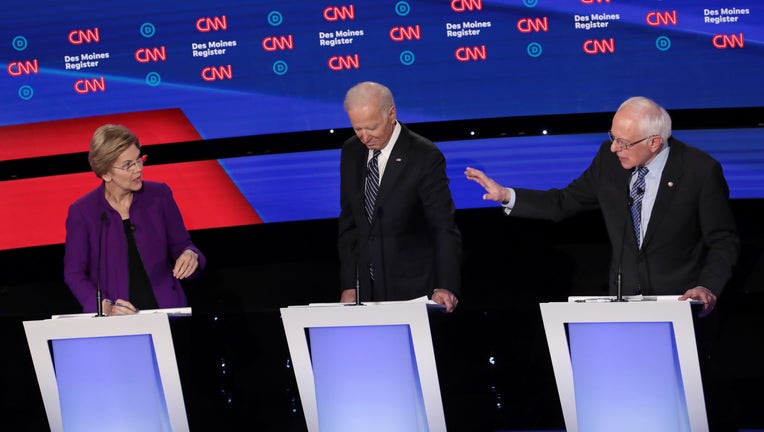 The Democratic nomination race has tightened at the top.

According to a new Fox Poll, Bernie Sanders has pulled within three percentage points of frontrunner Joe Biden, who appears to have lost support to billionaire Michael Bloomberg.

Biden receives 26 percent support among Democratic primary voters and Sanders 23 percent. They are followed by Elizabeth Warren at 14 percent, Bloomberg 10 percent, Pete Buttigieg 7 percent, Andrew Yang 5 percent, and Amy Klobuchar and Tom Steyer are at 3 percent apiece. All others receive 1 percent or less. 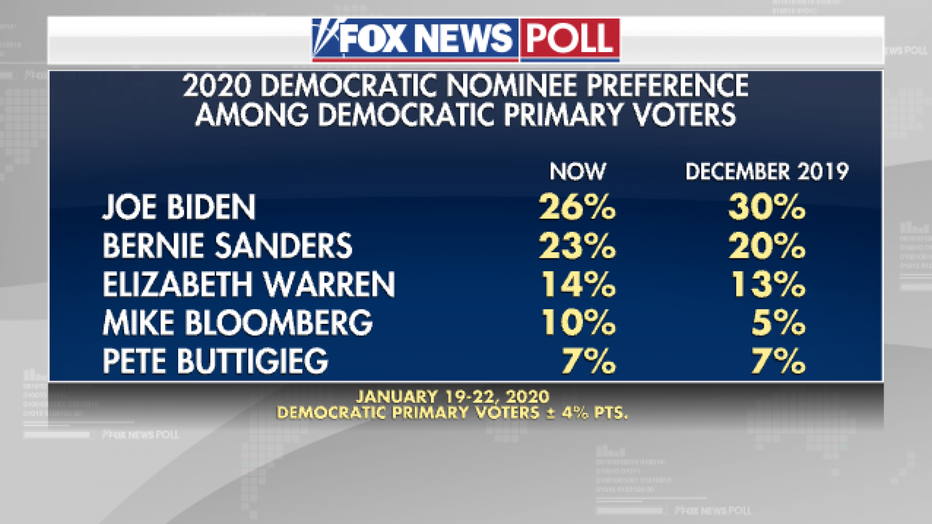 The former vice president’s 3-point advantage is his narrowest to date. He’s down 4 points since last month, while Bloomberg (+5) and Sanders (+3) have made gains.

In December, Biden was up 10 points over Sanders. His largest lead was 19 points in June.

The poll, released Sunday, shows Biden’s edge comes largely from men, voters over age 45, self-described moderates/conservatives, and voters with a college degree. Sanders is the favorite among very liberal voters and those under 45. The two candidates are within one point of each other among women and voters without a college degree.

“Biden cannot be happy about Bloomberg’s growing presence in the race as both are drawing support from the same pool of older, moderate voters who have provided most of Biden’s advantage up until now,” says Chris Anderson, a Democrat who conducts the survey with Republican Daron Shaw.

Almost half (48 percent) of Democratic primary voters think a nominee who has strongly liberal views would have a tougher time beating President Trump. Nearly as many say being gay (47 percent) or a woman (43 percent) would hold back a candidate. Fewer consider it a disadvantage to be a person of color (37 percent), under age 40 (35 percent), or over 70 (33 percent). The smallest number sees being a white man over 70 as a hindrance (27 percent). 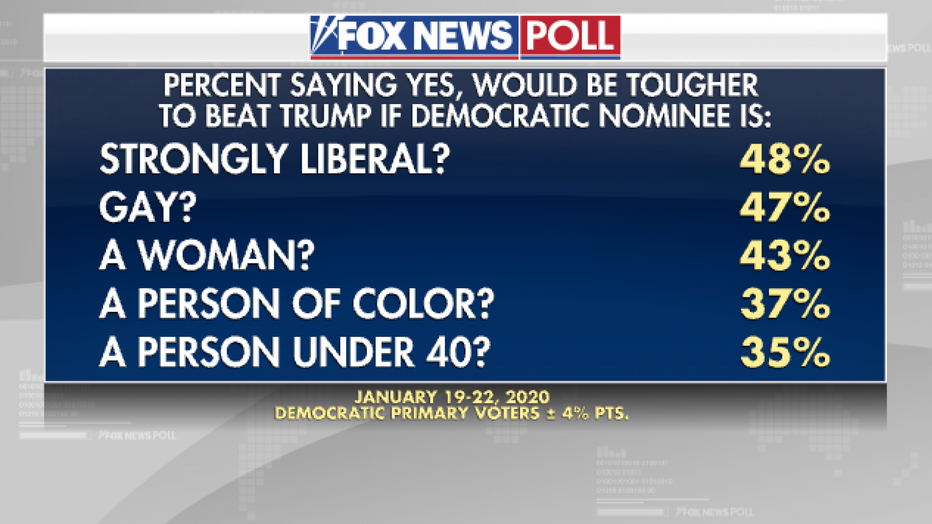 The top four Democrats are white and over 70. So is Trump.

Most Democratic primary voters are either dissatisfied (27 percent) or angry (62 percent) with the Trump administration, while 4 percent are enthusiastic and 6 percent are satisfied. 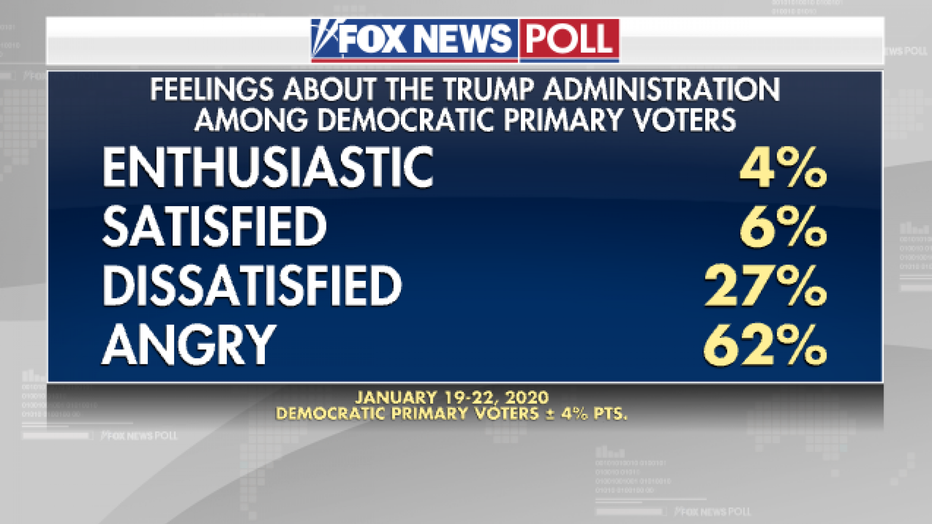 That helps explain why beating Trump remains the priority for Democrats. Seventy-three percent say it is “extremely” important their nominee can win in November. Sixty percent think it’s extremely important their nominee is authentic, while about half want a candidate who has the best policy ideas (53 percent) and the right experience (51 percent). 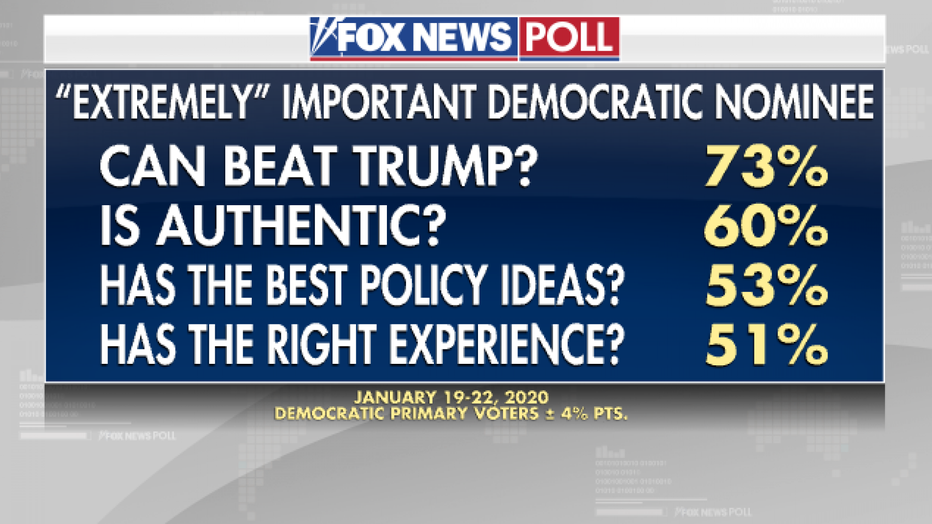 On each characteristic, Biden and Sanders are the top two picks, with roughly equal support among those saying it is extremely important.

Sanders has the most Democratic primary voters who view him as honest and trustworthy. Eighty-two percent feel that way about him compared to 73 percent for both Biden and Warren. About two-thirds think Buttigieg (64 percent) is honest, while just over half say the same about Bloomberg (54 percent) and Klobuchar (53 percent).

Warren’s honesty number is down 9 points among primary voters since early October, when it stood at 82 percent.

Having a low honesty rating doesn’t necessarily hurt your chances of winning. In 2016, only 33 percent of voters said they thought Trump was honest, which was a touch lower than Hillary Clinton’s 36 percent. In addition, 28 percent of those voting for Trump said he was dishonest. Currently, 38 percent of all voters and 78 percent of Republicans say Trump is honest.

Despite about one third of Democratic primary voters (35 percent) being dissatisfied with their field of candidates, 82 percent say they will vote for whoever the nominee is -- even if it’s not their preferred candidate. 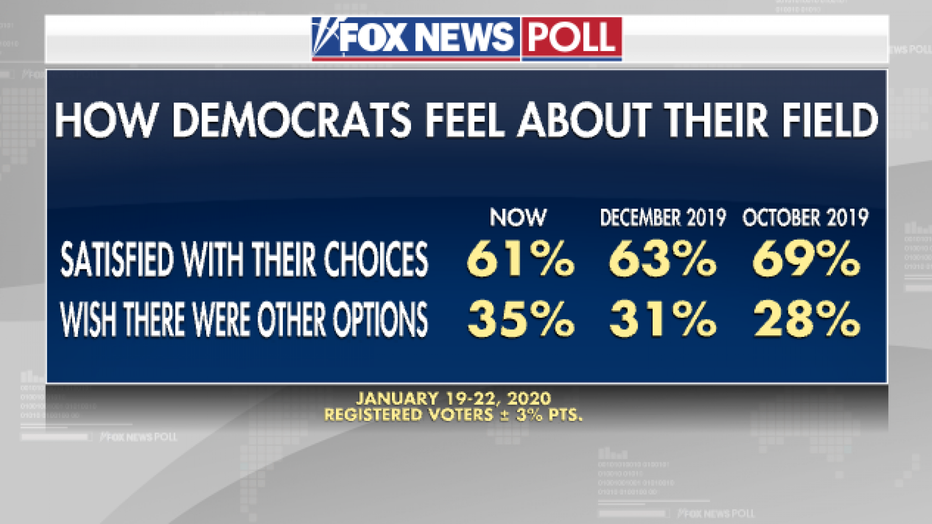 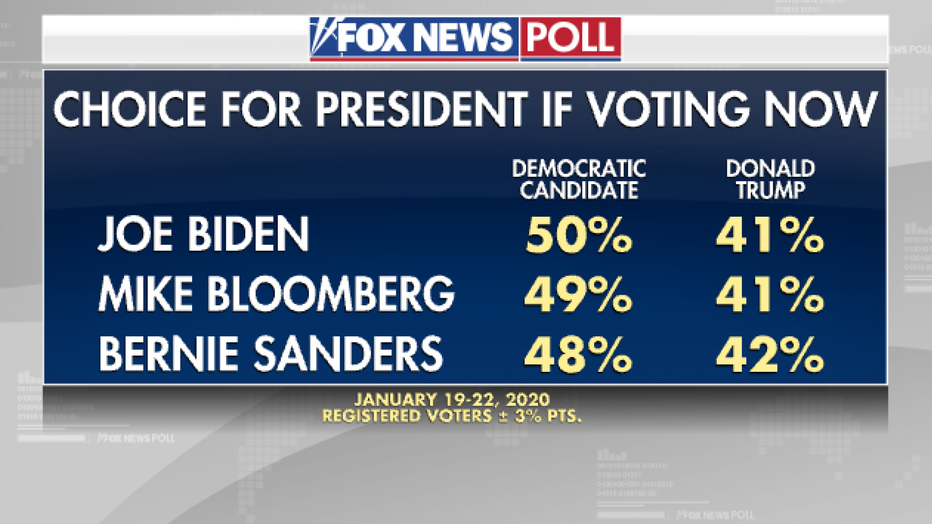 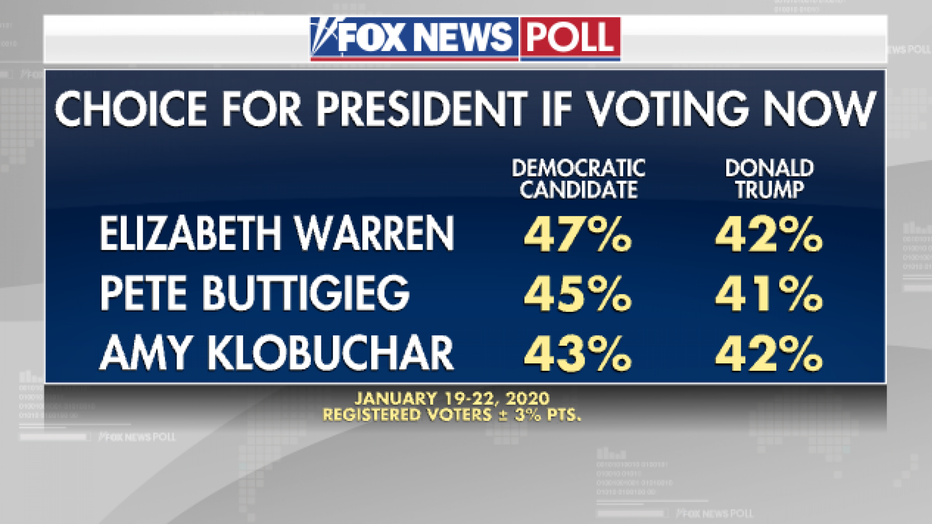 In all cases, there are enough undecided/third-party voters to swing the race either way (10-14 percent).

In counties where the 2016 vote for president was within 10 points, Biden tops Trump by just 2 points.

“It seems impeachment has hurt Trump, as he’s given back ground he gained against the Democrats late last fall,” says Shaw.  “But the race remains tight, especially in swing counties.”

Interest in the election remains high, with over half of both Democrats (58 percent) and Republicans (56 percent) “extremely” interested.

Conducted January 19-22, 2020 under the joint direction of Beacon Research (D) and Shaw & Company (R), this Fox News Poll includes interviews with 1,005 randomly chosen registered voters nationwide who spoke with live interviewers on both landlines and cellphones. The poll has a margin of sampling error of plus or minus 3 percentage points for all registered voters and 4 points for Democratic primary voters (495).