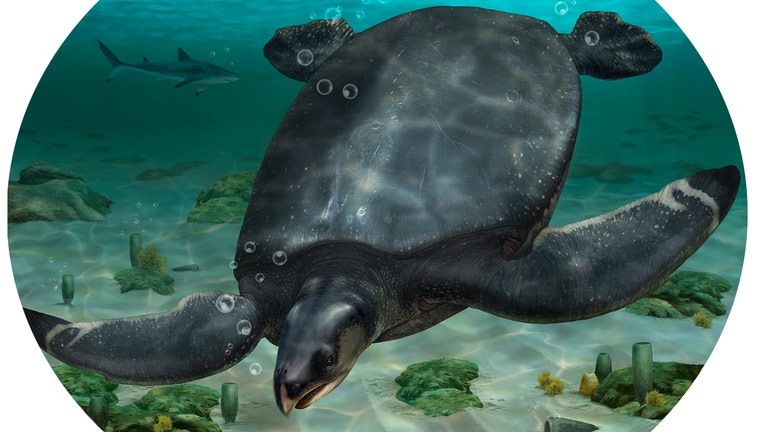 The fossil of an ancient giant sea turtle — estimated to have been as long as a small car — was discovered in Spain, representing the largest marine turtle to have been found in Europe.

Until now, the largest known marine turtles, such as the ancient extinct Archelon, were only found near the North American continent. In comparison, no known European turtle – extinct or living – has exceeded 1.5 meters (4.9 feet) in shell length, the team behind the new discovery said.

But the remains of a new marine turtle specimen, which has been named Leviathanochelys aenigmatica, were uncovered in northeastern Spain and appeared nearly as large as Archelon.

Dr. Àngel H. Luján, Dr. Albert Sellés, and colleagues authored a description of the new species in a new paper published Thursday in Scientific Reports. The remains, excavated between 2016 and 2021, were fragmented but included an almost complete pelvis and parts of the upper shell, they wrote.

The sea turtle dates back to the Campanian Age, which occurred 83.6 million to 72.1 million years ago during the Cretaceous Period, they added.

"We are optimistic, and believe that it is possible to find more giant turtle species in Europe," Àngel told the U.K.‘s Natural History Museum. "Fragmentary remains of large marine turtles have previously been found throughout Europe, but none of them are as complete as Leviathanochelys."

"Baby Yingliang" is a well-preserved fossilized dinosaur egg that has given scientists another link between prehistoric creatures and modern birds. (Credit: Yingliang Stone Nature History Museum via Storyful)

The paleontologists determined that the turtle had a distinctive prominence of bone that protruded forward from the front of the pelvis — a feature that differs from other marine turtles and indicates that Leviathanochelys represents a new group of ancient marine turtles, according to the paper.

The authors suggested that this protrusion may have been related to the respiratory system.

Based on the size of the pelvis, the authors estimated that Leviathanochelys could have reached a body length of up to 3.74 meters (about 12.3 feet). For comparison, a Chevrolet Spark measures just short of 12 feet, or even two standard-size refrigerators stacked on top of each other. 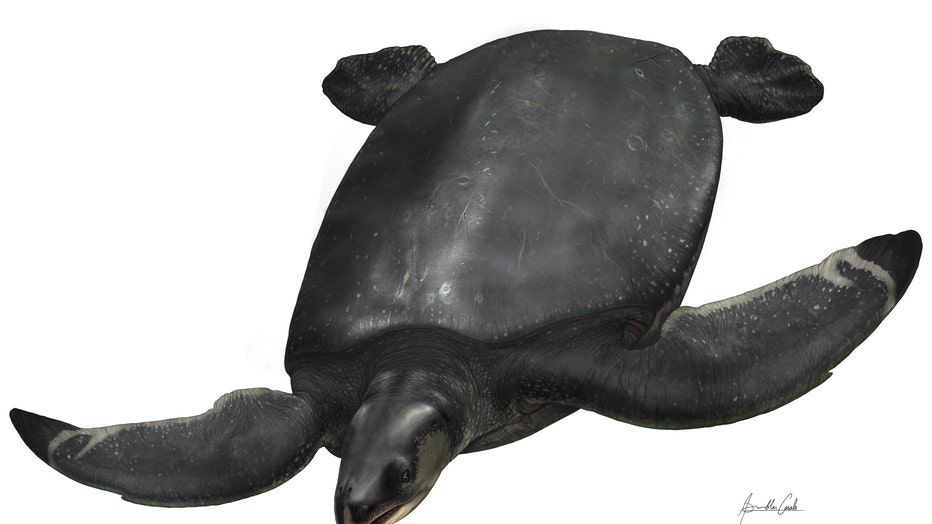 The authors estimated that the maximum width of Leviathanochelys’ pelvis was 88.9 centimeters (35 inches), which is slightly larger than the biggest estimates for Archelon’s best-known specimen of 81 centimeters wide (32 inches). The length of the pelvis from front to back was estimated to be 39.5 centimeters (15.5 inches), slightly smaller than that of Archelon.

This makes Leviathanochelys the largest marine turtle ever discovered in Europe, and one of the largest found worldwide, the authors said.

The team said it also adds to knowledge about trends in the evolution of turtles, suggesting that gigantism in marine turtles developed independently in different lineages in both North America and Europe.

The largest living turtle is the leatherback sea turtle, which can be up to 6 feet and length and weigh between 550 and 2,000 pounds, according to the National Oceanic and Atmospheric Administration’s National Ocean Service.

The leatherback sea turtle tends to nest in the tropics, including in southeast Florida, Puerto Rico, and the U.S. Virgin Islands. However, it’s been spotted as far north as Canada and the Northern Pacific Ocean. 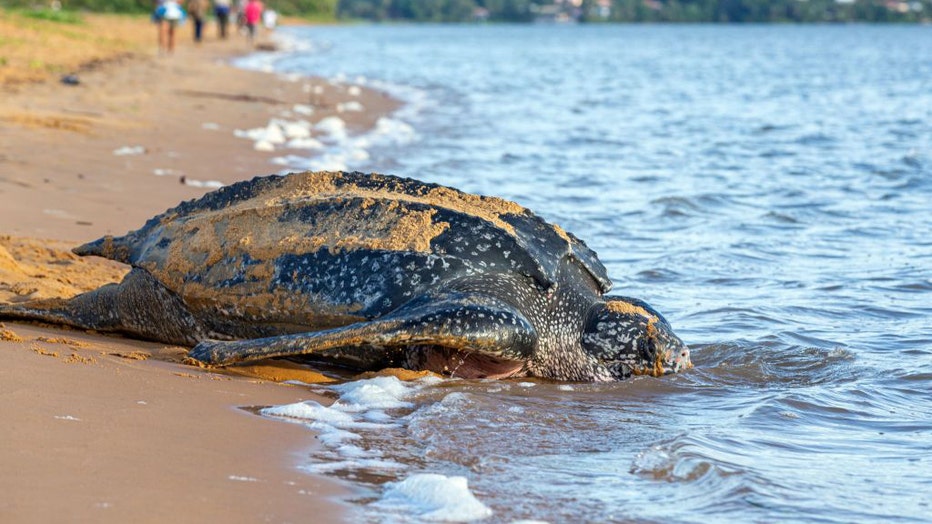 FILE - This picture taken on July 4, 2019, shows a leatherback sea turtle laying eggs under the supervision of Kwata association members on a beach in Remire-Montjoly, French Guiana.(Photo credit: JODY AMIET/AFP via Getty Images)

But still, the leatherback sea turtle is small compared to its ancient relatives.

"Compared to the turtles alive before the end of the Cretaceous, living turtles are not as large as their ancient relatives," Dr. Sandra Chapman, the Natural History Museum's former Curator of Fossil Reptiles and Birds, said in a statement. Chapman has also studied fossil turtles.