Goodell also said he does not believe releasing more information about the investigation into the franchise is "appropriate."

The former employees are asking the league to release more details about the investigation into the Washington Football Team.

Ana Nunez and Melanie Coburn passed the letter along in person.

The letter highlighted what the group sees as evidence of sexist, homophobic and racist behavior in the league – taking special note of headlines that forced then-Las Vegas Raiders coach John Gruden to resign.

The group is demanding change from the league:

"Now it’s time for the NFL to change course and take action to denounce past racist, sexist and homophobic conduct. The first step in doing so is transparency. The NFL must make public the findings of the investigation into the WFT. We are calling on you to demand that the NFL make the findings public. We are calling on you to do the right thing."

"Making a powerful statement that we are here, we want to be heard, we are women who worked for this team, who worked in this league who deserve to be heard," Coburn said.

According to the report, the allegations include unwelcome comments of a sexual nature, and team executives pressuring female coworkers to wear revealing clothing and flirt with clients to close sales deals.

Despite Goodell's statement that Washington Football Team has been appropriately penalized, Coburn says more needs to be done.

"This isn’t over. And there’s a lot more to uncover, and I hope that congress continues to push, because $10 million to Daniel Snyder is like a parking ticket to me," she said.

Goodell says he wants to protect the people who cooperated on the condition of anonymity. Attorneys for the Washington Football Team employees say that isn't true.

The House Oversite Committee has given the NFL until next week to turn over some of the documents associated with the investigation. 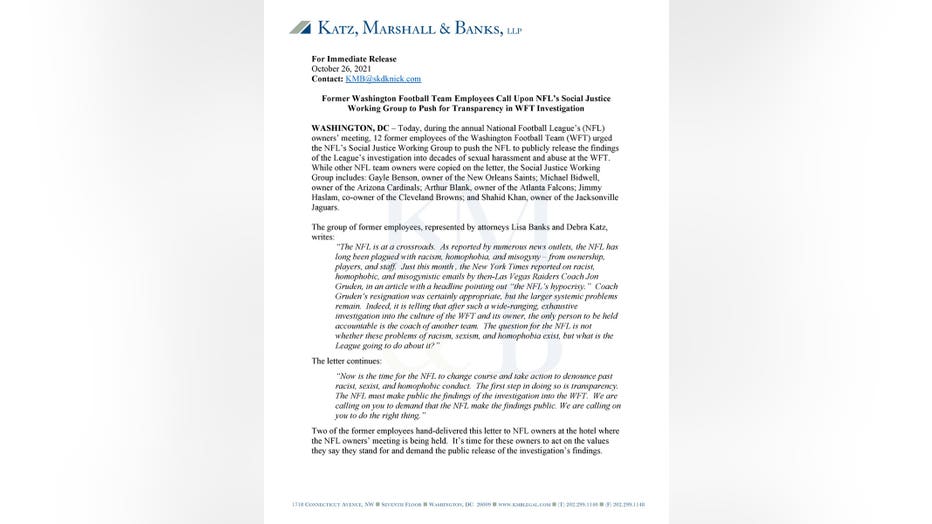