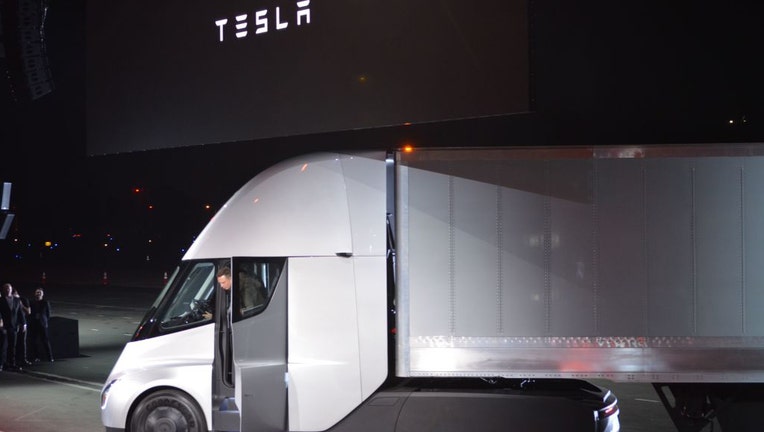 FILE-Tesla Chairman and CEO Elon Musk steps out of the new "Semi" electric Truck during the unveiling for buyers and journalists on November 16, 2017 in Hawthorne, California. (VERONIQUE DUPONT/AFP via Getty Images)

Tesla delivered its first production Semi trucks on Thursday night to PepsiCo for use at its California facilities.

The all-electric tractor debuted as a concept in 2017 with an eye on entering production in 2019, but its development and later the coronavirus pandemic caused the date to be pushed off.

The truck arrives with many of the specifications originally promised, however, including a range of 500 miles per charge fully loaded.

Tesla CEO Elon Musk boasted at the event that it is more powerful than a diesel, and that it can accelerate to 60 mph in 5 seconds unladen and in 20 seconds with a full load, but did not reveal its exact specifications.

The truck uses several off-the-shelf Tesla parts to reduce costs, including a three-motor powertrain derived from the one in the Tesla Model S Plaid. It can cruise along using just one of the motors and engage the other two for added torque when necessary.

Tesla showed a video of a truck operating at its maximum combined weight of 82,000 pounds accelerating up a 6% grade at highway speeds and a time-lapse of one that weighed 81,000 pounds completing a 500-mile trip from Tesla's factory in Fremont, California, to San Diego on a single charge. Electric Semis are allowed to operate at a maximum of 82,000 pounds, rather than the traditional maximum of 80,000 pounds to accommodate the added weight of their batteries.

Tesla has not released the size of the battery pack required to do this, but Elon Musk said after the event on Twitter that the truck operates at an efficiency of 1.7 kilowatt-hours per mile, which would suggest the pack has a capacity of approximately 900 kilowatt-hours or more, given that it had some charge left at the end of the trip.

For comparison, a Tesla Model S Plaid's battery has a capacity of 100 kilowatt-hours. The weight of the battery and the Semi itself were not disclosed, so its cargo carrying capacity compared to a diesel semi remains unknown to the public. Competing electric tractors from Freightliner, Volvo and Nikola all have shorter ranges, but smaller batteries.

That is also the case with the price, which was previously advertised at $180,000 for a 500-mile truck, but removed from Tesla's website. It does, however, say that an operator could save over $200,000 in fuel costs over three years, based on diesel and electricity prices in California, but without providing any further details.

Musk said the truck is built using a new 1,000-volt architecture that will allow it to use a megawatt charger that is about three-times more powerful than current systems and can recharge the battery to 70% in a half-hour. He also said that the upcoming Cybertruck pickup would be compatible with the system.

No mention was made at the event of Tesla's Autopilot or Full Self-Driving systems, but it is equipped with a stability control system programmed to help prevent jackknifing.

PepsiCo reserved 100 Semis after its 2017 reveal and two with the company's livery were at the event. A spokesperson later told Fox News Digital it expects to receive 36 trucks total by the end of December.

Tesla Chair Robyn Denholm said last month that the company could build 100 by the end of 2022, while Elon Musk said during the company's third-quarter earnings call that it is aiming for a production rate of 50,000 annually by 2024.

This story has been updated with additional information from PepsiCo.