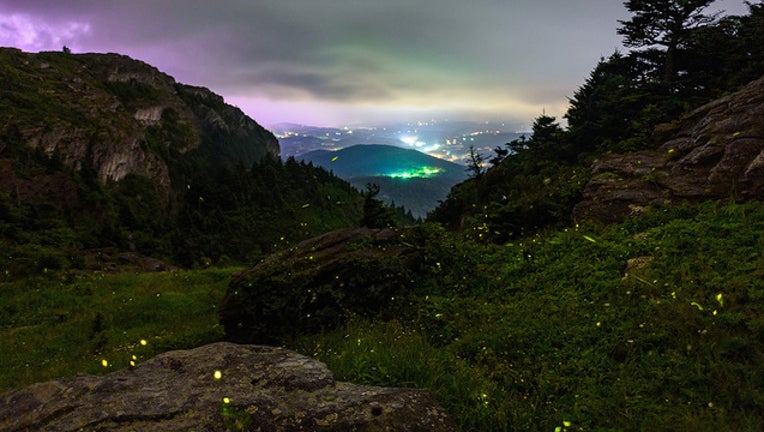 GRANDFATHER MOUNTAIN, N.C. - A new species of firefly has been discovered at Grandfather Mountain, and they do something very different from others: They light up the sky by flashing in unison.

The Linville, N.C. park is officially home to the Photinus carolinus, the only species of firefly in North America that can synchronize their lighting display.

The firefly has been known to reside in the Great Smoky Mountains, where they are a major attraction from May to early June; so popular, in fact, that there are a limited number of tickets for the event. Hopeful spectators have to enter a lottery to witness the phenomenon.

But N.C. State entomologist Dr. Clyde Sorenson found the fireflies during a visit to Grandfather Mountain, giving visitors a new chance to witness the spectacular sight.

"I had the intention to see what kind of fireflies might be around at the high altitude," Sorenson said. "As it got dark, the numbers steadily went up, and between 10 and 10:30 p.m., there were several hundred all around the guest cottage and Woods Walk, flashing synchronously."

Sorenson, along with park officials, are particularly excited, because synchronous behavior is so rare in fireflies.

"There's only a handful of species all around the world that do this," Sorenson says. "Any time people can witness one of these really neat natural history spectacles, it increases their appreciation for the natural world."

With the fireflies now out of season, park staff is working to organize viewing events in which the public can witness the bugs in action.