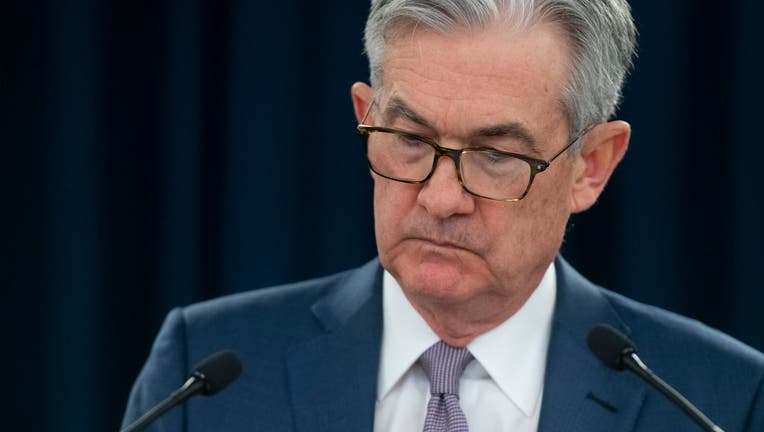 Federal Reserve Chair Jerome H. Powell announces a half percentage point interest rate cut during a speech on March 3, 2020 in Washington, D.C. Powell recently warned of a sustained recession due to the COVID-19 pandemic. (Photo by Mark Makela/Getty

WASHINGTON - Federal Reserve Chairman Jerome Powell issued a grim warning about the U.S. economy's recovery from the coronavirus pandemic: The process could stretch through the end of 2021 — and may hinge on the completion of a successful vaccine.

"This economy will recover...We'll get through this. It may take a while. It may take a period of time. It could stretch through the end of next year," Powell said during a rare televised interview that aired on "60 Minutes" Sunday night. "We really don't know. We hope that it will be shorter than that, but no one really knows."

Although the economy may begin to recover in the second half of 2020 so long as there is not a second wave of the novel coronavirus, Powell said it may not return to pre-crisis levels until a vaccine is delivered as certain sectors like sporting events and theaters struggle to adapt to strict social distancing guidelines.

He appeared to push back against the possibility of a so-called "V-shaped" rebound, noting it was "unlikely" the U.S. will bounce back to pre-crisis levels by the end of the year.

In the two months since the economy came to a near standstill to limit virus spread, more than 36 million Americans have lost their jobs, a rate unseen since the Great Depression. Just three months ago, unemployment sat at a half-century low. The outbreak also has been a catalyst for bankruptcies among small and big businesses alike, and economists have warned of an unprecedented contraction in the nation's GDP in the second quarter, with Powell acknowledging it could "easily" shrink by 30 percent.

The Fed responded to the pandemic by taking a range of extraordinary actions to support the economy, including slashing interest rates to near-zero, purchasing an unlimited amount of Treasurys (a practice known as quantitative easing) and launching crisis-era lending facilities to ensure that credit flows to households and businesses. It has also said it will buy corporate bonds and lend to states and cities.

RELATED: Will you get a second coronavirus stimulus check? Everything we know so far

In the past eight weeks, the Fed has pumped nearly $2.9 trillion into the economy, and its balance sheet has expanded to $7 trillion, a record. But Powell said Fed policymakers may need to take additional action to continue supporting the economy, like enlarging existing lending programs; starting new lending programs "if need be," make policy "even more accommodative," and change their asset purchase strategy via forward guidance.

"We're not out of ammunition by a long shot," he said. "There’s really no limit to what we can do with these lending programs that we have. So there's a lot more we can do to support the economy, and we're committed to doing everything we can as long as we need to."

But Congress may need to take additional action, as well, to avoid long-term damage to the economy, Powell said.

So far, lawmakers have passed four massive stimulus packages totaling nearly $3 trillion to blunt the economic pain from the virus outbreak. That includes the $2.2 trillion CARES Act signed into law at the end of March, which established the Paycheck Protection Program, expanded unemployment benefits by $600 per week and sent one-time payments of up to $1,200 to Americans who earn less than $99,000.

House Democrats on Friday passed a $3 trillion coronavirus relief bill, though it faces a steep path to passage in the Republican-controlled Senate.

"And the question is, will it be enough?" he said. "And I don't think we know the answer to that. It may well be that the Fed has to do more. It may be that Congress has to do more. And the reason we've got to do more is to avoid longer run damage to the economy."

Powell declined to provide specific policies but said measures that help businesses avoid avoidable insolvencies and that keep families solvent could help poise the economy for a “strong recovery.

"People will be able to spend, be able to do things. And that's what we need, to have a strong recovery when it comes," he said.

Powell will likely shed more light on the U.S. economy, and what it's recovery will look like, when he appears before the Senate Banking Committee on Tuesday. But for all the uncertainty about the pandemic, Powell also offered a message of hope.

"I would never bet against the American economy or the American people," he said. "We have a great economy. We have highly industrious people. We have the most dynamic economy in the world. And we're the home of so much of the great technology in the world."

"So in the long run, I would say the U.S. economy will recover. We'll get back to the place we were in February; we'll get to an even better place than that. I'm highly confident of that. And it won't take that long to get there. It will take some time to get there. So I think we're going to need to help each other through this. And we will."