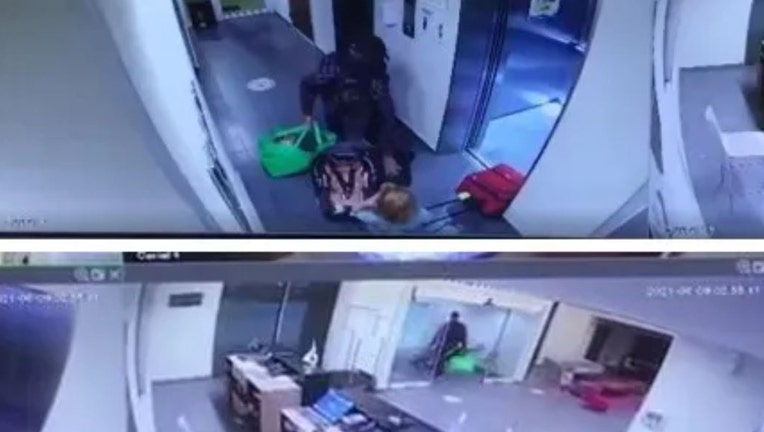 LOS ANGELES - Matthew Taylor Coleman, the owner of a California surfing school in Santa Barbara, was charged Wednesday after confessing to using a spearfishing gun to murder his two children in Mexico, citing QAnon conspiracy theories that convinced him "his children were going to grow into monsters," according to an FBI affidavit.

Coleman, 40, was arrested after the bodies of his 2-year-old son and 10-month-old daughter were found Monday morning by a farmworker at a ranch near Rosarito in Baja California, said Hiram Sanchez, Baja California’s attorney general.

According to court documents, Coleman allegedly said that "he believed his children were going to grow into monsters so he had to kill them."

The girl had been stabbed 12 times, and the boy was stabbed 17 times, Sanchez said.

Coleman is currently facing a federal charge of the foreign murder of U.S. nationals, the U.S. attorney's office said in a statement.

SHARED: SoCal dad who killed his 2 kids with spear gun in Mexico was QAnon-obsessed, FBI says

Coleman's wife reported to Santa Barbara police on Saturday that her husband had left with the children in the family's van, she didn't know where they were going, and he hadn't answered her text messages.

Coleman's wife said she didn't believe the children were in any danger, that she hadn't had any problems with Coleman, and "they did not have any sort of argument" before he left, according to the court affidavit.

An iPhone-finding application placed Coleman's phone in Rosarito on Sunday, and on Monday it was traced to an area of Mexico near the San Ysidro Port of Entry in San Diego, according to the affidavit.

Coleman was detained at the border checkpoint, where during an interview with an FBI agent "he explained that he was enlightened by QAnon and Illuminati conspiracy theories and was receiving visions and signs revealing that his wife, A.C., possessed serpent DNA and had passed it on to his children," according to the affidavit.

Coleman runs the Lovewater Surf Co., a surfing school based in Santa Barbara, according to the company’s website.

This tragic news comes after the FBI and Department of Homeland Security in June warned of increased violent actions by QAnon supporters to the United States.

"Even before the horrific January 6th insurrection, QAnon supporters spread disinformation that amplified hatred and violence and threatened our democratic institutions. This assessment raises awareness for our government and the general public to the evolving threat posed by domestic violent extremists’ adherence to QAnon’s dangerous principles and further shows the urgent need for an independent January 6th commission," said Majority Leader Schumer.