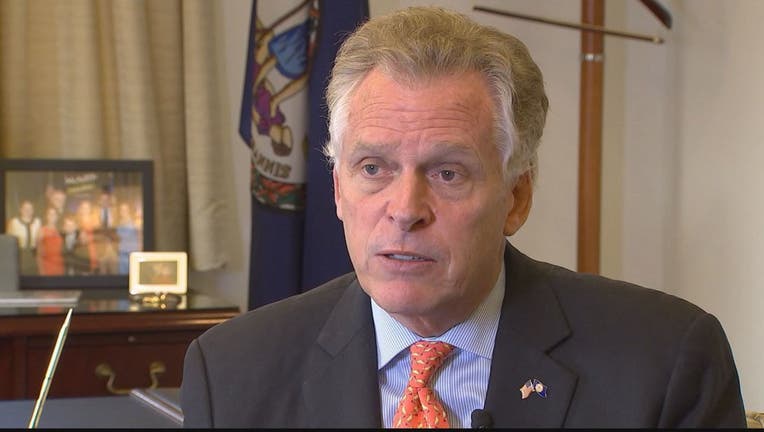 Former Virginia Governor Terry McAuliffe during a 2017 interview with Fox 5.

RICHMOND, Va. - As former Virginia Gov. Terry McAuliffe travels the country promoting his new book about a deadly white nationalist rally, others involved in the mayhem nearly two years ago are pushing back at his characterization of the events.

Charlottesville's former mayor said the book "blames everyone else," and the American Civil Liberties Union of Virginia called it an effort to "pass the buck." Some of the anti-racism protesters injured during a car attack after the rally confronted McAuliffe at a book talk in Washington on Thursday, accusing him of supporting a police response that was widely criticized as too passive.

For his part, McAuliffe said the book isn't about assigning blame, it's about remembering a seminal moment in the nation's history and taking steps to make sure nothing similar happens again.

"Racism is alive and well in this county, it exists today in our country, and we need to do something about it," McAuliffe, a former Democratic National Committee chairman who in April ruled out a 2020 presidential run, said in an interview Friday. "That's the overarching theme of the book."

"Beyond Charlottesville: Taking a Stand Against White Nationalism" offers the governor's account of preparations ahead of the Aug. 12, 2017 rally, which drew a loosely connected mix of far-right extremists for the largest gathering of its kind in at least a decade. The Associated Press received an advance copy of the book, which went on sale Tuesday.

It also describes his and other state officials' roles in managing the events as they unfolded — including his interaction with President Donald Trump and his reaction to the deaths of two state troopers who had been monitoring the rally in a helicopter that crashed — plus more general reflections about his time in office and about how to move forward and address the legacies of racism.

Large crowds of heavily armed, mostly young, white men chanting racist slurs converged in a downtown park Aug. 12, and hundreds of counterprotesters showed up, too. Street fighting exploded before the scheduled event could begin and went on for nearly an hour in view of police until authorities forced the crowd to disperse.

As counterprotesters were marching peacefully through a downtown street, an avowed white supremacist who kept a photo of Adolf Hitler on his bedside table plowed his car into them. Heather Heyer , a 32-year-old paralegal, was killed and dozens more were injured.

A scathing independent report by a former federal prosecutor released several months later found problems at the state and local level, including a lack of planning, poor communication and a law enforcement plan that put officer safety over public safety.

McAuliffe, who doesn't mention that report, writes in the book that he knew "without a doubt that we'd done everything we could at the state level to prepare" ahead of the rally but that the city "did itself no favors."

He wrote that his staff didn't see a sense of urgency from local officials, who he said weren't taking necessary precautions. He called the city's permitting process "pathetic," and said it boxed authorities "into a corner."

Former Charlottesville Mayor Mike Signer, now a city councilman, said he read the book for the first time this week.

"Instead of evenly examining all of the state's decisions, including its mistakes, so we can learn and grow, the book instead blames everyone else, while making significant errors in the process," Signer said in the statement.

At a book talk in Washington Thursday, several women who were injured in the car attack addressed McAuliffe, challenging his characterization of the police response as dozens of attendees looked on. They asked why part of the proceeds had been pledged to benefit the families of fallen state police officers but not to the survivors of the car attack.

WAMU reported the 20-minute exchange became heated, with one protester moving toward McAuliffe and then chanting, "Cops and the Klan go hand in hand."

The crowd eventually began to boo the women, who were escorted out, according to The Washington Post .

McAuliffe said Friday the protesters were entitled to their opinions and noted that he had agreed to meet with the victims. He also agreed during the event to direct part of the book proceeds to support survivors of the car attack, many of whom have faced significant medical bills.

One benefit of Charlottesville is it reignited conversations about racism, McAuliffe said, adding: "Get up and do something about it. That is what I hope the takeaway will be."

In addition to the many state officials quoted in the book is Susan Bro, Heyer's mother. Bro said Friday that she sent her comments by email to McAuliffe "and others" and that she had reviewed the manuscript to make sure everything that pertained to her daughter was correct.

Bro said she thinks McAuliffe sees himself as a hero in the retelling of the events, a tendency she called typical human nature.

"It's always interesting how everybody has a different remembrance ... of the day. I always say the truth lies somewhere in the midst of all that," Bro said.