The Trump administration tonight is considering relaxing coronavirus guidelines to make it easier for Americans who have been exposed to coronavirus - but have no symptoms - to return to work.

NEW YORK (AP) - Even as coronavirus deaths mount across Europe, New York and other hot spots, the U.S. and other governments are beginning to envision an exit strategy and contemplating a staggered and carefully calibrated relaxation of the restrictions designed to curb the scourge. 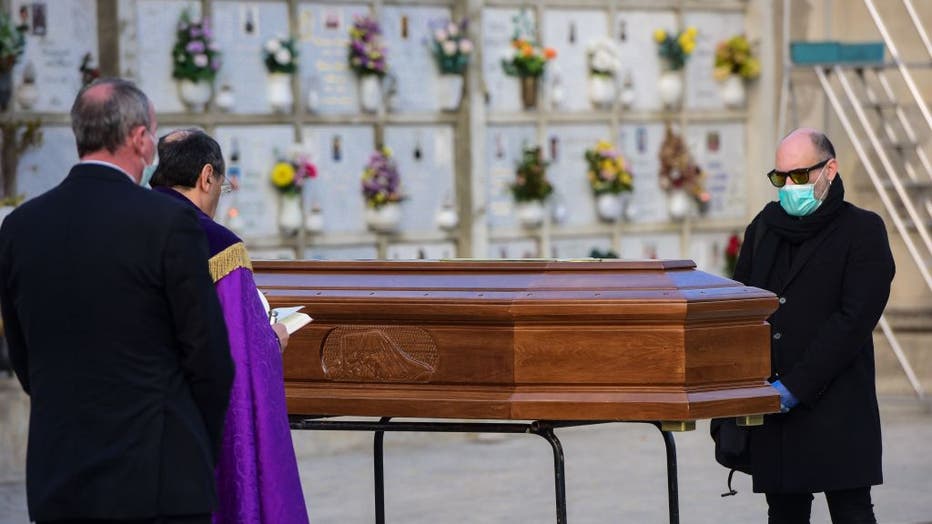 A man wearing a face mask stands by the coffin of his mother during a funeral service in the closed cemetery of Seriate, near Bergamo, Lombardy, on March 20, 2020 during the country's lockdown aimed at stopping the spread of the COVID-19 pandemic. (Photo by Piero Cruciatti / AFP) (Photo by PIERO CRUCIATTI/AFP via Getty Images)

At the same time, politicians and health officials emphatically warn that while deaths, hospitalizations and new infections may be leveling off in places like Italy and Spain, and even New York has seen encouraging signs amid the gloom, the crisis is far from over, and a catastrophic second wave could hit if countries let their guard down too soon.

“We are flattening the curve because we are rigorous about social distancing," New York Gov. Andrew Cuomo said. "But it’s not a time to be complacent. It’s not a time to do anything different than we’ve been doing.”

In a sharp reminder of the danger, New York state on Wednesday recorded its highest one-day increase in deaths, 779, for an overall death toll of almost 6,300.

“The bad news is actually terrible,” Cuomo lamented. Still, the governor said that hospitalizations are decreasing and that many of those now dying fell ill in the outbreak's earlier stages.

In Britain, meanwhile, Prime Minister Boris Johnson spent a second night in intensive care but was improving and sitting up in bed, authorities said. 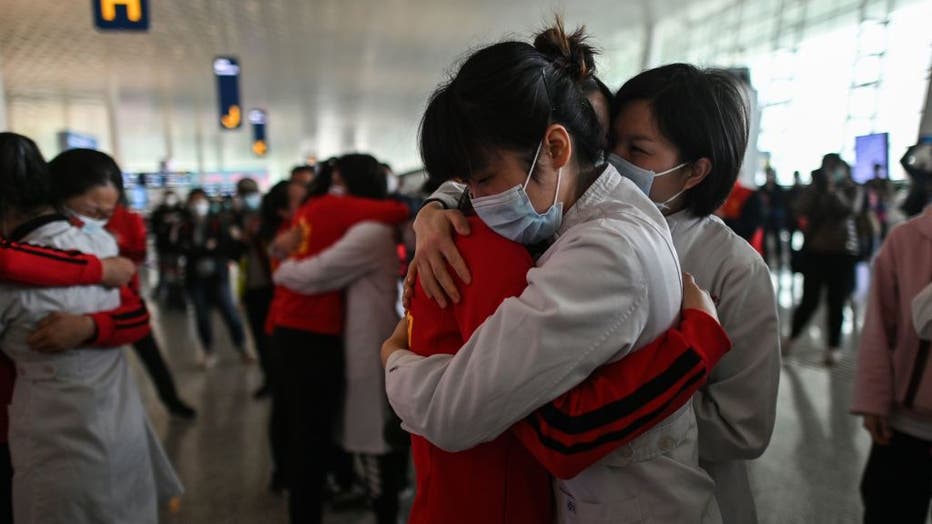 Medical staff from Jilin Province (in red) hug nurses from Wuhan after working together during the COVID-19 coronavirus outbreak during a ceremony before leaving as Tianhe Airport is reopened in Wuhan in China's central Hubei province on April 8, 202

In China, the lockdown against Wuhan, the industrial city of 11 million where the global pandemic began, was lifted after 76 days, allowing people to come and go. The reopening was seen as a positive sign but also reflected the communist state's extensive surveillance apparatus and powers of coercion.

Wuhan residents will have to use a smartphone app showing that they are healthy and have not been in recent contact with anyone confirmed to have the virus. Even then, schools remain closed, people are still checked for fever when they enter buildings, and masks are strongly encouraged.

In the U.S., with about 13,000 deaths and 400,000 infections, the Centers for Disease Control and Prevention was considering changing self-isolation guidelines to make it easier for those exposed to someone with the virus to return to work if they have no symptoms.

Under the proposed guidance, aimed at workers in critical fields, such people would be allowed back on the job if they take their temperature twice a day and wear a mask, said a person who was familiar with the draft but was not authorized to discuss it and spoke on condition of anonymity.

Dr. Anthony Fauci, the nation’s top infectious-diseases expert, said that the Trump administration has been working on plans to eventually reopen the country and restart the economy amid “glimmers of hope” that social distancing is working to stop the virus’s spread.

“That doesn’t mean we’re going to do it right now,” he said on Fox News. “But it means we need to be prepared to ease into that. And there’s a lot of activity going on.”

The U.S. is seeing burgeoning hot spots in such places as Washington, D.C., Louisiana, Chicago, Detroit, Colorado and Pennsylvania. The New York metropolitan area, which includes northern New Jersey, Long Island and lower Connecticut, accounts for about half of all virus deaths in the U.S. 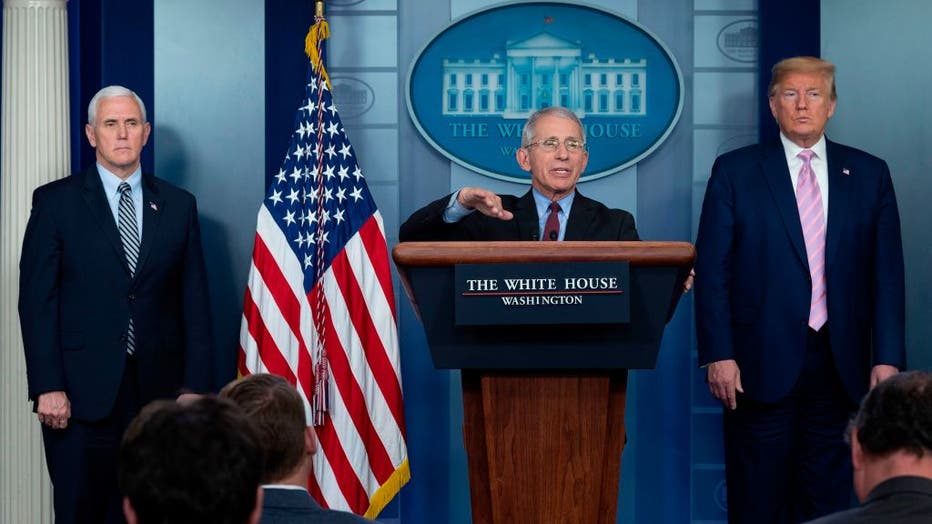 US President Donald Trump looks on as Director of the National Institute of Allergy and Infectious Diseases Dr. Anthony Fauci speaks during the daily briefing on the novel coronavirus, COVID-19, at the White House on April 4, 2020, in Washington, DC.

In Europe, Italian Premier Giuseppe Conte is expected to announce in the coming days how long the country’s lockdown will remain in place amid expectations that some restrictions could be eased. Discussions are focused first on opening more of the country's industries.

Proposals being floated in Italy include the issuing of immunity certificates, which would require antibody blood tests, and allowing younger workers to return first, as they show less vulnerability to the virus.

Italy, the hardest-hit country, recorded its biggest one-day jump yet in people counted as recovered and had its smallest one-day increase in deaths in more than a month. Nearly 18,000 have died there.

In Spain, which has tallied more than 14,000 dead, Budget Minister María Jesús Montero said that Spaniards will progressively recover their “normal life” from April 26 onwards but warned that the “de-escalation” of the lockdown will be “very orderly to avoid a return to the contagion.”

The government has been tight-lipped so far about what measures could be in place once the confinement is relaxed, stressing that they will be dictated by experts

Without giving specifics, French authorities have likewise begun to speak openly of planning the end of the country's confinement period, which is set to expire April 15 but will be extended, according to the president's office. The virus has claimed more than 10,000 lives in France.

France’s Delfraissy, who leads the scientific council advising the president, said three things are necessary for people to start leaving home regularly: intensive care beds need to be freed up, the spread of the virus must slow, and there have to be multiple tests to see if people are or have been infected and to trace them. He said the French will also need to wear masks in public.

British government officials, beset with a rising death toll of more than 7,000, said there is little chance the nationwide lockdown there will be eased when its current period ends next week.

The European Union expressed privacy concerns about virus-tracking mobile apps that governments are developing or deploying. Such apps use smartphone data to track virus carriers’ movements in order to alert people they may have infected. The EU said the technology raises questions of “fundamental rights and freedoms.”

The desire to get back to normal is driven in part by the damage to world economies.

The Bank of France said the French economy has entered recession, with an estimated 6% drop in the first quarter compared with the previous three months, while Germany, Europe’s economic powerhouse, is also facing a deep recession. Expert said its economy will shrink 4.2% this year.

Japan, the world’s third-largest economy, could contract by a record 25% this quarter, the highest since gross domestic product began to be tracked in 1955.

Worldwide, more than 1.4 million people have been confirmed infected and over 80,000 have died, according to Johns Hopkins University. The true numbers are almost certainly much higher, because of limited testing, different rules for counting the dead and concealment by some governments.

For most, the virus causes mild to moderate symptoms such as fever and cough. But for some older adults and the infirm, it can cause pneumonia and death. Over 300,000 people have recovered.

Follow AP news coverage of the coronavirus pandemic at http://apnews.com/VirusOutbreak and https://apnews.com/UnderstandingtheOutbreak