About 3 feet of brown flood water filled up a doggy daycare and grooming business in D.C. Wednesday leaving some employees trapped inside for a period of time.

WASHINGTON - A doggy daycare and grooming business in Northeast is drying out after severe flooding Wednesday.

District Dogs on the 600 block of Rhode Island Avenue saw around three feet of brown flood water outside the business as rain poured down.

Owner Jacob Hensley said he had about 50 dogs at his business at the time. The front door was sealed tight, and he says they have good drainage, but a few inches of water still seeped inside.

"Two drains were the wrong size, so some water came up through the drains. That flooded," Hensley said. "We immediately moved the dogs to our dryest spot, our private suites in the back so all of our dogs are safe. But we’re going to damage control. I called the flood tech team, they’re here to dry out the space for the second time in less than a week." 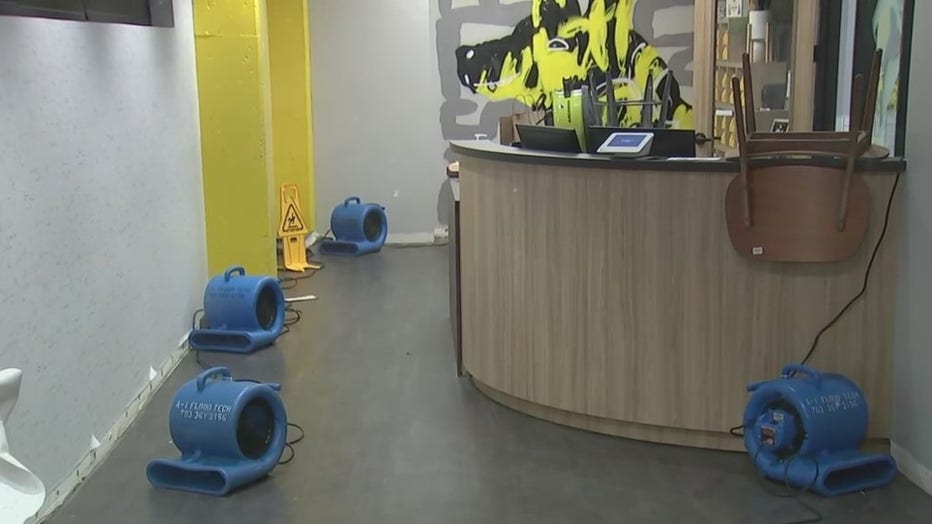 He said the business has flooded three times in the last three weeks. District Dogs just opened in May and Hensley says there was never any flooding during construction last year. He’s calling on the city to help find a solution, saying this is not sustainable.

"I’m just trying to keep the morale high. But that’s not really possible when three times in three weeks we’re flooded, and they’re cleaning up a mess," he said. "It’s not their job, they’re here to take care of the dogs."