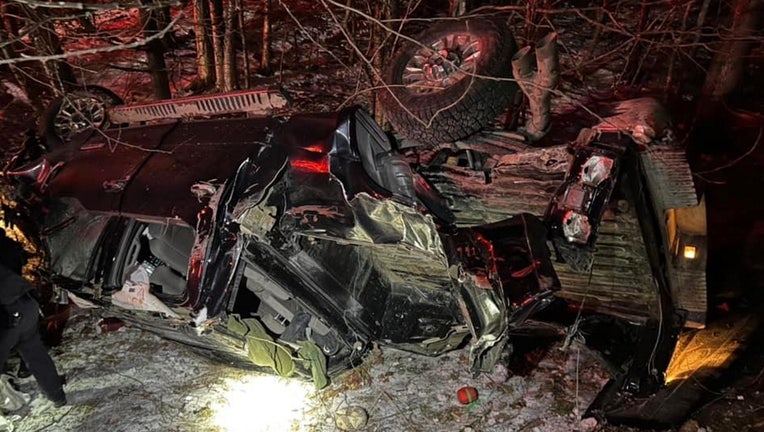 Tinsley, a German Shepherd, ran from the scene of the rollover crash and got the attention of police in order to lead them back to her owner. (Photo: New Hampshire State Police)

LEBANON, N.H. - A German shepherd named Tinsley, first thought to be a lost dog, successfully led New Hampshire state police to the site of her owner’s rollover crash just across the state line in Vermont.

Both the vehicle’s occupants were seriously hurt, but thanks to Tinsley’s dogged efforts they quickly received medical assistance once officers discovered the truck, which went off the road near a Vermont interstate junction, WMUR-TV reported Tuesday.

"The dog was trying to show them something," said Lt. Daniel Baldassarre of the New Hampshire State Police. "[She] kept trying to get away from them but didn’t run away totally.

"It was kind of, ‘Follow me. Follow me.’ And they did that and you know, to their surprise to see the guardrail damaged and to look down to where the dog is looking at, it’s just, they were almost in disbelief," he said.

A New Hampshire state trooper and police from the nearby city of Lebanon responded to the crash site just across the state line in Vermont late Monday. Vermont State Police arrived on-scene shortly afterward.

"We’ve had, you know, a lot of amazing stories with our trained K-9s and stuff, but not for just a household pet to lead you down that road and play a role in saving some lives," Lebanon, N.H. Police Chief Phillip Roberts told WBTS.

Vermont State Police said they found the driver and passenger both laying in the snow next to the totaled truck, with Tinsley standing by her owner, the driver.

Investigators said the driver sustained minor injuries, but they determined he was intoxicated at the time of the rollover. He was charged with DUI.