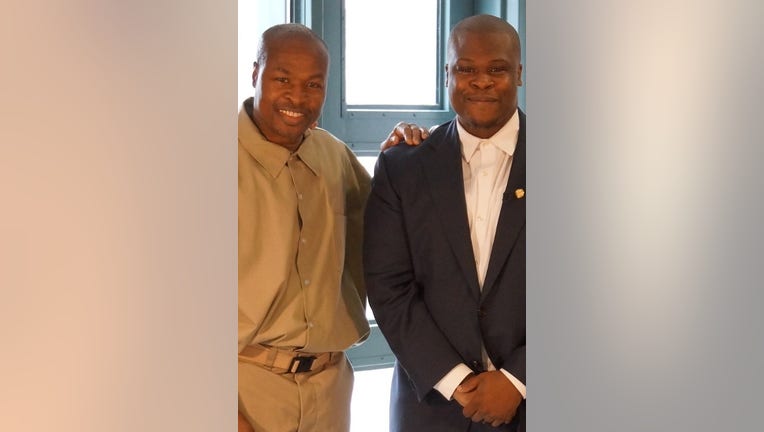 Tony Lewis Jr. is calling on Pres. Biden to release his father from prison after 32 years of incarceration (Provided photo).

WASHINGTON - President Joe Biden was criticized on the campaign trail for his 1994 crime bill that activists say led to the disproportionate mass incarceration of Black and brown Americans.

Now, a local D.C. man is calling on the President Biden to help change his legacy by freeing his father: a man connected to one of the District’s most notorious busted drug rings back in the 1980s.

They rallied at Black Lives Matter Plaza, where Lewis Jr. says his father was able to call in and publicly apologize to those in attendance.

"He’s missed the majority of my life and now he’s missed all of my girls’ – my daughter’s life. You know what I’m saying? He really wants to be a grandad," Lewis Jr. told FOX 5 DC. "He doesn’t want for them to have to continue to visit him in prison. It’s just so much that we’ve been through in this 32 years."

For Lewis Jr., that is just over three decades that his father, an almost 59-year-old Tony Lewis, has spentbehind bars.

Lewis Sr. was sentenced when his son was around 8 or 9 years old and he was around 27 years old, according to his son.

Lewis Jr. is serving time for his role in a notorious cocaine drug ring that reportedly involved violence and guns.

In February, The Washington Post reported that the kingpin of the operation, Rayful Edmond III, had his sentence reduced from life to 20 years for working with the government.

Lewis Jr. says his dad is the only one out of the 29-person conspiracy still behind bars, facing life without parole.

"It’s second chance month and the White House put out proclamation about the importance of second chances and I think my father, again, should be the poster child," Lewis Jr. said. "He fits all of the criteria of -- any eligibility criteria you can think of. Two minor infractions since being incarcerated for 32 years, which is pretty unheard of."

Lewis Jr., who works for the Court Services and Offender Supervision Agency (CSOSA), told FOX 5 his father was instrumental in steering his life toward being an advocate.

Lewis says the two have worked together to support the children of incarcerated parents  and work with young men on how to get into the right mindset for re-entry, while at the Federal Correctional Institution at Cumberland, Maryland.

"He has a non-violent drug offense, right? And in my work as a re-entry professional, I’m able to work with people who have committed the entire gambit, right? From child molestation to rape to homicide – and they’re in the community," Lewis Jr.  said. "I’m not judging that. What I’m saying is, 'how can other charges be worthy of a second chance and my father’s charge not be?'"

The District employee says his father does not deserve to die in prison and feels their work on rehabilitating others should also count as his father’s repayment to society.

Lewis Jr. is not only calling on the President to take action, but for the Biden Administration to create a robust clemency program to reunite families like his own.