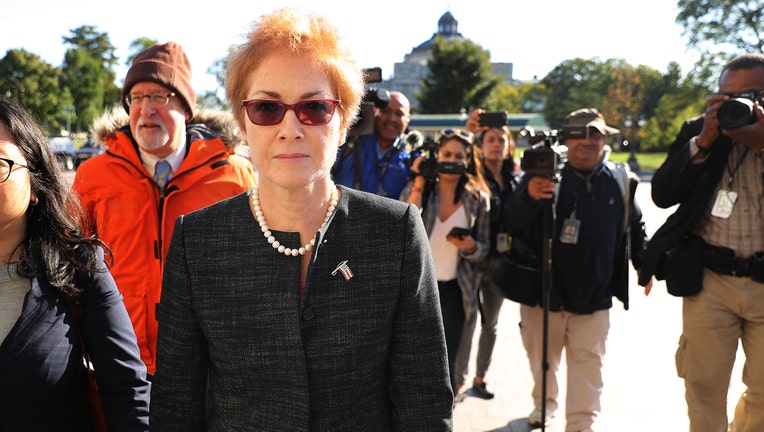 WASHINGTON - The former U.S. ambassador to Ukraine watched in disbelief as her reputation was publicly sullied in a slow-burning campaign to discredit her. She was unceremoniously ousted from her job even as her boss assured her she had done nothing wrong.

On Friday, diplomat Marie Yovanovitch gets her turn to tell the public how she feels about her treatment by the Trump administration.

Yovanovitch, 60, is a career foreign service officer with a solid reputation who suddenly found herself labeled “bad news” by President Donald Trump over the summer. She will be in the spotlight as the lone witness when public impeachment hearings resume for a second day.

She’s already laid out her story for legislators in private.

“You’re going to think that I’m incredibly naive,” Yovanovitch told House impeachment investigators at a marathon, closed-door deposition hearing in October. “But I couldn’t imagine all the things that have happened over the last six or seven months. I just couldn’t imagine it.”

Yovanovitch was pushed out of her job in late April, so it’s unlikely she can offer much of substance about the central allegations against Trump. Democrats leading the impeachment inquiry contend Trump pressured Ukraine’s newly elected president, Volodymyr Zelenskiy, to investigate former Vice President Joe Biden and his son and withheld much-needed U.S. military aid to nudge the Ukrainian leader to do his bidding.

Instead, Democratic lawmakers are expected to point to the circumstances of her ouster as they try to make their case that Trump, with the help of his personal attorney Rudy Giuliani, mounted an inappropriate pressure campaign to enlist Zelenskiy in the effort to damage Democratic political rival Biden.

“Giuliani also conducted a smear campaign against the U.S. Ambassador to Ukraine Marie Yovanovitch,” House Intelligence Committee Chairman Adam Schiff said at the first public impeachment hearing earlier this week. “A senior State Department official told her that although she had done nothing wrong, President Trump had lost confidence in her.”

Trump was convinced that Yovanovitch was a rogue actor who held a political bias against him, according to a rough transcript of the July 25 call between the president and Zelenskiy.

She was recalled from Kyiv by Trump months before the call in which Trump asked Zelenskiy to do him a “favor” and look into Biden and his son Hunter’s dealings in Ukraine. At the time of the call, the Trump administration had put a hold on nearly $400 million in military aid to Ukraine and Zelenskiy and his team were trying to get Trump to commit to a date for a White House meeting.

The intelligence community whistleblower who spurred the House investigation cited Yovanovitch’s ouster as one in a series of events that amounted to an abuse of power by the president.

Yovanovitch, a State Department employee for 33 years who also led U.S. embassies in Kyrgyzstan and Armenia, is well known in diplomatic circles for her measured demeanor and diligence in representing both Republican and Democratic administrations, according to former colleagues.

Colleagues, in interviews and closed-door depositions, expressed anger and concern about the effort to oust Yovanovitch, who testified that she was apparently seen as an obstacle to the business interests of Trump’s allies.

“Mr. Giuliani was almost unmissable starting in mid-March,” said George Kent, a deputy assistant secretary of state. “As the news campaign, or campaign of slander, against not only Ambassador Yovanovitch unfolded ... he was on TV, his Twitter feed ramped up and it was all focused on Ukraine.”

After the ambassador’s recall, Giuliani told Ukrainian journalists that Yovanovitch was pulled from Kyiv because she was part of efforts against the president. The former New York mayor also has said that he told the president there were concerns among Trump supporters that she had displayed anti-Trump bias in private conversations.

Trump didn’t mince words about his disdain for Yovanovitch in his July call with Zelenskiy.

"The former ambassador from the United States, the woman, was bad news," Trump said, according to the rough transcript released by the White House. "She's going to go through some things."

Yovanovitch said she was later told that the State Department had been under pressure from Trump to remove her from Ukraine since the summer of 2018.

In her own deposition session last month, Yovanovitch showed flickers of raw emotion about her firing and described watching from a distance as she faced critical coverage in conservative media outlets.

John Solomon, a columnist for the Washington news outlet The Hill, published a March interview with Yuriy Lutsenko, a former prosecutor general in Ukraine. Lutsenko claimed that the ambassador had given him a “do not prosecute” list—an accusation both she and State denied. Lutsenko himself later backtracked.

Around the same time in late March, the president’s eldest son, Donald Trump Jr., posted a tweet referring to her as a “joker,” and linked to an article from the conservative website Daily Wire that detailed a growing call for Yovanovitch’s ouster. Fox News commentators weighed in and questioned her loyalty to the president.

Yovanovitch raised concerns about the U.S. media reports with Gordon Sondland, the U.S. ambassador to the European Union. In response, Sondland encouraged her to tweet her support for Trump on social media.

“He said, ‘You know, you need to go big or go home,'” she recalled. “‘You need to, you know, tweet out there that you support the president.’”

The advice floored Yovanovitch, who like most career diplomats who have served both Republican and Democratic administrations, try to avoid even the scent of partisanship.

“I just didn't see that there would be any advantage to publicly taking on a fight with those who were criticizing me in the United States,” she said.

Now Yovanovitch, hardly a marquee name in Washington, finds herself thrust into the spotlight of just the fourth impeachment inquiry in U.S. history.

Nancy McEldowney, a former U.S. ambassador to Bulgaria who has known Yovanovitch for three decades, said the accusations levied by Trump and Giuliani don’t add up with the professional envoy whose focus throughout her career has remained on “serving American national interests and supporting the people around her.”