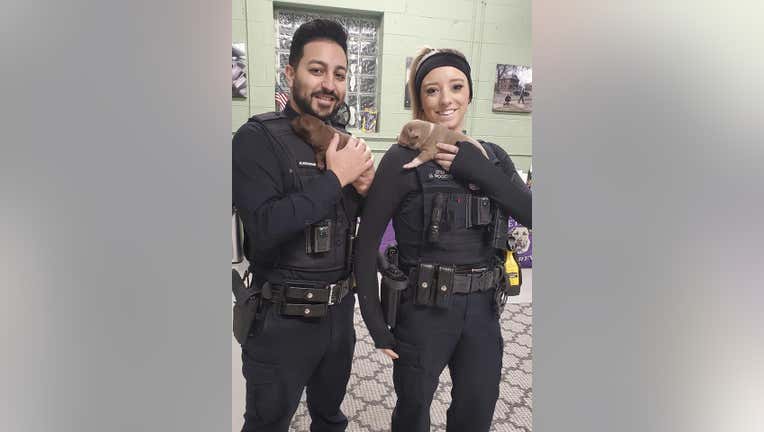 Around 5 p.m., two officers with the city’s 11th Precinct, identified as H. Kourani and G. Rogers, were called to respond to a report of a "vicious dog" in the area. (Detroit Police/Detroit Pit Crew Dog Rescue)

DETROIT (FOX NEWS) - It was the day after Christmas, at an abandoned house, and something seemed off, Detroit police have announced.

A malnourished new mother was scavenging for food outside the vacant home, with her two young puppies inside, including once who’d gotten its neck tied up in a mattress spring as temperatures were expected to drop below freezing Sunday.

Around 5 p.m., two officers with the city’s 11th Precinct, identified as H. Kourani and G. Rogers, were called to respond to a report of a "vicious dog" in the area.

But the dog they found was "nowhere near that," Kourani told Fox News Digital. She was friendly and noticeably underweight. However, she did look like she’d recently given birth.

"Their stomachs and their mammary glands get very swollen and enlarged because they're filled with their milk for their puppies," Rogers told Fox News Digital. "So it was something I immediately recognized."

They first worked to gain the mother’s trust, feeding her treats until she warmed up to them.

"I generally always keep bags of dog treats in my car and our police car, so I kind of just worked my way up on the porch, getting closer and closer with the treats," she said. "And she was obviously very hungry. So she was taking them from me, and she finally was taking them out of my hand after about 30 minutes of me trying to get through to her. And after that, she started to trust us a little bit more."

Once the officers had earned her trust, they could go inside and look for the puppies without the mother perceiving them as a threat. 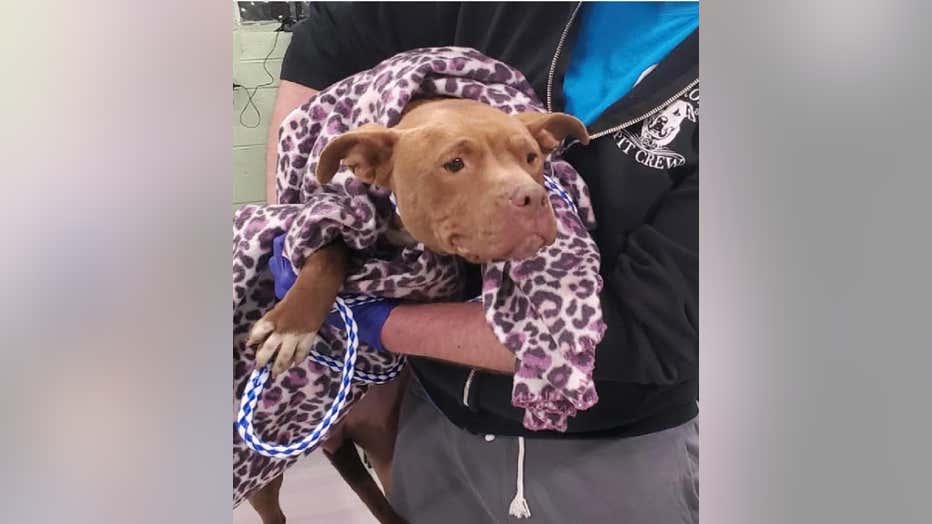 "As soon as we turned that first corner into the living room, we saw a tiny brown puppy laying on top of a beat-up mattress," Kourani said.

That one, rescuers later told Fox News Digital, is a girl. After the officers picked him up, they found her brother inside the mattress, caught up in a spring with the coil around his neck, Rogers said. But she didn’t have a knife or pliers handy.

"I just used all my force to break it off his neck," she said. "He did whimper a little bit once I got it off, but I think that was a sense of relief."

The officers said a veterinarian told them the puppies likely wouldn’t have survived the night if they hadn’t been rescued.

"Whether it’s an animal life or human life, we’re always going to do our best to try to protect and preserve it as much as possible," Kourani said.

Rogers said she’s an experienced animal rescuer, volunteering for rescues when she was younger and adopting her own dog from the Michigan Humane Society.

"I don’t know if it’s a blessing, but my precinct calls me the dog whisperer because I’ve always had a passion for dogs," she said.

Rescuers have since named the mother Jingles and say she looks to be about 1 year old and underfed, but otherwise healthy, according to Theresa Sumpter, the executive director of the nonprofit Detroit Pit Crew Dog Rescue, which is now taking care of the dogs until they’re ready to go to a foster home.

"Her body condition was very bad when we got her, so she definitely needs to put on some weight," Sumpter told Fox News Digital Tuesday. "But she seemed otherwise healthy."

The puppies, which have not yet received names, are about two or three weeks old, Sumpter said. 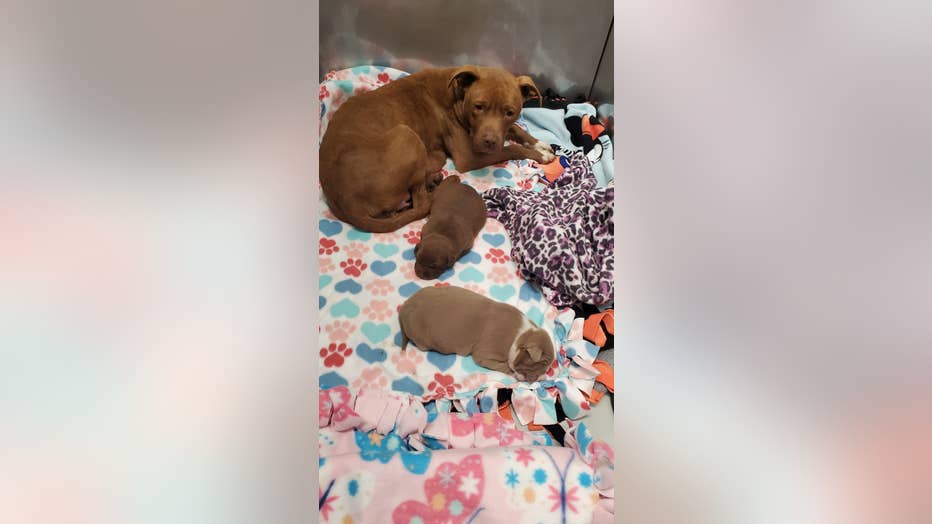 The rescues are doing OK, according to authorities, and can be sent to a foster home in the next few days. (Detroit Police/Detroit Pit Crew Dog Rescue)

They need to remain with their mother until around eight weeks old, she said, in order to properly socialize and grow. Then the rescue will try and find them adoptive homes.

Detroit Pit Crew’s in-house veterinarian is expected to give the mother another checkup on Monday. The group is also running an online fundraiser for the dogs that’s attracted about $1,000 in donations so far.

The Detroit rescue happened just hours after officers in Tulsa, Oklahoma, rescued and adopted a litter of puppies abandoned in a zipped-up duffel bag left on a QuikTrip convenience store county on Christmas night.