A Delta flight from Atlanta to Los Angeles blew out two tires when it landed at Los Angeles International Airport on Tuesday afternoon.

LOS ANGELES - A Delta flight from Atlanta to Los Angeles blew out two tires when it landed at Los Angeles International Airport on Tuesday afternoon.

Delta flight 515 took off from Hartsfield-Jackson Atlanta International Airport shortly after noon Eastern and was heading to LAX when a call came in of an airplane emergency shortly after 1 p.m. Pacific, according to the Los Angeles Fire Department. The flight was 55 minutes late taking off and was about shave off about 30 minutes during the flight, according to flightaware.com.

Passengers of the flight took to Twitter to describe the flight.

"We start our short final onto the runway. We touchdown (maybe a little fast) when all of a sudden POW BAM right landing gear fumbles the bag and we pop 2 tires on the right," Sara Margarett posted on her Twitter account. "Everyone freaks out and we skidded to a stop somewhere between hell and a runway." 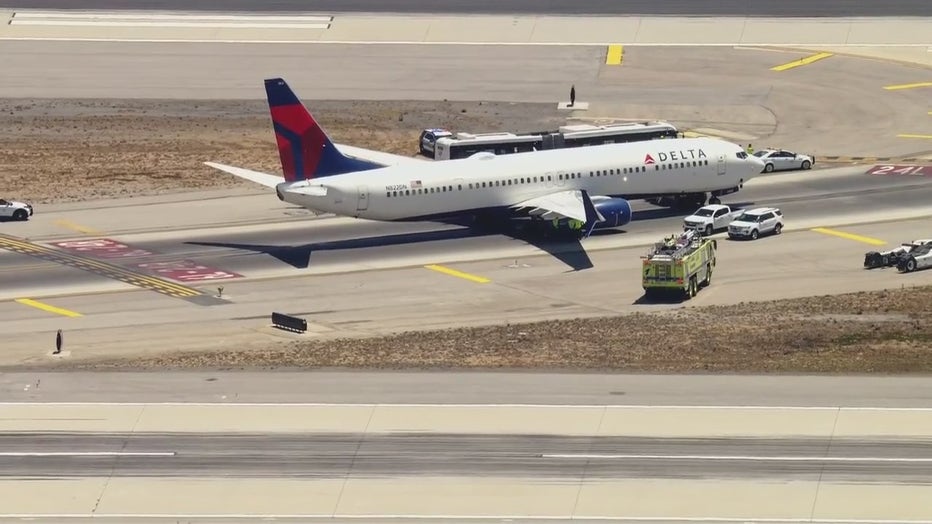 Passengers spent at least an hour, possibly two on the ground in Los Angeles as crews tried to make quick repairs.

Eventually, stairs were brought over to the plane and they were able to disembark.

Fire crews were standing by nearby, but according to LAFD, there had not yet been any medical or fire problems.

Later Tuesday, a Delta spokesperson released the following statement: "Thanks to the flight crews’ handling during the landing process, Delta flight 515 operating from Atlanta arrived safely and came to rest on the taxiway after a possible issue with some of its tires at Los Angeles International Airport. Customers were deplaned and bused to the terminal. We sincerely apologize to our customers for the inconvenience."