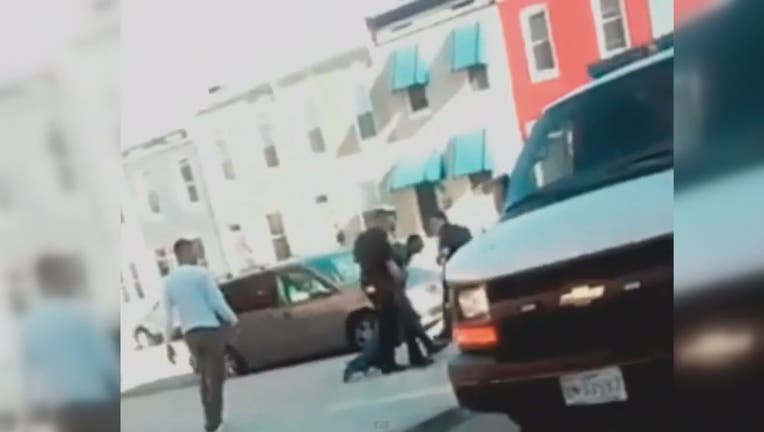 By JESSICA GRESKO
The Associated Press

Here is a look at each of the six officers.

Goodson was the driver of the van that transported Freddie Gray, and he faces the most serious charges. Mosby said Friday that Goodson repeatedly failed — a total of five times — to seatbelt Gray in the transport vehicle. Overall, Goodson faces six charges, including "second-degree depraved heart murder," which carries a potential 30-year sentence.

Goodson, 45, has been on the force since 1999. Friends describe him as a family man who likes to watch football and works part time as an auto mechanic at a shop specializing in Saabs. With help, he restored a green Saab convertible, a car one friend says he only takes out a few times a year. He wasn't scheduled to work on the day Gray was arrested but had been asked to work overtime, friends said.

A friend who worked with him as a mechanic said Goodson had hoped to retire in several years.

An obituary for his mother published in the Baltimore Sun in 2012 says his grandfather was a police officer.

Rice was on bike patrol when he made eye contact with Freddie Gray on a Baltimore street April 12. Gray ran, and Rice pursued him. Bike patrol officers Garrett Miller and Edward Nero joined the pursuit.

Rice, 41, is the most senior officer to be charged. He joined the police force in 1997 and was promoted to lieutenant in 2011, police said. Records obtained by The Associated Press from a sheriff's department and court show he was hospitalized in April 2012 following concerns about his mental health. Worries about his stability led deputies to confiscate both his official and personal guns, and his commanding officer was called. It was not immediately clear whether or when all of Rice's guns were returned.

Gray surrendered to Miller, 26, and Nero, 29. Miller and Nero handcuffed Gray and put him on the ground. Gray told the officers that he couldn't breathe and requested an inhaler, Mosby said. The two officers, both of whom joined the police force in 2012, sat Gray up and found a folded knife clipped to the inside of his pants pocket, a knife that is lawful under Maryland law, Mosby said. Previously, police have said they found a switchblade.

The officers put the knife on the sidewalk and then put Gray back down on his stomach, when he started to flail his legs and scream, Mosby said.

Nero held Gray down until Goodson arrived driving a police transport van. Miller, Nero and Rice then put Gray inside.

While Gray was being transported, Miller, Nero and Rice took him out of the wagon and put flex handcuffs and leg shackles on him. After that stop, they put Gray back into the van on his stomach without a seatbelt.

At one point during the van ride, Goodson requested help checking on Gray. Porter, 25, who joined the force in 2012, responded. Both he and Goodson checked on Gray. Porter helped Gray from the floor to a bench in the van, but neither Goodson nor Porter requested medical attention or put a seatbelt on Gray.

White is the second-highest officer charged in the Gray case. She met the van at its stop to pick up the second person. White, 30, was responsible for investigating two citizen complaints about Gray's arrest. She joined the police in 2010 and was recently made a sergeant in January 2015, police said.

During the stop, White, Goodson and Porter saw Gray unresponsive on the floor. White "spoke to the back of Gray's head" but he did not respond, Mosby said. The group did not call for medical assistance.