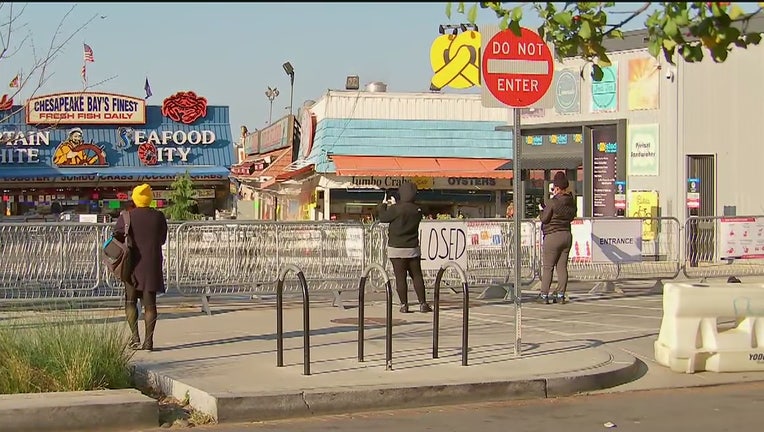 The Department of Consumer and Regulatory Affairs (DCRA) forced the market to close late in the day last Saturday April 4th after photos and video surfaced on social media showing a packed seafood market with very little social distancing being practiced.

While food is listed as an essential business, the images of crowding appeared even after District, Maryland and Virginia leaders had enacted “Stay at Home” orders as part of the region’s fight against the coronavirus pandemic. The photos went viral online, and sparked calls by even D.C. celebrity Chef Jose Andres to shut the market down.

Captain White Seafood City’s Facebook page on Friday said they were planning to re-open again from 8 a.m. to 8 p.m. on Saturday, and with new safety measures put in place.

Seafood lovers began to line up since at least 7 a.m.

However, by 10 a.m., the market was still closed as frustration grew outside. Those in line were at least social distancing and wearing masks.

“My lower back is starting to hurt a little bit, standing on this concrete. But like she said, I love seafood,” said Autumn Milburn, who was one of the first in line.

She came with her cousin, Alexandra Howard.

“I got here at 6:50 as well because I don’t like being around a lot of people. Even before this, like the coronavirus, we would come out here before they open. So yeah, that’s why we were here early to avoid the crowds,” Howard said.

Both ended up yelling to the people behind them to back up once the market was finally opened.

D.C. Police and members of the National Guard’s Military Police were also at the market helping to maintain the line outside.

Police told FOX 5 they were waiting on the Market’s hired private security to open up the market Saturday morning.

“We are currently waiting for security to arrive,” read part of a post to Captain White Seafood City’s Facebook page.

FOX 5 also saw two DCRA officials taking photos of the new safety measures before the market was opened to the public.

“I don’t even know why I’m out here for real, ‘cause you can go to the supermarket and get the same thing you’re getting from here,” said a customer who didn't give his name.

After the emergency closure, city officials later said they would give the Fish Market operators a chance to re-open. The owners had to submit an enhanced COVID-19 safety plan that had to be approved by DCRA.

Lawrence Allen saw those viral photos last weekend and told FOX 5 “It was appalling. It really was. Like six feet. That’s for safety … it’s not all about the fish.”

Allen still came hoping this weekend would be different. He was planning to get seafood for his Easter dinner and told FOX 5 that’s what his 86-year-old mother wanted.

“This is an outing for me. Once I go here, back to the house, that’s it for the day,” Allen said.

Security guards told customers they were only allowing 20 people in at a time. Customers are being told they cannot enter without a mask or face cover. The owners of Captain White Seafood City are also asking people to leave their kids and senior citizens at home. One sign reads only two members per family would be allowed in.

“Everything is moving great!!,” read an afternoon Facebook post from Captain White Seafood City’s page.“Please call ahead if you can. It will make our time faster. We had a great shipment of crats just come in!”

Here’s the list of markets DCRA approved to remain open.